The coronavirus crisis isn't the only challenge a married San Diego couple is facing as they temporarily live apart. 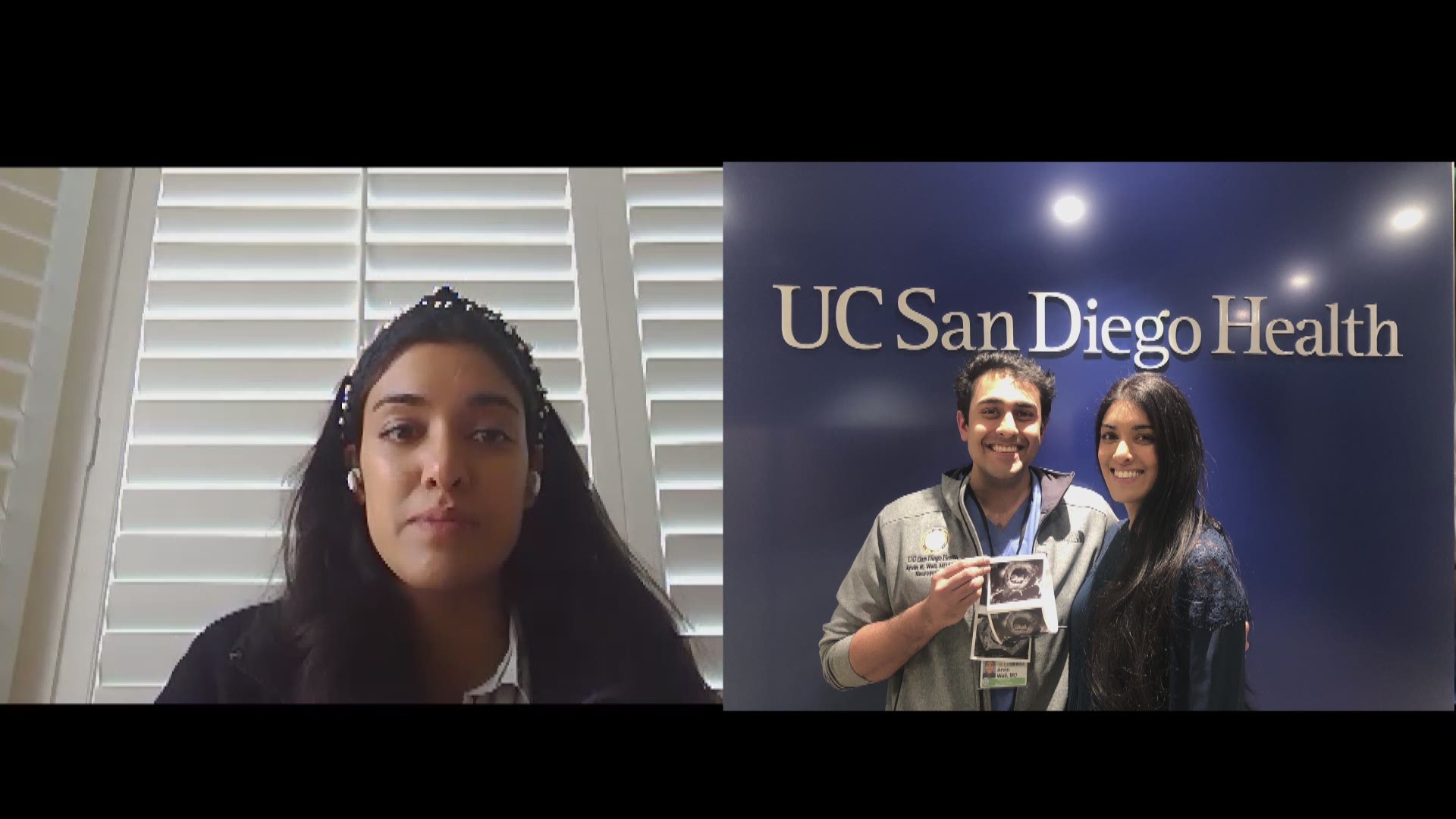 Many people have been joking online that 2020 couldn’t be crazier. Well, when Milli Desai and Arvin Wali kicked off the new year in January, the UCSD alumni had no idea just how much their lives were about to change.

The young married couple both work in healthcare here in San Diego, fully emersed in the COVID-19 pandemic that’s devastating the United States.

Desai is wrapping up medical school at UCSD. She’s involved with clinical research, which would normally involve seeing patients in a clinic, but those appointments have moved over to telemedicine. The plan is to be an OBGYN.

“The happiest moments of my education have been seeing families kind of unite and rejoice over a birth,” said Desai.

Desai is set to start a clinical rotation in June, but like many people’s 2020 plans, that’s up in the air right now.

Wali works 12 days on, then two days off. He’s a resident physician in neurosurgery.

“He is still continuing to do neurosurgical intervention, surgeries, being in the operating room, and also a lot of their patients come in through the emergency room or are housed in the ICU of the hospital, so he’s definitely in a place that we would call ‘high exposure,’” said Desai about her husband.

In an all-hands-on-deck time that seasoned doctors say is like nothing they’ve ever experienced, a worldwide pandemic is quite the way for new and soon-to-be doctors to kickstart their careers.

However, there’s a catch. Desai is no longer just a provider, but a patient. Around the new year, Desai and Wali learned they, too, would get to experience that aforementioned joy of childbirth. Desai is pregnant with their first child.

“It’s an interesting time to be able to feel the effects very personally,” said Desai.

The couple read medical literature about cases coming out of China and Italy and ultimately decided that the most responsible - but maybe not the easiest - decision was to shelter-in-place separately for the time being. Yes, some pregnant women have contracted and recovered from COVID-19, but there’s still so much information scientists don’t know yet.

“It became clear that we needed to make these more difficult decisions,” said Desai.  “We know we’re not the only couple or family in healthcare to do this.”

However, life doesn’t pause during a pandemic, and that includes doctor’s appointments.

“On a personal note, not even speaking as a provider, I mean, I’ve had to go in for my own OB appointments as a patient, and that’s also scary because I know on the medical side of things what’s happening,” said Desai.

While many people are opting to speak with their doctor over the phone or over video chat, some appointments require an office visit, like an ultrasound. Desai recently went to see her own doctor for an ultrasound, fingers crossed Wali could safely come, too.

“My husband, Arvin, tried to come with me and wear a mask,” said Desai. “It’s an exciting time for both of us. It’s our first pregnancy. We were finding out the biological sex. We both wanted to be there and he wasn’t allowed to enter - even the waiting room.”

Wali found out the sex of their baby over FaceTime.

Desai knows from the provider perspective how important it is to limit and screen hospital visitors right now. However, that doesn’t necessarily make these milestone events easier as a patient.

“Not having that [support system] is really heartbreaking as a patient,” said Desai.

Fortunately, Desai said their family is supportive during this difficult time. Arvin’s side of the family all works in healthcare, too, so the family is relying on video calls to stay in touch.

“The idea that ‘it takes a village’ is so important right now, especially for families in healthcare,” said Desai. “I think without support, we wouldn’t be able to get through this time.”

Living apart during their first pregnancy isn’t what the couple expected, but Desai said she will have a greater sense of gratitude when they can finally reunite.

“Some of the little things, like cooking a meal together [or] going on a walk together, physical touch, just being able to hold somebody’s hand,” said Desai.

The baby is due in August, and Desai hopes that by then, the world will be a calmer place and that Wali will be allowed inside the delivery room, so the two can finally experience the beautiful reason that inspired Desai to be a doctor for themselves.

RELATED: Some hospitals limiting or banning visitors in delivery rooms during birth

“From a patient perspective, it’s heartbreaking and not be able to share this with your loved ones,” said Desai.

A married couple living apart certainly isn’t ideal, but Desai has a sense of optimism quite literally growing inside her. In the meantime, Desai and Wali know that they have patients counting on them now more than ever.