Police are investigating a suspicious death at a home in Carlsbad Wednesday morning. 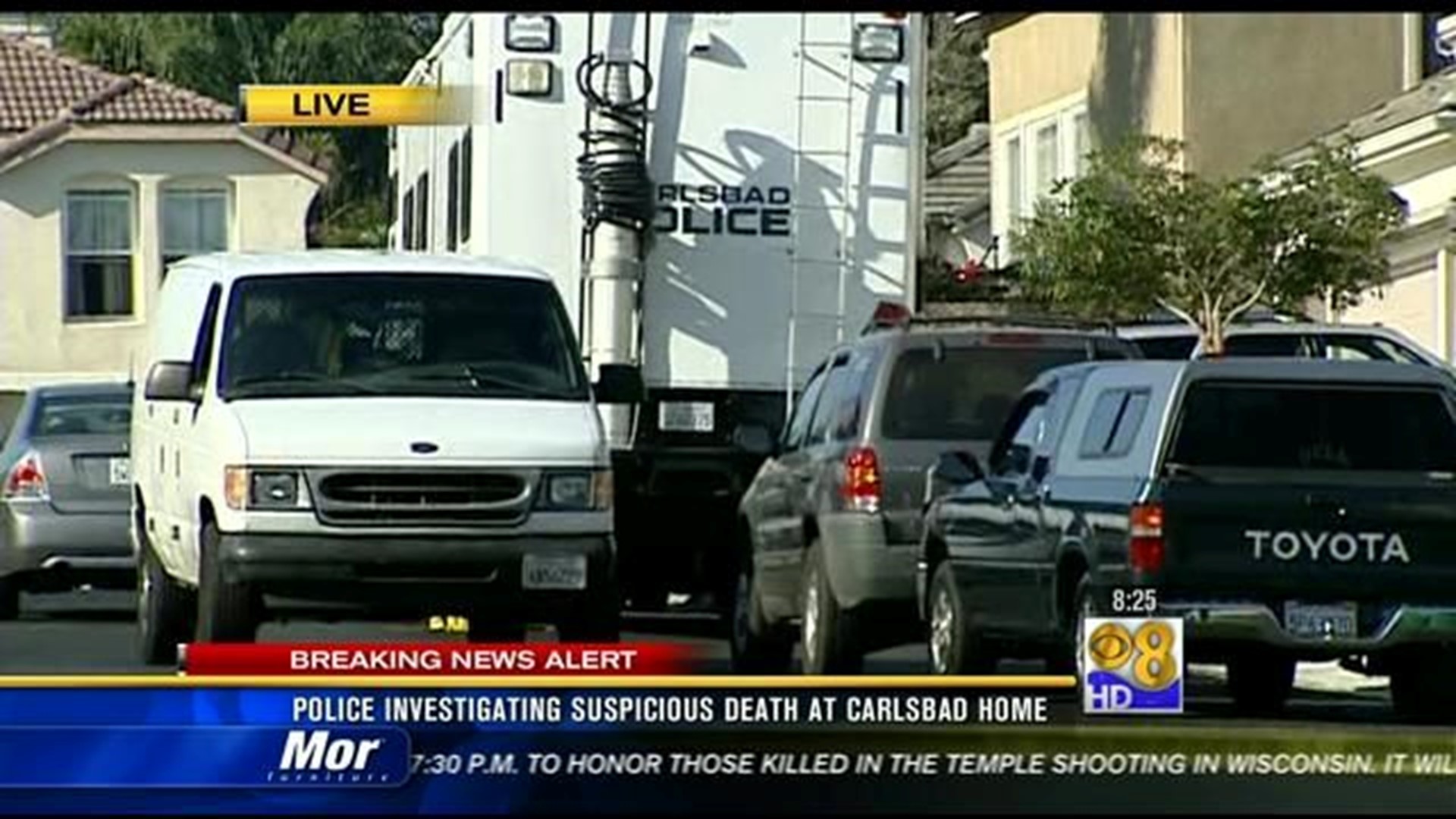 SANTEE (CNS) - A Carlsbad mother of three was behind bars Thursday and facing a murder charge over the death of her estranged schoolteacher husband.

Julie Elizabeth Harper, 39, surrendered to detectives at her father's Scripps Ranch home on Wednesday afternoon, about 16 hours after police found the body of Carlsbad High geometry instructor Jason Harper in the couple's house, according to police.

Julie Harper, who was with her three young children at the time of her arrest, was booked into Las Colinas women's jail in Santee and was being held without bail pending arraignment, scheduled for Friday afternoon.

Patrol officers conducting a welfare check shortly after 11 p.m. Tuesday found the 39-year-old teacher's body in an upstairs room at his family's home in a gated neighborhood east of Rancho Carlsbad Golf Course. Authorities declined to disclose a suspected cause of death.

Along with their mother, the couple's children -- a daughter, 6, and two sons, ages 18 months and 8 years old -- were absent when police arrived at the Badger Lane residence to check on Jason Harper at the request of an unidentified caller. Also missing were the woman's gold Toyota Sienna minivan and a silver Ford Expedition SUV belonging to her husband.

Julie Harper arranged to turn herself in to police through an attorney, Lt. Paul Mendes told reporters.

The homemaker and former real-estate agent reportedly filed for divorce a week ago, accusing her spouse of 11 years in court papers of being profane, aggressive and violent toward her.

The couple's children were taken into protective custody and were expected to be released into the care of a relative, Mendes said.

THIS IS A STORY UPDATE. For an earlier story, read below.

SAN DIEGO (CNS) - A woman, who was missing along with her three young children when authorities discovered the body of a man believed to be her husband in their Carlsbad home, was found Wednesday afternoon in Scripps Ranch and arrested on suspicion of homicide. She will be arraigned Friday on murder charges.

Detectives located Julie Elizabeth Harper, 39, her daughter and two sons in the 11200 block of Lakerim Road about 3 p.m., according to police. Harper was detained for questioning prior to being booked into county jail, and her children were taken into protective custody.

Officials have not yet publicly confirmed the identity of the dead man, but the superintendent of Carlsbad Unified School District, where Harper's husband, Jason, is employed, issued a statement suggesting that he might be the victim of the suspected slaying.

Officers conducting a welfare check shortly after 11 p.m. Tuesday found the body of the man, believed to have been in his 30s, at the Harpers' home in a gated neighborhood on Badger Lane, east of Rancho Carlsbad Golf Course.

Police described the death as an apparent homicide.

For the next 16 hours, law enforcement agencies throughout the San Diego area were on the lookout for Julie Harper and her children, 18-month-old Joshua, 6-year-old Jackie and Jake, 8. Authorities declined to disclose her relationship, if any, to the deceased man.

Police had said the woman and children might be traveling in a gold 2008 Toyota Sienna minivan registered to Harper, or a silver Ford Expedition belonging to her husband.

A statement released this morning by Suzette Lovely, superintendent of Carlsbad Unified School District, suggested that the body found in the home might be that of Jason Harper, a geometry teacher at Carlsbad High.

"We are in close communication with the Carlsbad Police Department concerning a death in the community," Lovely stated. "We have unconfirmed reports that one of our employees may have been a victim in this incident. At this time, we are awaiting confirmation and further details from officials in law enforcement. As information becomes available, we will be sharing this with our staff and (the) community."

According to published accounts, Julie Harper, a former real estate agent, filed for divorce last week, accusing her husband in court papers of being profane, aggressive and violent toward her and their children.

Throughout the morning, detectives could be seen carrying brown bags out of the family's home.