A tiny insect is posing a huge ecological and economic threat to San Diego County. 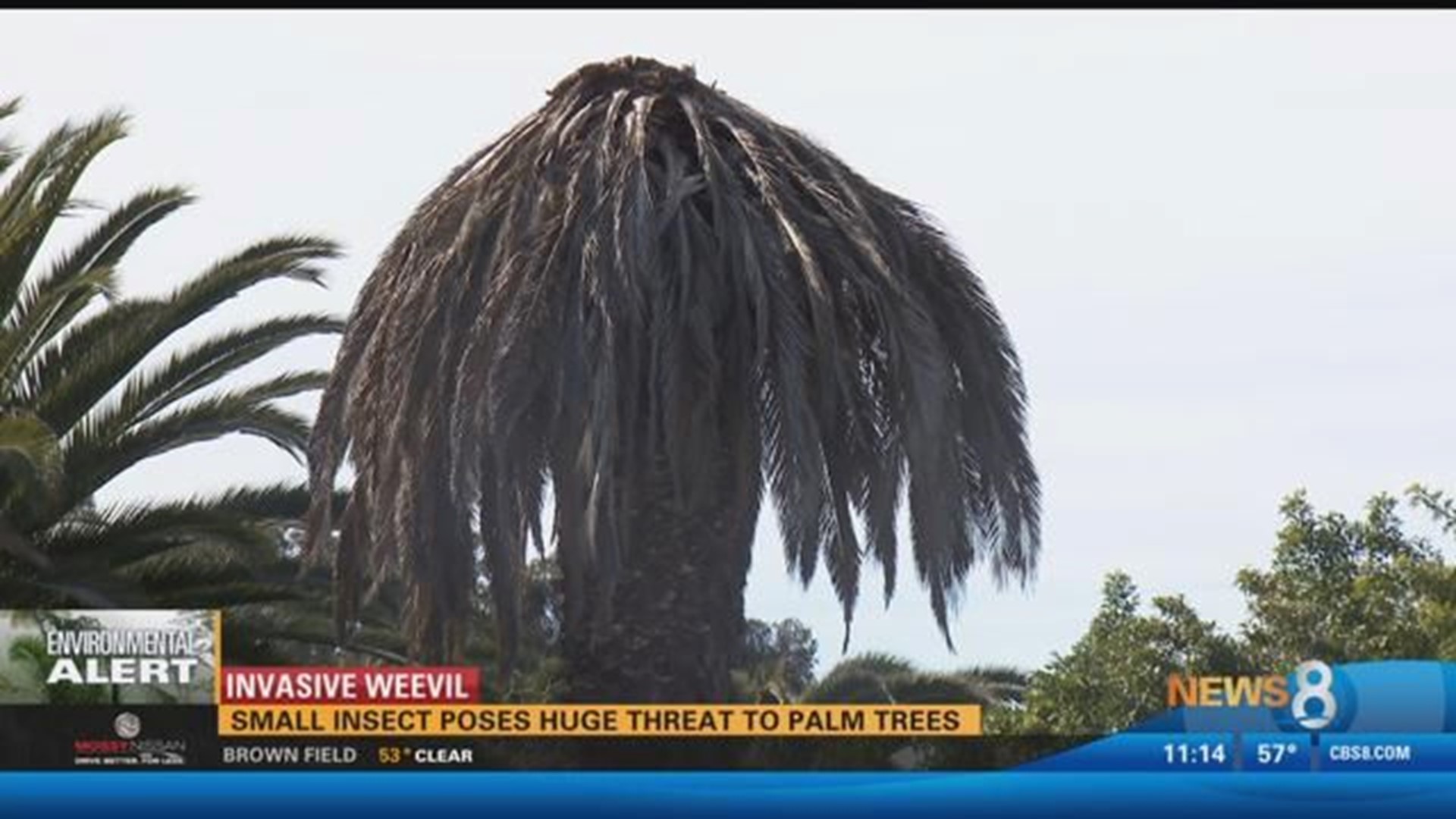 The South American Palm Weevils have made their way north from Mexico and are having a destructive impact on palm trees in the San Diego region – a multi-million dollar industry in Southern California’s landscape.

Mark Hoddle Ph.D., is the director of Center for Invasive Species Research at the University of California Riverside. He said, “Long nosed weevils use their nose to drill a hole in the palm tree and females lay eggs in the tunnel.”

There is no eradication, only control and most often too late for aggressive pesticides for the non-native palm tree.

According to Hoddle, ten percent of the palms die every three months at the Sweetwater Reserve in Bonita. “We are going to see hundreds, thousands of Canary Island Date Palms die over the next couple of years,” he said.

A brown mushroom umbrella like Canary Island Date Palm tree is usually a sign the tree has been infected by the South American Palm Weevils. “You see the fronds, are falling down instead of going straight up,” said Hoddle.

Hoddle, a leader in the research, guided News 8 crews through the Sweetwater Reserve, known as the incubator. He has ten traps and says about 20 to 30 weevils a month are caught in each trap.

The insects are believed to have begun migrating from Mexico in 2011 in San Diego County. Hoddle said they spread to San Ysidro, Imperial Beach, Mission Beach to El Cajon – threatening a $70 million ornamental palm tree industry.

Between the county, City of Imperial Beach and San Diego, about 20 infested trees have been removed. Residents are encouraged to save surrounding palm trees by having their infected ones removed – a move that could most homeowners more than $1,000. The infected palms also pose a hazard, the crown could fall causing damage.

Arborist Clint Davis said he removed an infected palm tree with a larvae last week in Imperial Beach. He will remove his neighbor’s tree next week. “I hate to see these trees dying.”

The County Agriculture, Weights and Measurements said it plans to remove 50 infested Canary Island Palms from the Sweetwater Regional Park and is educating arborists.

A spokesperson for the City of San Diego said it is working with UC Cooperative Extension and recommends people use the Get-It-Done App to report dead or infested palms.

The University of California Riverside Entomology Department also set up a webpage encouraging  people to learn more on the South American Palm Weevil and report dead or infested palms.