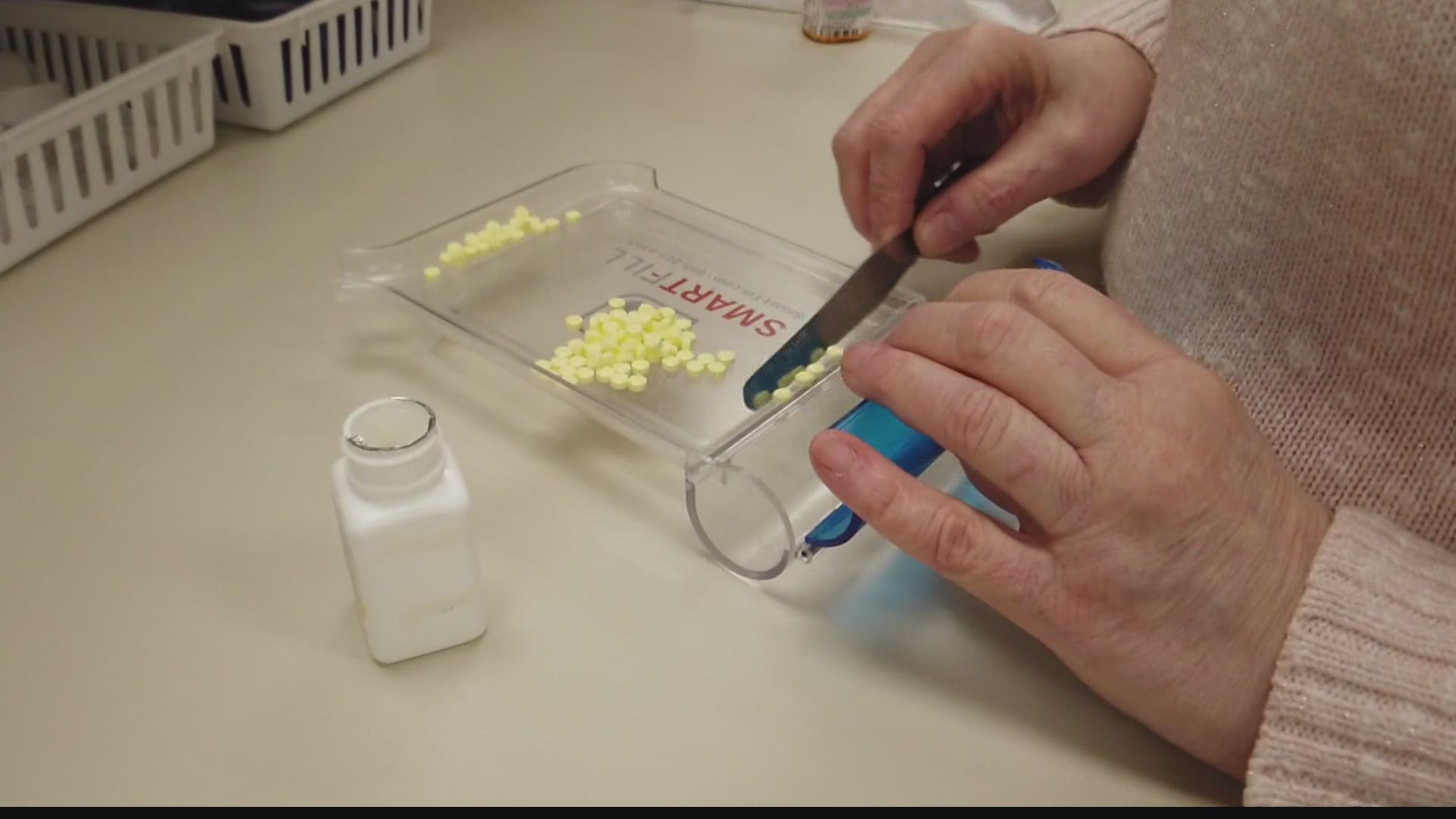 FISHERS, Ind. — The two white pills sitting in the palm of Maria Miller’s hand may be quite small, but the Fishers mom says they play a huge a role in her life. The pills are for her teenage son, Nick. They control his Epileptic seizures.

“It’s life-saving. There’s nothing else you can say. These are life-saving medications that allow my son to function and live,” Miller told 13News while sitting at her kitchen table. “It’s everything. This medication is everything for him.”

But Nick’s medicine comes at quite a cost. The average retail price for a 30-day supply of his Aptiom is more than $2,200 a month. The Millers are lucky to have good health insurance, and yet their out-of-pocket cost for the seizure medication -- $540 each month – is still hard to swallow.

“I don’t think people completely understand the sacrifices families have to make just to afford medications like this,” Nick’s mother said, trying to hold back tears. “We are everyday people. There are savings cards you can get from the drug companies, but we don’t qualify because we are middle class and make too much money. So we’re just expected to find a way to make things work.”\

Making things work just got harder. Last week, in a phone conversation with Maria Miller, 13News shared news she was not prepared to hear. The next time Miller fills her son’s prescriptions, the cost will be even higher.

In January, drug maker Sunovion raised the list price of Aptiom by 4.7%. It is the drug’s third price hike in the past two years, and the Millers say it will increase their out-of-pocket cost by at least another $100 per month.

“This drug is already so expensive, how could they even…?” she said, pausing to collect her thoughts. “I’m angry. I’m furious. We are literally held hostage, and they’re using my son’s health to hold us hostage. I don’t understand how this could become ok.”

The Millers are not alone. Millions of Americans could be in for sticker shock the next time they visit their pharmacy. Since the beginning of the year, 13 Investigates has learned drug makers have quietly raised the prices on hundreds of medications, including some of the most popular drugs that Hoosiers rely on every day.

Credit: WTHR
After insurance, the Miller family pays $9 for each one of these Aptiom pills.

The price hikes do not come as a surprise to Tori Marsh. As the research director at GoodRx, an online service that gathers current prices and discount information about medications, Marsh has been tracking the rising prices of drugs for years.

“Every year in January and July, drug manufacturers raise the price of hundreds of drugs, most of them expensive brand name drugs,” she told 13News. “Unfortunately, these price hikes are par for the course for the drug industry, and we’re seeing them even during a pandemic.”

What does surprise Marsh is the number of drugs that increased this year. She says this January was the worst on record.

“Since the first of the year, we saw over 800 drugs increase in price by an average of 4.6%, and that’s the largest number we’ve seen since we started tracking this,” Marsh said.

Credit: WTHR
Drug makers increased the price of some of the nation’s most popular brand name prescriptions in January.

“That is the official price set by the manufacturer, and the list price ends up affecting all other prices that consumers pay. When we see a list price increase, it often trickles down to the consumer,” she explained.

Last week, while visiting Blue River Pharmacy in Brownsburg, 13News saw two customers who came to pick up medications leave without at least one of their prescriptions because of the high cost.

“It’s heartbreaking to see some of the patients who cannot afford their medication. We run into that on a daily basis,” said Blue River pharmacist and co-owner Julie Acra.

She says most consumers don’t even realize their prescription costs increased in January because of high deductibles and out-of-pocket costs that customers expect to see when their insurance coverage resets at the beginning of each year. Acra also said most drug companies really don’t seem to want customers to know the prices of their drugs.

“When somebody gets a prescription, they just really have no idea about how much it’s going to cost, and a lot of times, doctors don’t know either,” the pharmacist told 13News. “The U.S. doesn’t really require drug companies to be transparent. I think we can do better.”

Credit: WTHR
After insurance, the Miller family pays $9 for each one of these Aptiom pills.

To find out why drug prices continue to rise year after year, 13 Investigates reached out to the Pharmaceutical Research and Manufacturers of America (PhRMA), an industry trade group that represents drug makers. The organization did not respond to our questions. Neither did Sunovion, the drug maker that that raised the price of Nick Miller’s medication 15% over the past few years.

13News also contacted pharmaceutical industry researchers, analysts, pharmacists and customers, who each offered their own insights, theories and explanations for the steady rise in drug prices.

“The drugs are the same drugs as last year, the same drugs as ten years ago, yet they are more expensive, and we know drug prices are higher over time not always because of innovation,” said Dr. Inma Hernandez, associate director at the University of Pittsburgh’s Center for Pharmaceutical Policy and Prescribing. She published a 2019 study that revealed annual price hikes -- not research and development – are to blame for the increasing cost of prescriptions.

“The fact that a drug is 10% higher in cost or in price than last year, it doesn’t mean it’s 10% more effective. It just means that because payers are willing to pay for them, that [the drug makers] keep increasing the price,” Hernandez said. Her research showed many of the largest price increases involve drugs that have been on the market for many years, not just newer drugs that come with high price tags due to manufacturers needing to recoup their research and development costs.

The professor also said consumers are at a disadvantage because, unlike most other products which have prices based on supply and demand in a free market system, prescription medications are sold in what she calls a “dysfunctional system.”

“The pharmaceutical market is far from being a perfect market because consumers are not really able to choose products. In order for the market to work in regulating prices by itself, there has to be a wider offering of products, and because of patents, there’s very little competition in the pharmaceutical market,” Hernandez said. “Since there is very little [price] regulation, we have this situation of a dysfunctional market that fails to keep drug prices under control. We’re paying more because they know they can get away with it.”

The Miller family understands the dysfunctional market that offers Nick few options. There is no alternative for Aptiom. While there are other anti-seizure medications available on the market, none of them work as well for Nick’s specific type of Epilepsy.

“It literally stops his seizures from happening and has no side effects. Zero. None,” said his mother. “So what are we going to do: choose the medication that we know works or try something cheaper that’s going to have lots of dangerous side effects? We’re left with those choices, so really, there is no choice.”

Even more frustrating for the Millers, Nick and many other people who are prescribed Aptiom require 1000 mg of the drug each day to effectively prevent their seizures. But Sunovion produces the medication only in 200 mg, 400 mg, 600 mg and 800 mg pills. It means the Millers must pay for two Aptiom prescriptions each month – 600mg and 400mg – for Nick to get the required 1000 mg daily dose he needs, doubling their monthly cost. Again, they have no other option. The drug maker did not respond to 13News when asked why it does not offer a less costly option for consumers who require a 1000 mg maintenance dose of the medication.

Despite recent talk by politicians about controlling drug costs, attempts by Congress to regulate drug prices have gotten little traction in Washington. Some state legislatures are now looking to address the issue with tough new legislation to curb drug prices, but because the federal government has massive clout while negotiating drug prices for Medicare, many industry experts believe effective price reform must be driven on federal level.

And Acra believes some drug companies increased prices to compensate for a slow sales year in 2020. She said because of the COVID-19 pandemic, patients visited their doctors less frequently, resulting in fewer medications being prescribed and sold. At the same time, GoodRx points out many drug manufacturers have annually raised the price on hundreds of medications every January – well before coronavirus swept across the globe.

Consumers like Maria Miller believe profits and greed are behind the ongoing prescription price increases. Drug prices have been rising three times faster than the rate of inflation, according to another study conducted by Dr. Hernandez at the university of Pittsburgh.

“If this really is all about bigger profits, that’s a huge problem. It should be criminal because there are people who can’t afford these drugs and have to say ‘I can’t take this.’ That’s the reality and it’s wrong,” Miller said. “There needs to be transparency about how and why these prices increase.”

How to battle rising drug prices

Credit: WTHR
Each of these medications increased in price about 5-6% in January.

Despite rising drug prices, little price regulation and limited competition in the pharmaceutical market, most consumers do have some options when it comes to finding lower costs.

“Consumers aren’t stuck. What it means is they have to do some due diligence on their part,” Marsh told 13News.

Here are some of the tips offered by GoodRx and local pharmacists to help you reduce the high costs of prescription medications:

Talk to your pharmacist

Consult with your doctor

Know before you go

Does a generic medication work for you?