They said they weren’t able to move the wedding to next year without paying thousands of additional dollars, or they were told they canceled when they didn’t. 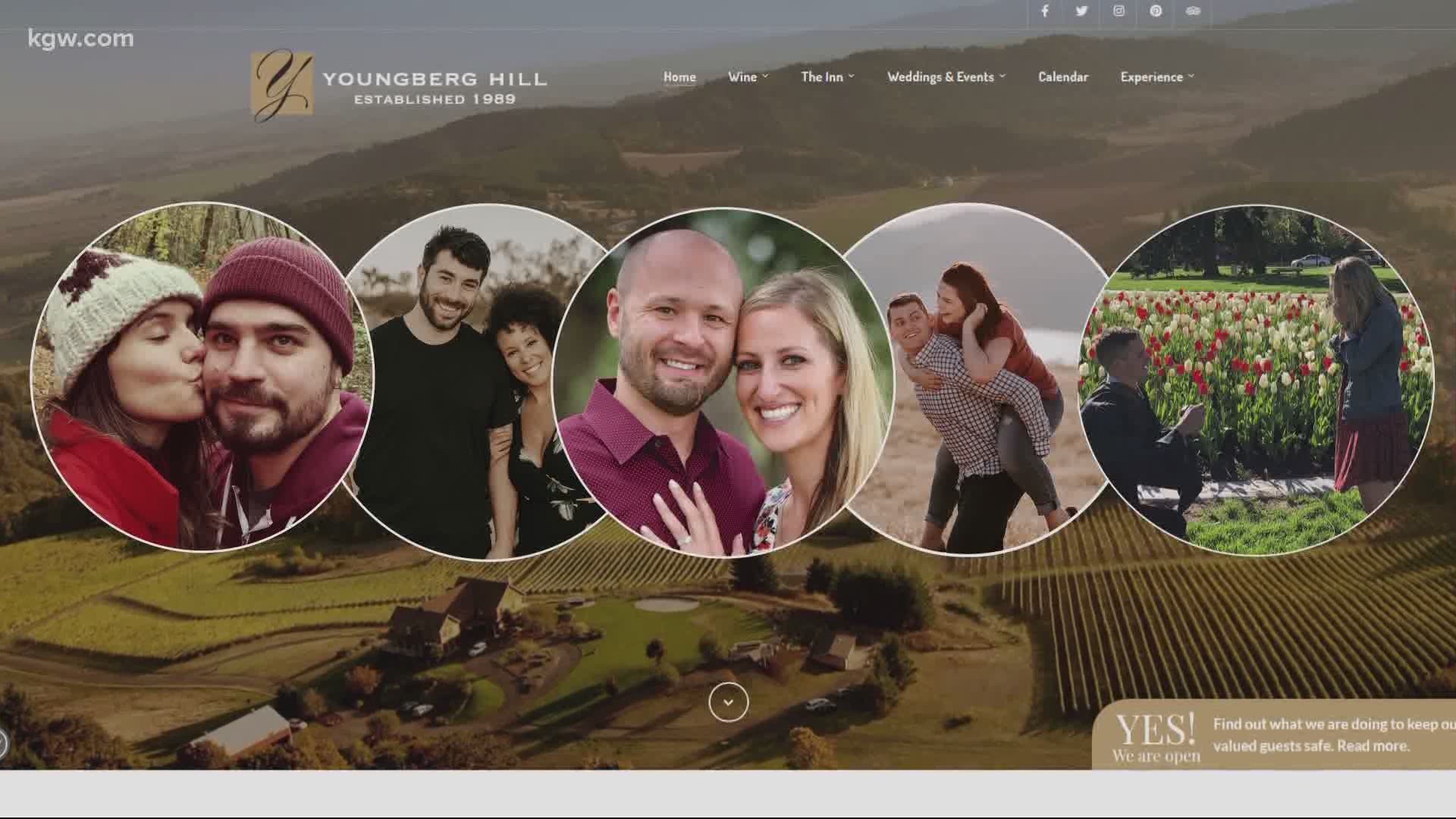 MCMINNVILLE, Ore. — Five engaged couples from all over the country said they’re out thousands of dollars after planning to get married at Youngberg Hill Inn and Winery in Yamhill County.

The couples connected over social media and said they had very similar experiences with the venue site manager and owner Nicolette Bailey.

The couples did an interview with KGW after they said they couldn't reach an agreement on refunds or partial refunds. They said they weren’t able to move the wedding to next year without paying thousands of additional dollars, or they were told they canceled when they didn’t.

“So, it was really, I think, affirming for all of us to get together and just recognize that we're not alone and we're not, we're not crazy,” said Jasmine Eoff.

Eoff and her fiancé Patrick Compton were supposed to get married next month at Youngberg Hill. They tried to move the wedding to July 2021 but were originally told next July was already booked.

“If this is the worst thing that happens to us in our family, with all the health and economic issues that could occur this year, if this is the worst, I'll count my blessings. But this wrong thing is still wrong regardless of that and should be made right,” said Compton.

“It's a lot of money. I mean, we're currently living with his parents to save up money for, you know, the wedding itself as well as a house. So, to be out that amount of money is, you know, it's, it's a hit for sure. And it's disheartening,” said Eoff.

Allie Connall and Alex Weeks were supposed to get married at the family-owned winery at the end of March. At the time, Yamhill County was still in Phase 1, which meant no large gatherings over 25 people. Connall said moving it to the same day in 2021 would have cost an additional $8,400.

“And there's so many people who are being so amazing throughout all of this that it's just like, it really makes me sad to realize that there are people out there who are taking advantage of it, specifically for financial motivation,” Conall said.

Hilary Cadish and Halsey Schider live in San Antonio, Texas. They’re out more than $14,000 after planning to get married in McMinnville in August.

“We just can't have our wedding per the contracted amount of people in the guests. Not to mention we want all our guests and family to be safe and we're just not able to do that this coming August,” said Shinder.

Dawn Holden's stepdaughter was also supposed to get married at Youngberg in July. She’s been acting as the liaison between the couple and venue.

“Of course they would love to get married July 31, don’t get me wrong. But with just knowing it's the risk doesn't outweigh the reward. So, the risk of having all these family members, friends from different locations coming together for a wedding, health-wise, it's just not a risk we want to take,” said Holden.

And Michaela Zapell and finance Mark Kuryloski are out $4,900. They were set to say, "I do" at the end of August but with half her guests having to fly from the East Coast, she said she felt pressured to cancel.

“And there was really no, no awareness of it. Very, very aloof and she gave us absolutely no option to reschedule for next year,” said Michaela.

Nicolette Bailey would not do an on-camera interview but sent KGW a statement saying:

"I know the situation this year has been challenging for many people all over the country. Many families who have small locally owned and operated businesses, like ours, are also greatly affected by this as well. We have been and will continue to be as flexible as possible regarding our cancellation and postponement policies. Based on our contract we typically only allow rescheduling through the end of the calendar year; however, we have now extended it into 2021 to help as many people as we can. We have also extended our postponement options to anyone who doesn’t feel comfortable having a wedding this year, even though we can do their event. We are currently hosting weddings and events and following all the ordinances, CDC and OHA guidelines. We are fortunate that our event space is over 12,000 square feet so there is a lot of space to be safe and socially distance. We are also working with many other venues, supporting each other to offer successful and safe events. On behalf of all the event venues who have been so horribly impacted, we appreciate your support."

Yamhill County is now in Phase 2 of Oregon’s reopening plan. According to state rules, indoor and outdoor venues with six feet of physical distancing and other measures in place, can reach an occupancy limit of up to 250 people.

RELATED: Here's the framework for Phase 2 of Oregon's reopening plan

KGW, through a public records request, found the Oregon Occupational Safety and Health Administration (OSHA) received a safety complaint about the winery June 17,  saying the venue is not following the guidelines by having more than 250 guests at one time.

Bailey said this about the OSHA complaint:

"We follow all state ordinances and are in compliance with CDC and OHA guidelines.

"We require customers to agree to follow all laws and ordinances when renting the property, they are responsible for the individual design or layout decisions."

RELATED: Road trips expected to be most popular way to travel this summer amid pandemic