"The San Diego Police Department is committed to being open and transparent with the public." - SDPD. 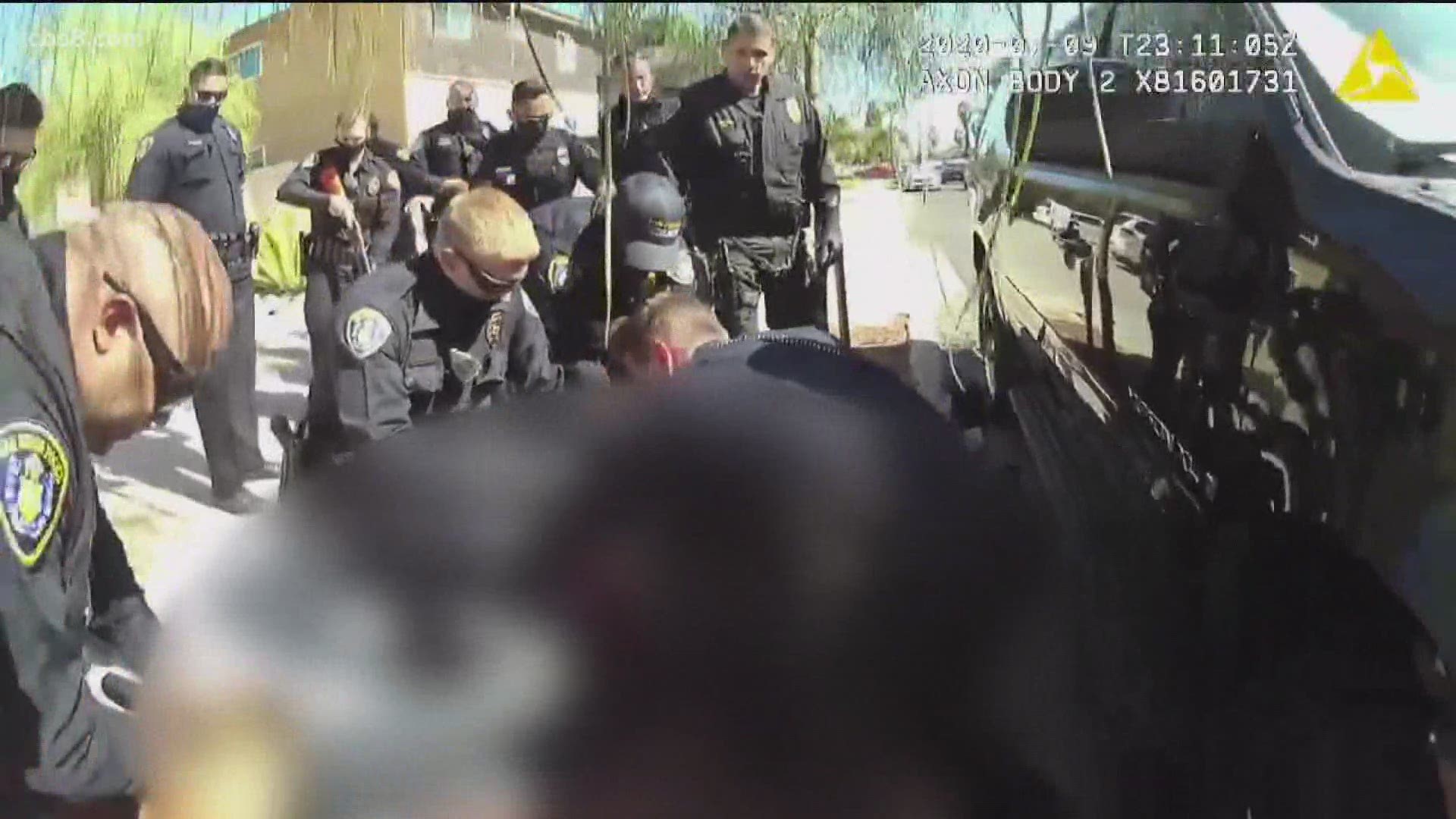 Police received a 911 call about 3:50 p.m. Thursday of a man with a gun in the 4300 block of Menlo Avenue in Talmadge. Two women in the area said a man with a gun confronted them, worked the slide of the gun as if he were loading it and pointed it at them, according to Lt. Matt Dobbs of the San Diego Police Department.

The women drove off and called police. When officers arrived, the women directed them to the man who by that time was in the 4200 block of Menlo Avenue, near El Cajon Boulevard, Dobbs said.

In the video, as one police officer approaches the man, the officer shouts: "You in the black shirt, get down on the ground!"

San Diego police officers can be heard ordering the man to the ground and to put the gun down several times.

One officer tells the man to get away from the gun. "Don't look at the gun and grab it," an officer is heard saying. Several officers can then be heard ordering the man to not touch the gun.

One officer orders the man to "take a f*****g step back from the gun."

The man is seen in the video and appears to be standing next to a car and tree and swaying with his head down. He appears to be holding up his pants because an officer orders the man to let go of his pants.

Police officers continued to order the man to step away from the gun and walk backwards towards them.

One officer tells the man, "Stop fixing your belt and walk towards us." Officers continued to order the man to move away from the gun.

As the moments go by, police officers request a bean bag.

At one point one officer tells the man: "Walk away from the gun, bro. We don't want to hurt you." It's at this moment when the man bends over to allegedly pick up the gun and officers are heard shouting, "put it down," "put the gun down," "drop the gun."

Officers reported the man pointed the gun at them, but that is hard to tell the body camera video. One officer can be heard saying: "F*****g shoot him."

At that moment, the officers open fire on the man, and the man can be seen falling on the ground.

Cellphone video provided to police by a resident on Menlo Avenue shows the moment the man bent over to pick up the gun. The resident stops recording once officers fire their guns.

Amid the gunfire, one officer is heard yelling: "Put it down."

The man was struck at least once and fell to the ground, but was still moving and holding the gun, which he pointed again in the officers' direction, prompting a second round of gunfire.

Moments later, the gunfire stops and the man is on the ground, not moving.

Officers moved in to take him into custody and began life-saving efforts. Paramedics from San Diego Fire-Rescue relieved officers and continued life-saving attempts, but the man died from his injuries.

The name of the suspect was not disclosed.

San Diego police officers determined the weapon the man had was an air-soft gun.

A total of seven officers fired their weapons. None of the officers are being identified, but all were assigned to Mid-City Division and have been placed on administrative duty, Dobbs said.

In a statement, the police department said:

"The San Diego Police Department is committed to being open and transparent with the public."

Watch the video released by SDPD: 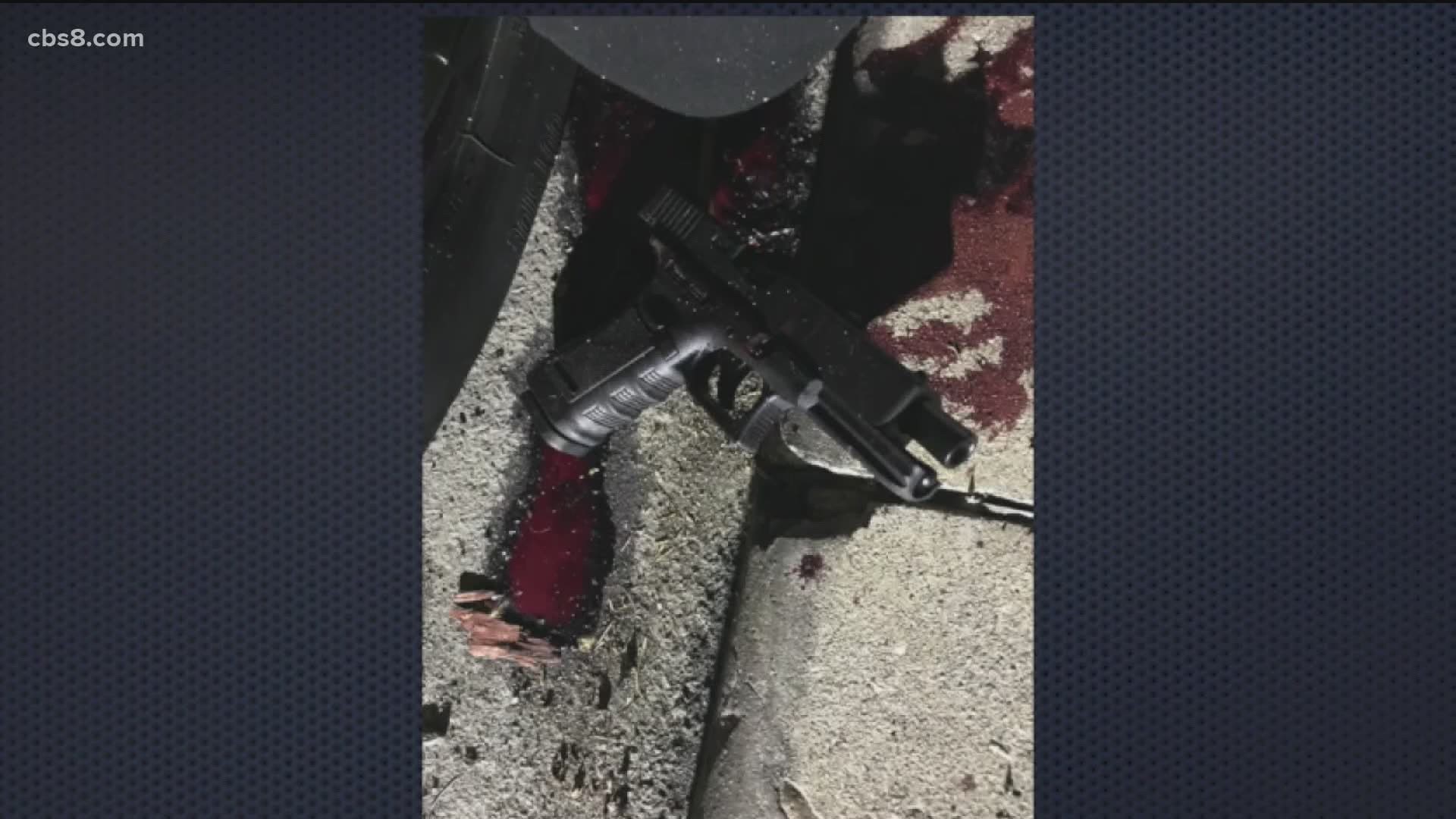