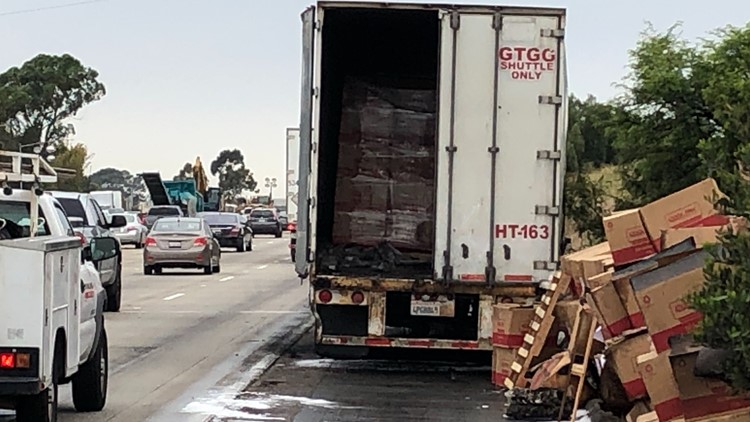 When firefighters arrived they found the flames had spread from the rear axle to the middle of the trailer, which contained strawberries in plastic boxes, the battalion chief said.
Author: CBS News 8 Team
Published: 8:01 AM PDT May 16, 2019
Updated: 9:33 AM PDT May 16, 2019

Dispatchers received a call around 5:30 a.m. from a person who reported seeing flames coming from the rear wheels of a semi truck on northbound Interstate 5 just south of Leucadia Boulevard, according to a California Highway Patrol incident log.

The man driving the semi truck pulled over, got out and went to check on the flames, but one of the rear tires burst and some of the tire pieces hit him in the face, Encinitas Fire Battalion Chief Mike Spaulding said.

The driver, whose age was not immediately available, was taken to a hospital for treatment of minor lacerations to his face, Spaulding said.

When firefighters arrived they found the flames had spread from the rear axle to the middle of the trailer, which contained strawberries in plastic boxes, the battalion chief said.

Crews doused the flames coming from the back of the trailer, but had to remove some of the boxes to access the fire in the middle of the trailer, Spaulding said. The flames were knocked down by 6 a.m., he said.

The right two lanes will have to be shut down again to tow the semi truck, Doerr said, adding that he did not have an estimate of when a tow truck would arrive.