Connie and Paul Gach ride their tandem bicycle regularly along this stretch of road, and they’ve noticed a lot of trash piling up in certain areas. 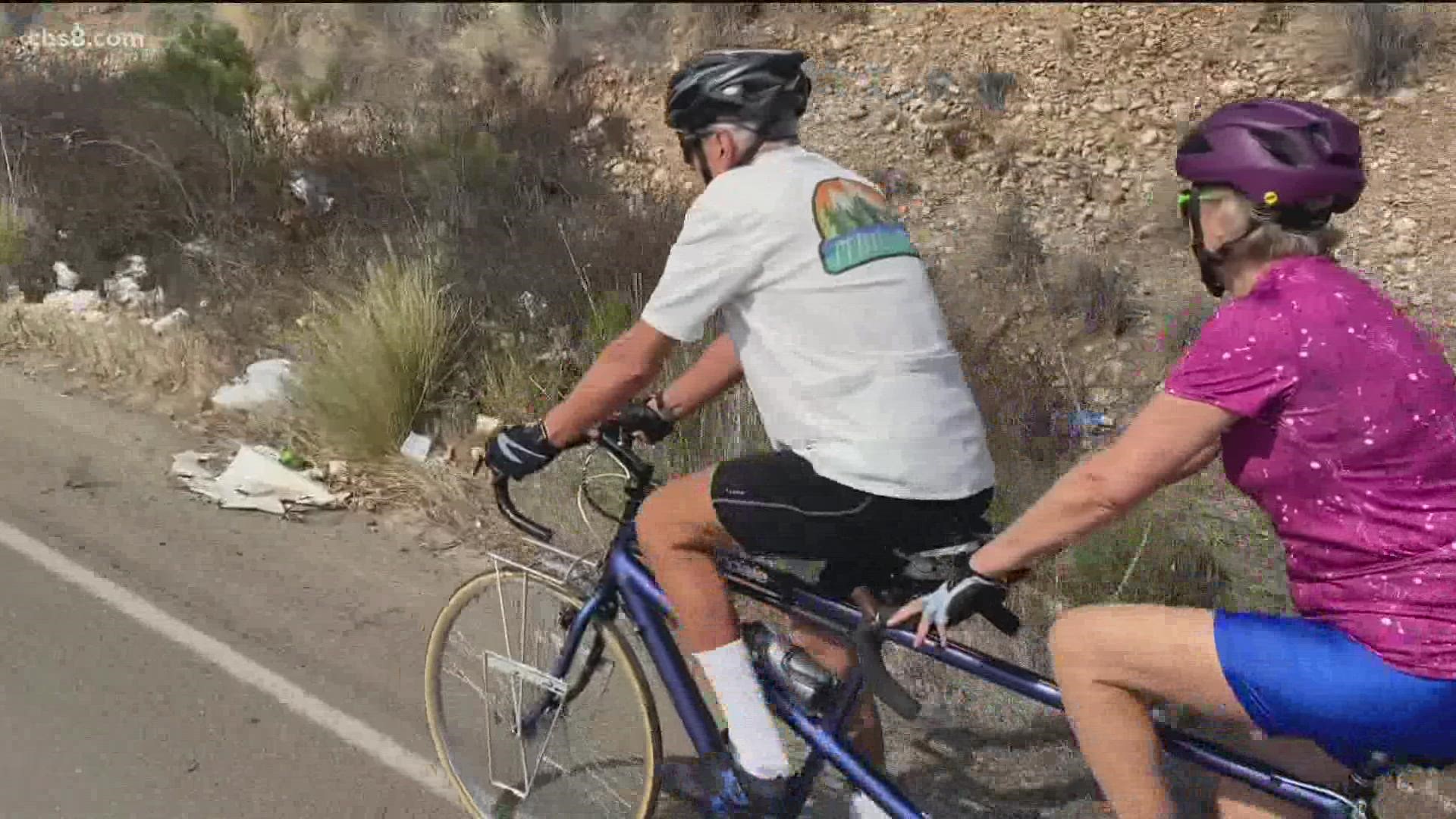 SAN DIEGO COUNTY, Calif. — On this Your Stories follow-up, cyclists informed News 8 that they’re fed up with all the trash and litter on the side of Kearny Villa Rd. "This is really disgusting having all this trash here and no one is taking care of it," said bicyclist Connie Gach. "We need to get it cleaned up."

Connie and Paul Gach ride their tandem bicycle regularly along this stretch of road, and they’ve noticed a lot of trash piling up in certain areas. "It makes me angry," said Connie. "We shouldn’t have to live like this."

Last week, News 8 aired a Your Stories report about litter on our San Diego freeways, and Paul saw that segment. "I got to thinking," said Paul. "I know a road where there is more trash than all the freeways combined."

He and Connie showed us all the trash and litter alongside Kearny Villa Rd running from Miramar Rd down to HWY 52.

They’ve both filed numerous Get it Done reports but the litter hasn’t been cleaned up, and they’re frustrated.

"I like to go out for a bike ride to enjoy myself and it’s disgusting to see that," said Connie.

During the pandemic, we’ve seen an uptick in roadside litter with more to-go food containers and single-use plastics.

"I saw a water bottle come flying out of a truck, so that’s what I’ve experienced and obviously people are throwing their cigarette butts out," said Connie. "It’s frustrating because you don’t know who to talk to or who to take this to."

A spokesperson for the City of San Diego cites a number of contributing factors including "the road’s proximity to I-15 and the litter that blows off the freeway, vehicles traveling to the landfill, and the fact that, much like I-15, the corridor is used by commercial, industrial, and other work vehicles that contribute more debris than your basic commuter vehicles."

This section of Kearny Villa Rd is cleaned by a street sweeper each Friday, but the City says it’s unclear whether they have jurisdiction for the area off the road because this stretch next to MCAS Miramar actually runs through federal property.

A spokesperson for MCAS Miramar tells News8, "The easement MCAS Miramar has with the city extends to almost 200 feet in width for some segments of Kearny Villa, and certainly throughout the immediate roadway, median, and areas approaching the fence line.  Trash removal, landscaping and other maintenance remains the responsibility of the city for their portions of the easement."

Meanwhile, Connie and Paul still ride by here every day, and they say all this litter ruins the beauty of the area.

"It kind of ruins the aesthetics," said Paul. "I go bike riding to get away from the world’s problems, and as I’m bike riding I see some more by the side of the road."

If you have a story you’d like to submit, email us at yourstories@kfmb.com.

WATCH: Are some San Diego County freeways cleaner than others?