ESCONDIDO, Calif. — An imitation census form is landing in mailboxes of San Diego residents. It looks like a census survey, but it's not from the U.S. Census Bureau. It's actually from the Republican National Committee (RNC), soliciting donations to President Donald Trump's campaign.

81-year-old Gary Maruska received one of the forms last week.

"I said, 'Oh here's my census forms for this year," he said when he opened up the envelope.

But the Escondido resident quickly realized that was not the case.

"As I started looking at it I saw it was not a census at all," he said.

The Air Force veteran says he could tell by the questions.

One of them asked, "Do you think President Trump is leading the nation in the right direction, or do you feel it is going in the wrong direction?"

Another one said, "Do you think Nancy Pelosi and the Democrat-controlled House are holding President Trump's agenda hostage and putting their political interests ahead of the good of our country?" 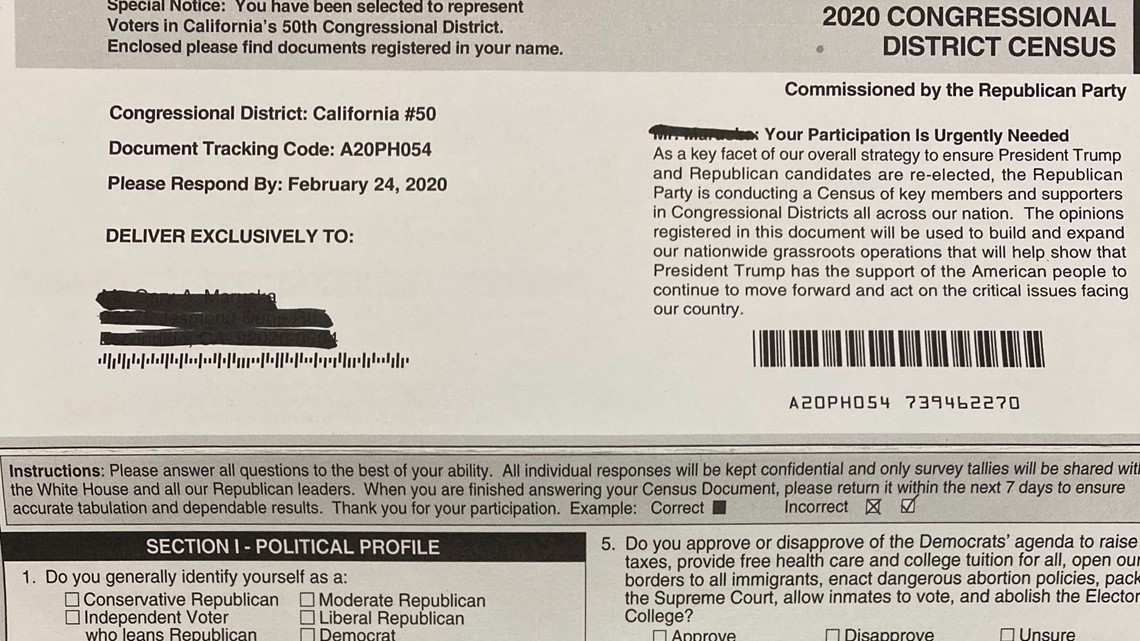 The forms were sent to Maruska by the Republican National Committee. At the bottom of the questionnaire on the back, there is a section calling for donations to Trump's re-election campaign.

As a registered Democrat, Maruska says he isn't sure why he got this.

"I just think this is a sneaky way of doing this," he said. "To call it a census rather than a questionnaire."

But identical mailers from the RNC have shown up in other states including Alabama and Montana. Officials in those states have issued a warning to residents. Photos of the mailers have also circulated on social media. The Republican National Committee sent News 8 this statement:

"Mailers are clearly marked that they are from the Republican National Committee," said the RNC official.

News 8 sent a copy of the mailer to the chairperson of the San Diego Republican Party, Tony Krvaric who said this is the first he's seen of them. He wrote: "Looks like a fundraising solicitation. They are taking a census of their supporters I guess."

Calls and e-mails to local and state officials went unanswered.

Terri Ann Lowenthal, a census expert who is now a consultant, served as staff director of the House census oversight subcommittee from 1987-1994. She sent News 8 this statement:

"Only the Postal Inspection Service can determine if a particular mailing violates the law. However, no political party, nonprofit, or business should be taking advantage of the census year to drum up support for their cause. The Census Bureau has an uphill battle as it is to persuade all Americans to answer the census. At best, use of the word 'census' for other purposes -- to get people to open your mailing, for example -- violates the spirit of the law designed to reduce confusion with official census materials, in my view."

Maruska actually used to work for the U.S. Census Bureau years ago.

"People should pay very close attention this year," he said. "After I received this I'll be paying much more attention to anything that says 'census.'"

According to the U.S. Census Bureau, forms for the official 2020 Census will go out in March. It wouldn't comment on this topic, but has been directing people to their website. See below for a sample copy of the 2020 Census Questionnaire in English and in Spanish.