A verdict will be announced Thursday in the trial of a lawsuit brought by the father of a 10-year-old boy who died after contracting an infectious disease from a pet rat purchased at Petco. 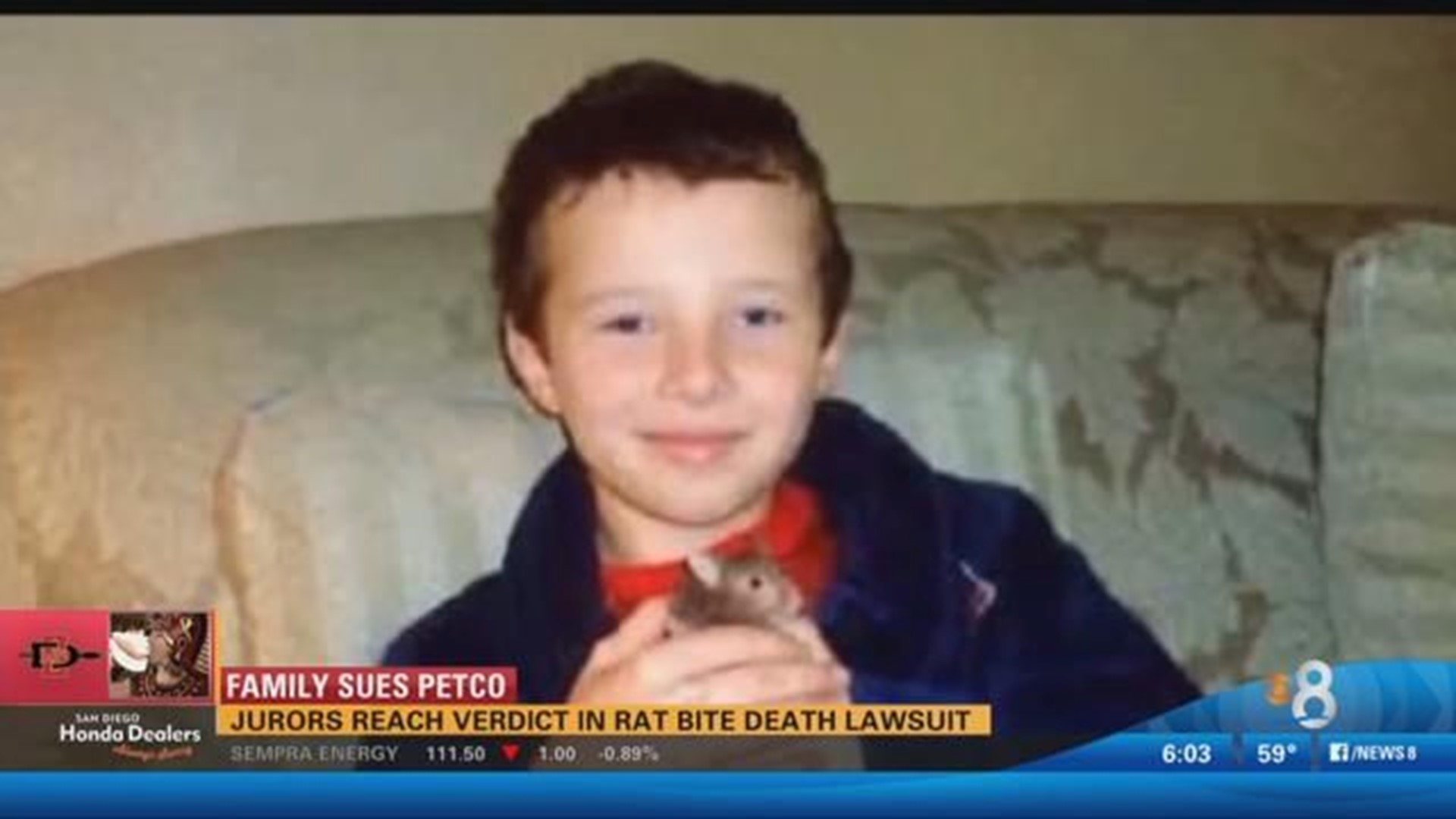 SAN DIEGO (CNS) - Petco Animal Supplies is not liable for the death of a 10-year-old Santee boy who contracted "rat-bite fever'' from a pet rat his grandmother bought for him in 2013, a jury decided Thursday.

Following a trial that lasted more than two weeks, jurors took only one day to determine that Petco was not negligent in the death of Aidan Pankey and that Petco did enough to warn consumers about the dangers of owing a pet rat.

Jurors also found that Barney's Pets -- which supplied Aidan's pet rat to Petco -- was not negligent in the boy's death either.

In his lawsuit, Aidan's father, Andrew Pankey, claimed Petco knew its rats are likely to carry "rat-bite fever'' but buried information about the infectious disease on the back of an animal companion card.

Plaintiff attorney John H. Gomez said there was no way to predict if a consumer was going to get an infected rat from Petco, which he said could have tested each rat before sale or stopped selling the rodents.

Gomez told reporters he was "surprised'' with the verdict and will appeal.

He said the reason the case went to trial was to highlight the fact that of the rats up for sale, 50 percent of them tested positive for carrying "rat-bite fever.''

Aidan Pankey's grandmother, Sharon Pankey, told reporters that Petco should do more to warn consumers of the dangers of owning a rat that might carry "rat-bite fever.''

"I feel sad because the message I'm getting is: 'buyer beware,'" said Sharon Pankey.

She said Aidan fell ill and died within two days in June 2013, before doctors could determine that he had the disease and before they could prescribe penicillin which could have saved his life.

"One of the things we hoped would come out of this [was] Petco would take more responsibility," said the grandmother said. "It was such a hard journey for us to go through. We really didn't want other people to have to go through that."

Petco attorney Kimberly Oberrecht told the jury that Petco was a leader in developing a test to see if a rat carried RBF. She said there was no way to determine what percentage of rats have the disease and there is no way to stop it.

"They (Petco) warn about it because they know they can't get rid of it,'' Oberrecht told the jury. "It's still very rare.''

According to the Centers for Disease Control and Prevention, pet rats are fine to be in a home as long as they are handled safely. Consumers are not supposed to put a rat in their face or share food with a rat, the Petco attorney said.

Jurors said it was the liability form Sharon signed that had a big impact on their decision.

The waiver stated quote "I release Petco from any and all responsibility related to illness, injury or damage that may occur from exposure to my pet."

"We felt they did warn accordingly," said juror Jerome Rideaux who admitted the fact a child died made this case more difficult..

"It was difficult to hear that but the judge said from the beginning you have to put sympathy aside and look at the facts of the case, so that's what we did," said Rideaux.

As for Aidan's grandmother, she said: "I'm grateful for the time I had with him and that's where I have to be right now."

And to consumers she warned, "Don't assume something you buy from a big company is safe."

She also said this fight is far from over as she plans to take Aidan's case to the CDC and to legislators.