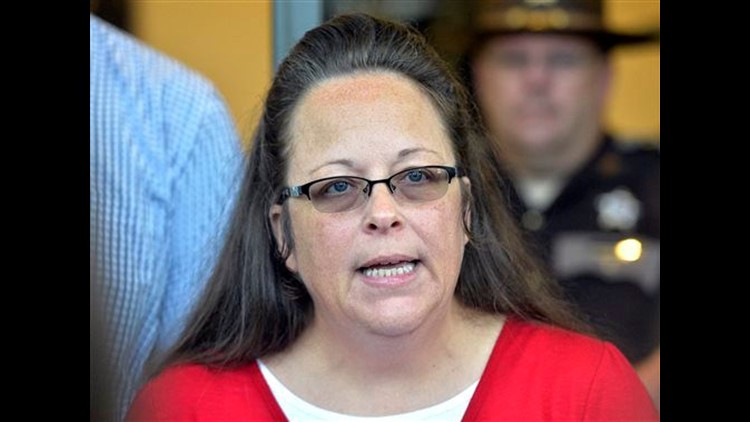 MOREHEAD, Ky. (AP) — Clerk Kim Davis returned to work Monday for the first time since being jailed for disobeying a federal judge and said she was faced with a "seemingly impossible choice" between following her conscience and losing her freedom over denyingmarriage licenses to gay couples.

With her voice shaking, she said she decided not to interfere with deputy clerks who will continue to hand out the marriage licenses in Rowan County, but Davis declared they would not be authorized by her and she questioned their validity.

In her first day back after a five-day stint in jail, Davis said she was torn between obeying God and a directive from the judge that "forces me to disobey God." Davis, an Apostolic Christian, believes gay marriage is a sin.

"I'm here before you this morning with a seemingly impossible choice that I do not wish upon any of my fellow Americans: my conscience or my freedom," Davis said, reading from a hand-written statement outside the courthouse where she works.

The first couple to come to the office for a license on Monday was Shannon Wampler and Carmen Collins. They stood at the counter for a half-hour, dozens of reporters at their back and microphones bobbing above their heads.

Deputy clerk Brian Mason — now sitting behind a sign that reads "marriage license deputy" — gave them a license despite his boss's objections and after a delay because of a printer problem. Protesters in the back heckled Mason, but he ignored them, initialed the license and shook the couple's hands.

One protester waved a Bible. Elizabeth Johnson from Ohio screamed, "Don't let Kim's five days in jail be in vain."

Davis sat in her office with the door closed and the blinds drawn. She became a hero to many conservative Christians when she stopped issuing the licenses after the Supreme Court effectively legalized same-sex marriage. Her profile reached a fever pitch when she was jailed, as protesters, presidential candidates and news crews from across the county descended on the small town of Morehead.

Davis said in her statement that marriage licenses would now say they were issued "pursuant to federal court order."

The governor, the attorney general and the county attorney have said the licenses are valid. Davis and her attorneys claim otherwise.

"I don't want to have this conflict. I don't want to be in the spotlight. And I certainly don't want to be a whipping post," Davis said. "I am no hero. I'm just a person that's been transformed by the grace of God, who wants to work, be with my family. I just want to serve my neighbors quietly without violating my conscience."

The issue has drawn some of the most fervent Christian activists from across the country. Their trucks are parked up and down the street, bearing signs that read "sodomy ruins nations" and "repent."

One truck, with a North Carolina license plate, has a poster-sized photo of an aborted fetus on the side. Others, from Iowa and Colorado, feature photos of two men kissing with doomsday warnings about the sin of homosexuality.

U.S. District Judge David Bunning held Davis in contempt and ordered her to jail Sept. 3 when she continued to refuse to issue the licenses. In her absence, her deputies issued at least seven licenses to gay couples and altered the forms to exclude Davis' name.

Mason, 38, said that he spoke with Davis only briefly Monday. He's worked for Davis for a year and a half, and his background is in retail, he said.

"It's a little crazy," he said of the several dozen video cameras trained on him. "But I try not to let it bother me." Mason declined to comment on his personal opinion on gay marriage, or whether he's issuing the licenses only because of the court order.

In her statement, Davis said: "I love my deputy clerks and I hate that they have been caught in the middle of any of this. If any of them feel that they must issue an authorized license to avoid being thrown in jail, I understand their tough choice and I will take no action against them."