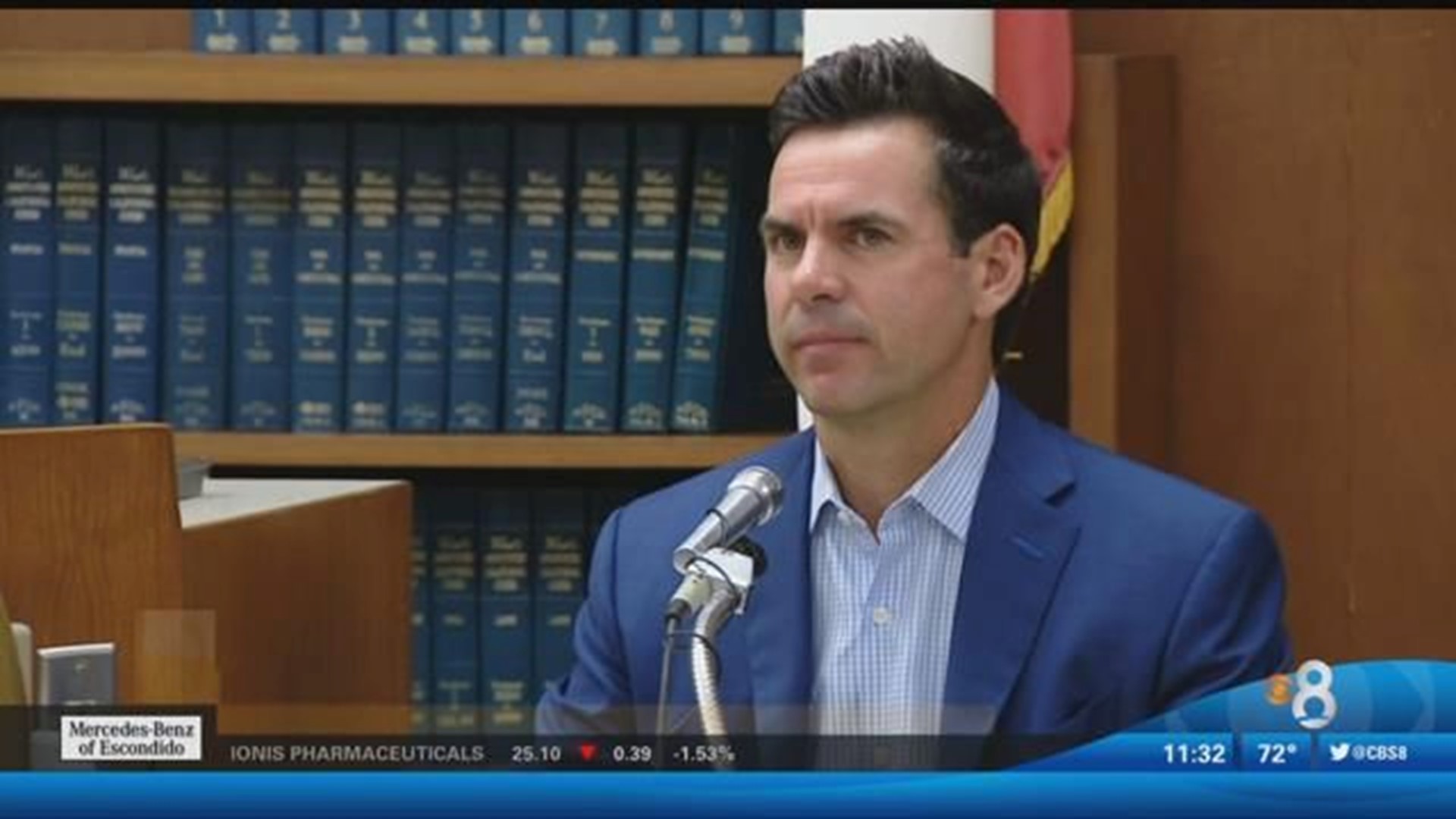 SAN DIEGO (CBS8/CNS) - CBS News 8 Sports Director Kyle Kraska was back on the stand Wednesday for a second day of testimony against the man accused of shooting him last year.

Mike Montana, 55, is charged with attempted murder for the ambush shooting outside Kraska's home in February 2015. On Wednesday, Kyle testified about how Montana had a look of determination on his face during the shooting.

Prosecutors say Montana sought to murder Kraska because Kraska wouldn't pay $2,200 for a house painting job Montana never finished. Montana's defense argues he was on medication at the time and never intended to kill Kyle.

On Tuesday, Kyle testified that a doctor told him he was in "really bad shape'' after being ambushed and shot several times in front of his Scripps Ranch home by a man he had hired to paint his house.

Kraska, testifying in the trial of Mike Montana, said the doctor told him six bullets had entered his body and that he would have to undergo emergency surgery.

Kraska said he told the doctor, "Please save my life.''

Kraska was shot in the bicep, leg and twice in the chest on Feb. 20, 2015. Bullets damaged his liver and one of his lungs.

Montana, 55, is charged with premeditated attempted murder and shooting into an occupied vehicle.

Kraska testified that he hired Montana to paint the outside of his home in the fall of 2014, with an agreement that called for $800 up front and $2,200 upon completion. The witness said he wrote a check for $800, but Montana failed to show up the first day and his attendance was not very good after that.

Kraska said Montana's work was "careless'' and the defendant started asking for more money, which Kraska refused to give him. Eventually, Montana said he was "broke'' and later quit, saying he couldn't finish the job, Kraska testified.

Three months later, Montana pounded on Kraska's front door at 6:30 a.m., leaving a letter under a mat that read in part, "It's in your best interest to pay me the money you owe me.''

"It was violent, it was scary,'' Kraska said of the letter.

A week later, Kraska said he was backing out of his driveway on his way to work about 3 p.m. when Montana pulled up behind him in his work van.

Kraska said Montana walked up to the driver's side of his car, motioned for him to roll down his window and said, "You should have paid me the $2,200.''

Kraska said he heard a "tremendously loud bang'' and saw Montana walk to the front of the car with a gun. Kraska said Montana fired at his car's tires, shot three times into the hood, then pointed the gun at him.

"I was being assassinated, it seemed like,'' Kraska testified. "It was chaos. It was beyond comprehension.''

Kraska said he bailed out of the driver's side door because he had nowhere to go, then  dove back into the car while "praying that he (Montana) was going to run out of bullets.''

The victim said he couldn't call for help because his cell phone was shattered, so he crawled into his cul-de-sac and waited for help. A friend pulled up and called 911.

Kraska said he spent six days in a coma and had to be brought back to life twice.

Defense attorney Richard Jayakumar conceded that Montana "systematically'' shot at Kraska's car, including the side, tires and hood, but maintained that his client "was not trying to kill Mr. Kraska.''

If Montana wanted to kill the victim, he could have shot him point-blank, the defense attorney said.

Montana told Kraska that he would have to get more jobs in order to finish the work on Kraska's home and Kraska took that to mean that Montana was quitting, the defense attorney said.

Jayakumar said Kraska jumped in and out of his car during the shooting and was caught in the crossfire.

The defense attorney said Montana was taking a "barrage of medications'' at the time. The defendant suffered from significant back problems many years ago and was prescribed powerful pain medications after two surgeries, his lawyer said.

Montana is charged separately with making threats in two other cases.

Zipp alleged Montana went to a Department of Motor Vehicles office in Poway in 2014 and, angry that a clerk refused to waive a fee, threatened to go home and get a machine gun and blow everyone up.

Montana is also charged with leaving threatening voicemail messages at the San Diego Rowing Club in late 2012 after officials asked him not to ride his Jet Ski through an annual regatta in Mission Bay.

The defendant faces nearly 38 years to life in prison if convicted.