A team of international scientists – including many based in San Diego – are on the Sea of Cortez this month trying to save a highly-endangered Mexican porpoise. 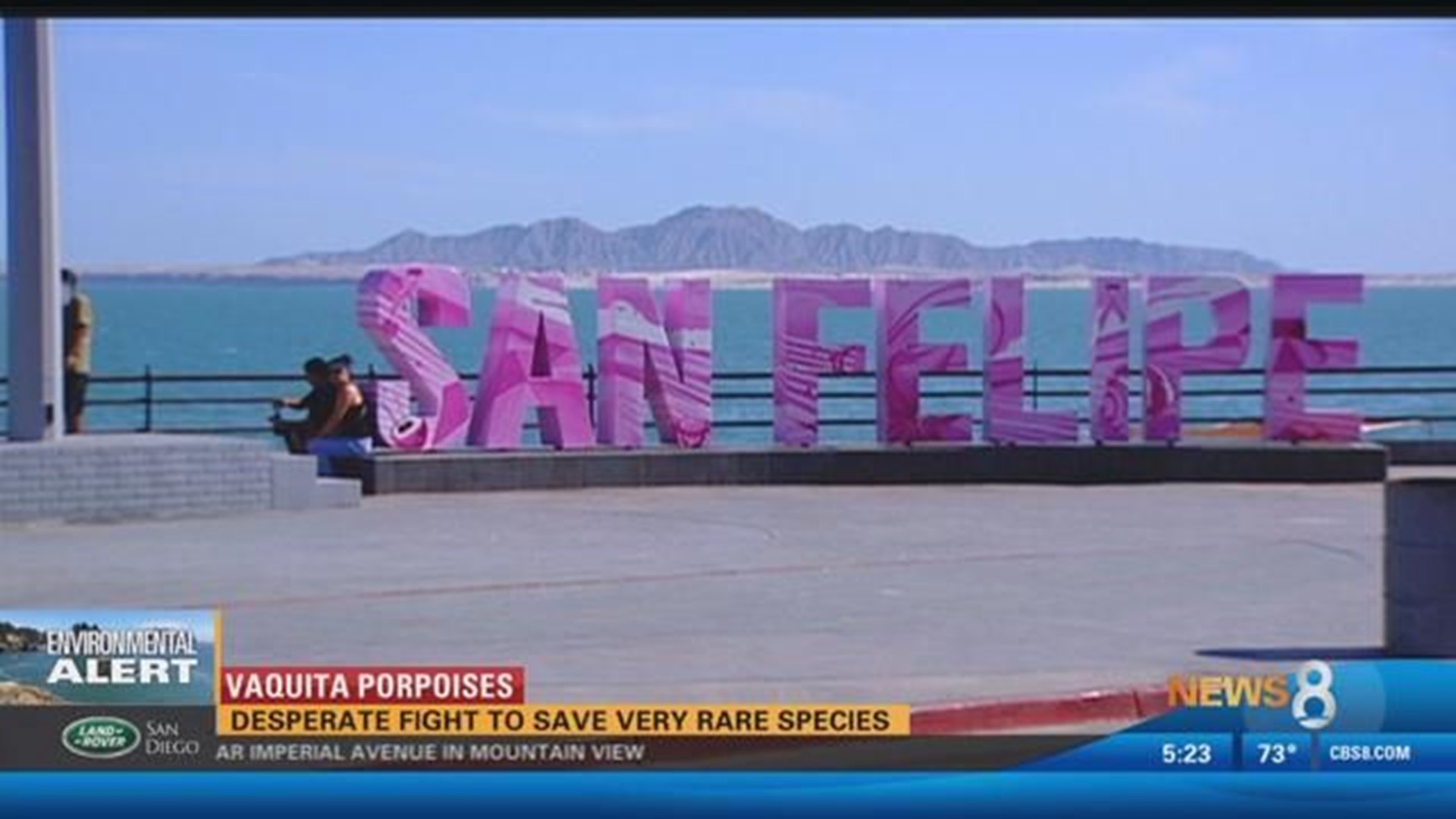 SAN FELIPE, Baja Mexico (CBS News 8) -- A team of international scientists – including many based in San Diego – are on the Sea of Cortez this month trying to save a highly-endangered Mexican porpoise species.

CBS News 8 meteorologist Shawn Styles traveled to San Felipe to take a firsthand look at the “rescue” of the vaquita porpoise.

The fishing town of San Felipe is only a five hour drive from San Diego.  It also is ground zero for an operation to round-up the last remaining vaquita and place them in a seaside sanctuary.

There are less than 30 of the extremely shy animals still in existence and they only live in the northern Sea of Cortez.

Last week, the team of 60 scientists announced they had successfully captured a 6-month-old, female calf just off San Felipe.

“It was an incredible moment to actually be with the animal that we've spend years thinking about how to protect and how to conserve.  It was just incredible,” said Frances Gulland, a marine mammal veterinarian for the rescue group, VaquitaCPR.

The team plans to catch as many vaquita as possible and relocated them to seaside breeding pens north of San Felipe, in hopes of bringing the tiny porpoise back from the brink of extinction.

Scientists caught the juvenile vaquita using lightweight nets deployed from the back of speed boats.

The team first spotted the calf with large binoculars, then radioed the catch team to move in and herd the tiny porpoise into the floating net.

“They can actually sit in the net and go up to the surface and breathe,” said Peter Heide-Jorgensen, one of the catch-team members who first handled the vaquita calf.

“We were on the animal like 30 seconds after it hit the net,” he recalled.

The team used a sling to pull the porpoise onto the boat, which transported the calf to a medical sea pen anchored about one thousand yards offshore.

When more intense medical attention is needed, the team can move the animals into a tented vaquita care center with indoor pools located on the beach.

Four U.S. Navy bottlenose dolphins – based in San Diego Bay – are also in San Felipe as part of the capture operation.

The dolphins were trained to track the elusive vaquita in open water and alert handlers to the location of the wild porpoises.

But for undisclosed reasons, the Navy dolphins were not used to locate the vaquita calf captured last week.

“So, I think the big success here is that you can catch the animals.  You can transport them safely.  And you can monitor their health and decide if you release them back or you keep them,” said Rojas-Bracho.

Within a few hours, however, they discovered a serious problem.

“The animal was continually stressed.  She never relaxed.  Her breathing rate and heart rate remained really high.  And her behavior was always very erratic.  So, she never relaxed,” said Dr. Gulland, the group’s marine mammal vet.

As a result, the first vaquita porpoise ever to be captured was suddenly in danger of dying.  It had to be released immediately back into the sea, in about the same area where it was found.

It was an outcome many opponents of the capture operation had predicted.

“We don’t support any kind of captivity,” said Jean Paul Geoffroy, a campaign leader with the Sea Shepherd Conservation Society.

The group believes vaquita porpoises can still thrive in their natural habitat as long as illegal gill nets are banned and retrieved from the Sea of Cortez.

“The behavior of the animal is completely different in captivity,” said Geoffroy, the Sea Shepherd leader.

“For us, it's more important to have the animal protected in their own environment than to have it inside a pool or tank,” he said.

Another marine mammal expert said it was irresponsible for VaquitaCPR to separate a vaquita mother from its calf.

Rick Trout, a former lead researcher for the Marine Mammal Conservancy, told CBS News 8 that the calf likely was going into “capture shock” before its release.

“Was this calf marked or tagged in any way to ensure its viability in future sightings? Or, was this unfortunate rare creature just irresponsibly dumped to die out of sight?” Trout wrote in an email to CBS News 8.

A VaquitaCPR spokesperson confirmed that the calf was not tagged or fitted with a transmitter before its release October 18.

The group’s veterinarian told us the calf’s teeth had just started budding in its mouth and it was unclear if the juvenile porpoise was still nursing from its mother.

“We don’t know how dependent it is on the mother’s milk versus how much food it’s actually taking.  It’s probably a mixture of both,” said Dr. Gulland, who also works with the Marine Mammal Center in Sausalito, California.

The effort to save the vaquita is having a devastating economic impact on the town of San Felipe.

Fishermen in the area are fed up with efforts to save the vaquita porpoise.  They set fire to a panga boat during a protest earlier this year.

Sunshine Rodriguez represents the largest fishing federation in San Felipe.  He says fishermen are even more upset now that a two-month ban on all boating activity has been imposed in the northern Sea of Cortez.

The boating ban has wiped out tourism in San Felipe.  A town known for its fish tacos suddenly has no fresh fish and no sport fishing revenue.

“We need to go back into the ocean.  We need work to have fresh fish in this town,” said Rodriguez.

The temporary ban on boating was put in place because VaquitaCPR scientists are out on the water trying to capture the very shy vaquita porpoises.

Boat noise scares the porpoises away and interferes with the group’s efforts to establish a vaquita captive breeding program.

Rodriguez admitted illegal totoaba gill nets set by poachers may be killing some vaquita but he said the nets used by commercial fishermen are not to blame.

“Our gill nets do not kill vaquita,” said Rodriguez.  The real problem is Colorado River water has been cut off from the northern Sea of Cortez, he said.

“The vaquita marina is not a marine mammal.  It is a fresh water mammal that used to live in the delta and that's why it's only based in this part of the world.  Otherwise, it would be living all the way down to Cabo San Lucas,” Rodriguez said.

“The illegal fishing is killing a few but what's driving (the vaquita) to extinction is the lack of water from the Colorado River,” he said.

VaquitaCPR scientists disagree because when they have recovered dead vaquita drowned in gill nets they appear to be, otherwise, perfectly healthy.

“The animals that we've necropsied have very, very low levels of contaminants.  They have no bio toxins, no infectious disease.  Currently, there's no evidence of any other cause of death other than drowning in nets,” said Dr. Gulland, the marine mammal vet.

High winds delayed vaquita capture operations for several days this week but efforts have now resumed on the open sea and likely will continue for two to three weeks.

If a seaside vaquita breeding program is successfully established, “it may be many years (decades) before it is possible to return vaquitas safely to the wild,” according to the International Committee for the Recovery of the Vaquita (CIRVA-9 report, May 2017).

VaquitaCPR and the Mexican government declined to release video of the capture and release of the vaquita calf off San Felipe.

The YouTube video below shows the capture and release of a harbor porpoise off Canada in 1997: