San Diegans will choose a new mayor on Tuesday, November 3. Hear what the candidates had to say about climate change. 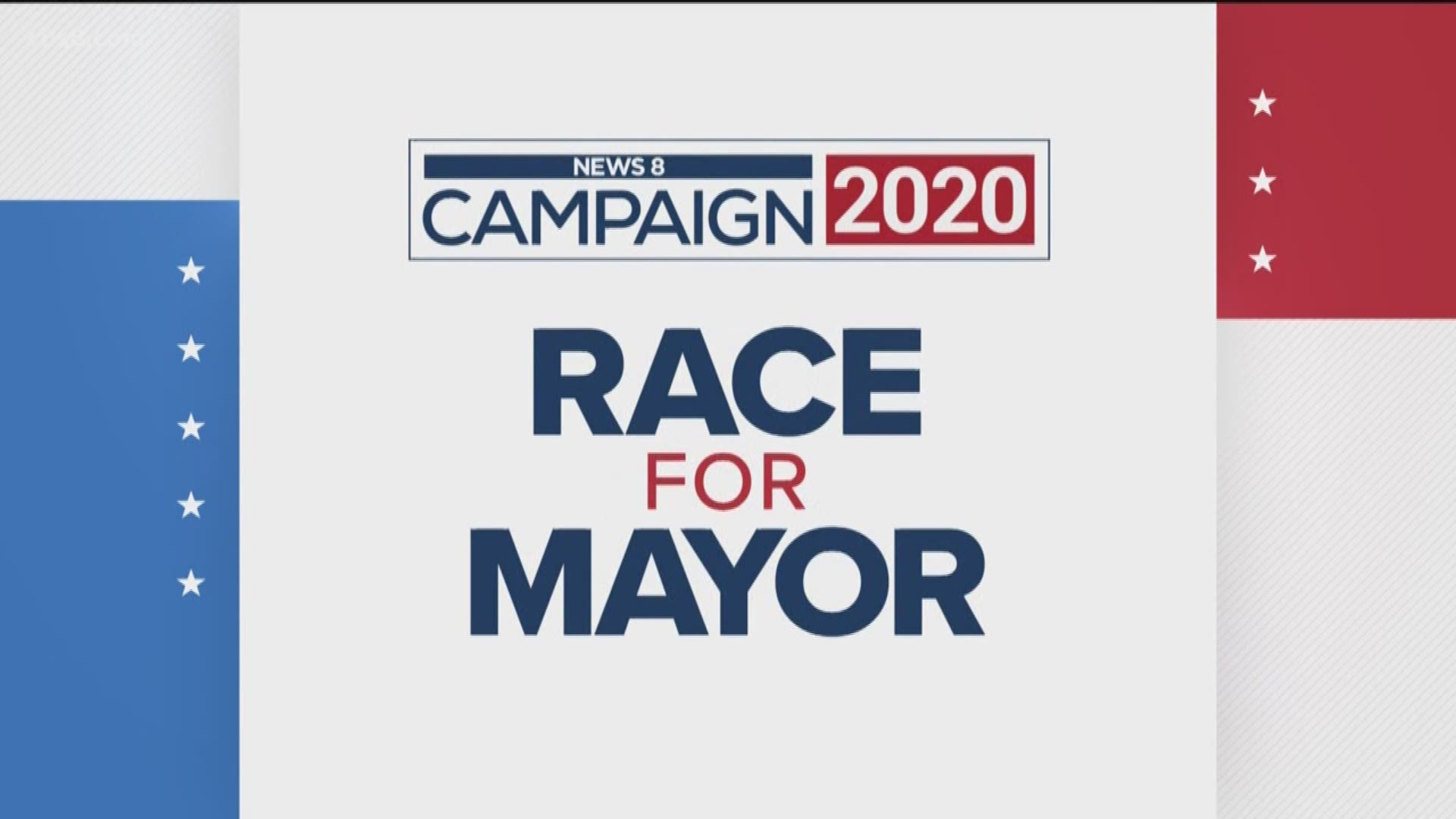 San Diego has a binding Climate Action Plan, which is very aggressive. And San Diego has been a leader in this area. And I was a leader in advocating for community choice energy, which is now underway. And eventually, we will all have a choice of where we buy our electricity. You know, San Diego Gas and Electric has the highest rates in the state.

Our beautiful environment, our beaches, bays,and canyons are one of our competitive advantages in attracting and retaining talent as well as, you know, important in terms of the lifestyle we all love. So that will be a priority of mine. One of the things that will be coming up is rewilding Mission Bay. And I have in my current budget priorities, asked that we look at the wildest version of our option for rewilding Mission Bay.

Climate change is a huge issue, obviously, all around the globe. The United States and people here in San Diego seem to be pretty climate aware, if you will. And we've made some changes already with some communities banning styrofoam, plastic utensils, things like that.

Where do you see us falling short? As far as being able to better look after our environment?

I actually served in the mayor's office. I did it for about eight months in 2013 and 2014 after the resignation of Mayor Bob Filner. During that time, besides pulling the government back together and getting us back on track. I had to do the day to day duties of the city's chief executive. And one of the things I did was author our city's landmark climate action plan. This is a bold, audacious plan. People somewhat criticized it back five years ago as maybe being too bold. But fast forward to today. A lot of cities in the San Diego area have adopted the same plan. The state of California has adopted the same plan. Six other states and Puerto Rico have followed our lead. What I'm trying to say is what seemed unthinkable just a few years ago is now being replicated elsewhere, it shows you what happens when San Diego leads. And my campaign is very much about making sure San Diego leads more often.

We have adopted that climate action plan of moving to 100 percent renewable energy by the year 2035. But I don't feel like the last five years this current administration and city council have acted with the urgency that's necessary. To give you an example,we are slowly moving towards community choice energy, basically giving consumers a choice on where they get their energy from and hopefully purchasing it for more renewable sources.

The city spent five years studying that when we knew full well that this is what the city needs to do. The next mayor is going to have the opportunity to build on actually ramping this up, of really bringing it online and bring those renewable energy sources into San Diego.

But also, Carlo, importantly taking the proceeds that come from that enterprise and reinvesting them back into our neighborhoods to make sure that green policies and green living aren't just the opportunities for the wealthy who can afford a Tesla or to put solar on their house, but really that every community can benefit from that. So you see electric charging stations south of I-8, that you see green jobs coming into other communities where maybe there isn't enough employment opportunities.

This is what community choice energy can do. This is what city policy adopted five years is making five years ago is making possible and with a bit more urgency, with a bit more bold leadership, I think we can maybe make that goal sooner than 2035 and then move on to other things that are important. And again, that really is about housing and transportation, the convergence of those issues to keep San Diego a leader in the fight against climate change. What sets us apart from many other communities is our natural resources, our beautiful climate.

This is worth fighting for and it isn't a zero-sum game. We can be good on the environment and good on the economy.

We have a climate plan that's that's included here in the budget. And here's the real problem. I look at the climate change as a political distraction. It distracts from the real problems that we have in this city. And I'd like to say, gee, if I had a balanced budget, if I was coming in with a mayor from a mayor who was competent and I didn't have a three billion dollar shortfall, yeah, I'd be working on a lot of programs that would address the climate issues. But before we could do that, we have to get our financial house in order. And more importantly, we have to provide housing for San Diego. And we have to deal with the homeless issue.

So we have to prioritize it. And I have to tell you, I have to tell the voters the difference between me and the elected officials is I'm not going to promise you the world. I'm not going to say I can do this, this and this. I'm gonna tell you what I can do as a mayor, and I'm gonna do it. I'm 72 years old. I plan on running two terms and that's it. I will never seek another government job in anywhere. I'm finished working for the government or, you know, an elected official. But it's important we prioritize and we look at our elected officials in terms of are they telling us what we need to hear or are they telling us what we need to do?

A large portion of our pollution in our waterways come from homeless encampments along the rivers and those types. So if you do some of the tough love cleanup with the homeless situation, that also helps with the environment. And we need to concentrate more on recycling and doing those types of things and public education. I mean, never once have I seen a product go out on its own and throw itself into the environment. I mean, you go to the beach or the Fiesta Island after a major holiday, and it's a disaster from people leaving stuff everywhere.

How do you feel about some of the things that been implemented already? Some cities taking the initiative to ban styrofoam, to ban plastic utensils? What do you think about ideas like that?

Scott Sherman: I'm not a type of person who has a quick reaction towards banning a product because the products usually don't cause a problem, it's the way people utilize the products that are the problem. I'd much rather see more common-sense solutions towards recycling and those types of efforts. I mean, David Alvarez and I worked for a couple of years to get styrofoam recycling here in San Diego. We got it passed.

We're going to start recycling Styrofoam because there's products that can be used from recycled foam. But then six months later, and people who voted for the recycling got on the political bandwagon of the day and decided to ban styrofoam. Wait a minute. Styrofoam still coming in. I mean, Amazon packages are loaded with Styrofoam that now can't be recycled and ends up in the landfill. Let's look at common-sense solutions to it and not just knee jerk reactions to grab a political headline.

We're trying to recycle our plastics. We're trying to clean up all oceans. Those are two basic primary reason solutions to global warming. I feel personally we should plant more trees to help with climate control.

So you think initially you would start an initiative to plant a lot of trees in San Diego is being one of the ways to do it - to wash the carbon dioxide out of the atmosphere?

Gita Appelbaum Singh: Absolutely. Yes. Look at what's going on. For instance, in Australia, we're having, you know, more carbon dioxide in the air, causing more fires everywhere. And as you know, San Diego is a fire hazard place too. So we definitely need more trees.

Some have talked about the transportation issue being related to it and the production of greenhouse gases. Is there something the city of San Diego can do on that end?

Gita Appelbaum Singh: Yes. Well, we definitely need to improve our transportation system. I believe we need a better mass transit. Right now, our trolley or bus system, it's disconnected. We need a more efficient system here. We need less cars on the freeway. Yes, we have a problem with overcrowding of cars on our freeway traffic. You know, smog could control the air quality control. Yeah, absolutely. We need a better transportation system.

My first priority is going to be to the bottom districts. Those districts that have been de-invested in over decades in this city and have the worst climate in the history of San Diego. I think that we just had -or- saw electric buses that were put out on the streets. And that's amazing. But as far as environmental justice, it means that those electric buses should have been put in the areas hardest hit by climate change so that we could have changed some of the impact that the current buses are doing. I think, again, building.

I'm sorry, not building, but planting trees. We need to plant trees by the millions in districts four, eight, and nine. Those districts have an alarming rate of carbon and other particles in the air, as we've seen when you go over those districts. There's like a gray tent, not like other districts that you go across and you can kind of see a clear sky. These are things that we need to change. We need to change them immediately. We can't wait another five years for those changes.

We have children that have a higher rate of asthma. The mortality rate is less for people who live in those three districts. They will die sooner than anyone in any other districts. And so that is an issue. It is an issue about, you know, human beings. This is about people's lives. And, you know, across this platform, we've had people talk about scooters and bikes and vacation rentals more than they've really talked about what's really impacting people's lives and the districts that are hit the hardest. Environmental justice says that we should start with the districts that are impacted the most and this city has not done that. And the environmental justice activists have not forced the issue either.

When it when it comes to air quality. Yes. When it comes to ocean quality, I think that we need to work with our neighbors in Mexico to make sure that any of the water that's coming over, that they can clean it on their side and we can clean it on our side when it pushes further in that they're getting cleaner water because we're cleaning it on both sides. I think that we also need to look at other mechanisms to clean the ocean as well, putting more seaweed and kelp in the ocean, which actually takes in toxins. We need to do things that are natural to the ocean so that we're not damaging the ocean. We're getting ready to potentially build on water, and that's going to damage the ecosystems there with the convention center. And so people aren't really thinking about that. This city really talks a good game about environmental and caring about environments. But then they do things that are damaging to it.