San Diegans will choose a new mayor on Tuesday, November 3. Hear what the candidates had to say about immigration. 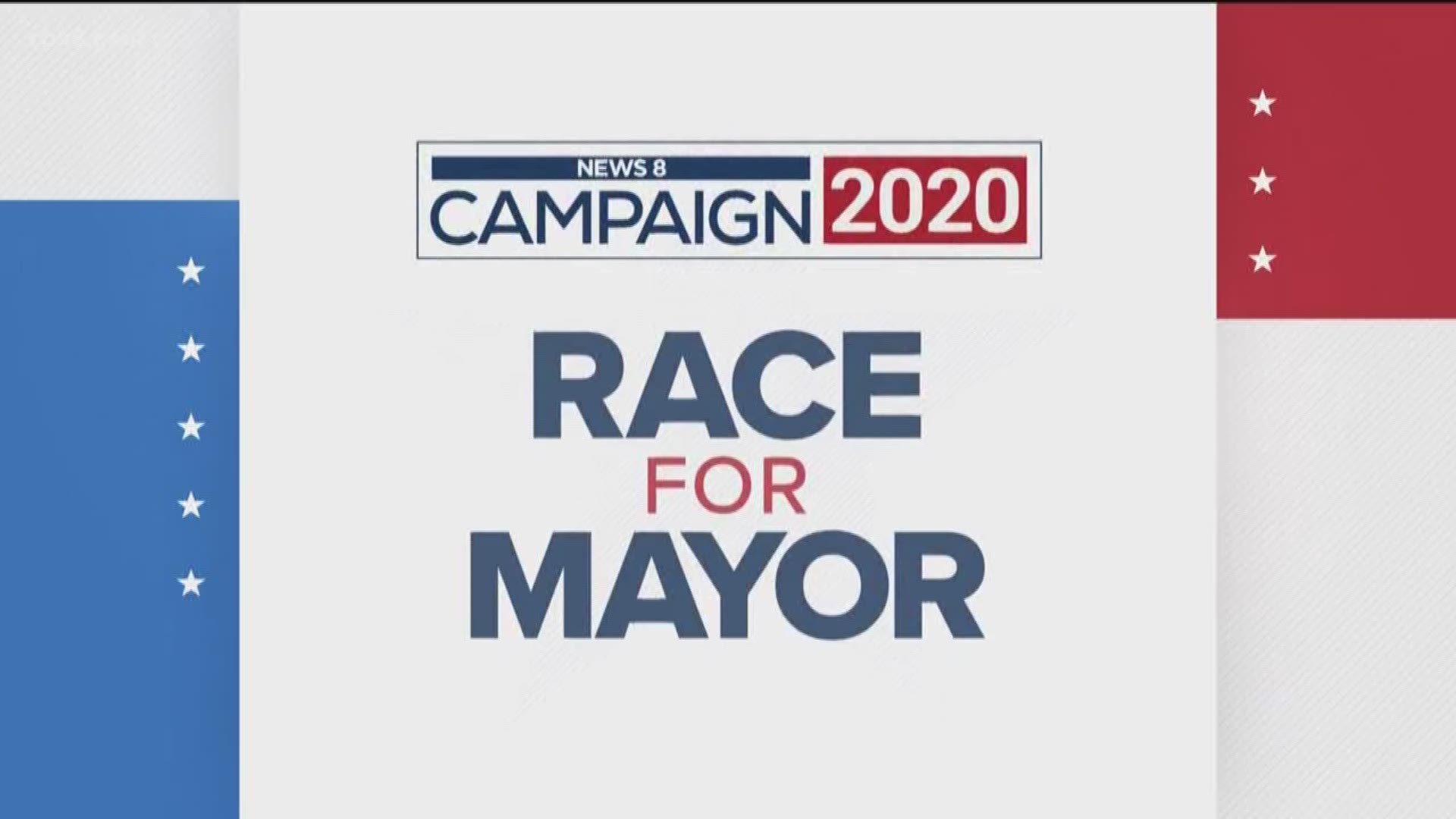 SAN DIEGO COUNTY, Calif. — How will mayoral candidates deal with the differences and the particular needs of San Diegans when it comes to the White House’s policies on immigration and the border?

We are truly a bi-national city, Barbara. Families live and work on both sides of the border. Commerce flows on both sides of the border. Our Chamber of Commerce is a bi-national chamber. When the chamber goes on trips, the mayors of Tijuana, Ensenada, and Rosarito usually go, and I want to continue to foster that relationship. It's very important to us economically and on so many personal levels.

You know, and so, so border control is very, very important to me. And I've spoken with some Latino lawyers, you know, regarding border control, and I'll be wanting to speak with a lot of others. So we have, I think, a good track on our immigration system. We just had to make it better, you know?

And what do you see working?

Is there anything that you have watched over the last couple of years, in particular in regards to immigration and what's been going on along our border that you would change?

Well, I do not support President Trump. I think what he is doing is very detrimental, not just to our regional economy as one that is on the border and dependent on our binational mega region, but also eroding the morality of our community and harming families in San Diego. Many of our city's residents live bi-national lifestyles. They live on both sides of the border. They may live on one side, work on the other. Their children may go back across frequently. I think that the mayor has done a decent job of really illustrating the economic benefits of our border, but hasn't spoken out about really the policies that we're seeing out of Washington, D.C. from the Trump administration that again, that are harming our community.

The mayor of San Diego is the mayor of the largest border city in the United States. And again, that's a bully pulpit from which to speak. And we should be speaking about this not just in economic terms, although that's really important. And really speaking about the fact that the border is an asset, not a liability, but also using this bully pulpit to make very, very clear that putting children in cages is not appropriate. That is absolutely wrong. That focusing on a border wall that we don't believe is going to be helpful is harmful, particularly when we're dealing with cross-border sewage, which is actually a much more direct threat to our community.

And every nickel that's going to a wall that's not useful is money that could be going to make sure that we have clean water and open beaches here in San Diego County. So I see a lot of need for activism at this level to really speak out and speak the truth to the administration that is so wrong-headed on the border. And I think they're wrong-headed in, not just for whatever reasons most people describe, but we know the border. You and I live here. We're just down the road. You and I understand how this works. I don't think people in Washington understand that. The mayor of San Diego has an obligation to make sure more people understand why the border is important, again, not just for our economy, but for the lives of thousands of San Diego that live binational lifestyles.

Let's talk about a problem that San Diego and for that matter, Kevin Faulconer has failed to address in his entire eight years of being our mayor. The nice way to call it is the poop problem. And the poop problem is that if you live in San Ysidro, you have to deal with air quality, that is a direct result when the dry. When it gets dried up, the poop dries up. It's in the air. We have Border Patrol officers who are now getting sick, physically ill because of the air quality down there.

The second thing we have to do, of course, we know is that we have sewage problems. So, of course, we have to deal with an international problem. And it's not just San Ysidro. We have to deal with the Imperial Beach, National City, the Mexican government, Tijuana. This is an international problem. And but before we do even that, we have to put a public health facility. Now, the county has got lots of money and the city has failed that there's not a public agency down there, a health agency.

In San Ysidro right now, monitoring the quality of water or for that matter, the quality of air down there. So we need before we start dealing with all of this stuff in the White House, we need to deal it at home in Santa Ysidro. Now, I was on the San Ysidro Chamber of Commerce back in the 80s. And this problem was it was right up there with the border with the wall. We campaigned to put in that fence and we did it so that we could have community safe from people coming across the border.

People, poor people coming across the border were trashing the neighbors in the neighborhoods and everything else. But I'm digressing. The real problem is let's solve the problem for San Ysidro. Then we'll worry about the White House and everybody else.

But can you solve the pollution problem without getting assistance from the White House? Something that big, especially you talked about the cross border stuff. Oh, we've got you have to have a teammate in the White House for that, don't you?

I do. And I think that I would probably be a better teammate than any of the other candidates running for the simple reason that I am not going to be a career politician. I'm not looking to become senator, governor or whatever. So I am. I have the concerns of San Diego. And I think one of the important things is that I would have more factual data having real-world experience out in the world in San Ysidro as opposed to the people that are currently running who are just politicians running for another job.

I would do what's required by law. No more. No less. Our police aren't supposed to be enforcing immigration laws and federal laws. What we're required to do, provide security for demonstrations and those types of things. That's what we need to do. But we don't need to get involved in the federal political turmoil that's going on. I mean, quite frankly, I got involved in politics seven years ago, city politics, because it's a nonpartisan office. It's supposed to be running the nuts and bolts of the city and making sure it operates efficiently and gives the taxpayer a good bang for their taxpayer buck. That comes down to the city and quit getting involved in all the national and state politics. It's dividing us so much.

When it comes down to civic politics, some cities have taken a stance where they wanted to come what's known as a sanctuary city. How do you feel about that?

Sanctuary cities, I think, can lead to different problems with attraction of other people to come here and those types of things. We do what the law tells us to do, and that's it. That's our responsibility when it comes to immigration.

Well, this is a very complicated situation right now. As you know, we're having so many kids that are being held at the border. And it's very they're having very inhumane situations. The ACLU is working on some issues with that right now. I personally feel immigrants have a right. They can come in legally. We can process them. We can treat them with dignity. America has been a place of opportunities for people. San Diego is a border town. So let's do things the legal way, the proper way to treat people with dignity.

You know, these these these children that are being locked up and treated as criminals because they came to escape, you know, the drug cartel in San Salvador, you know, Central America, these are people that are escaping for a better life. These are not criminals. These are families, mums and dads and children that have to come through this way while being killed and then to be treated as criminals here at our border. Myself, I'm an immigrant. I came here on a green card and I have that story where it takes a lot of hard work in America and you can succeed. And these people are coming for a better life.

So it's the human aspect that is the most important to you it sounds like.

Absolutely. I'm a medical provider and I love to take care of people.

Yeah. You know, Trump discourse is not the enemy. I think that we've sat down and after you've seen me sit down with many people who didn't agree with the things that we agreed with, being that this would be a city that I'm running. I would sit down with the president of the United States and talk to him and help him to understand or not understand. You know, we we may walk away on different, different eyes, but let him know that we have to be, you know, as he says, Christians. And in doing that, that means that we take care of one another, that we support one another, that we love one another, that we take in our neighbors and that we feed and clothe them. And so that is not something that I've heard this president talk about.

I've not even heard him quote the Bible when he speaks. And so I would just push back on Christians in the United States, in San Diego, who backed this president and say that he is not backing the teachings of Jesus Christ and Christianity. And so we should push back and I would push back and I will run this city to make sure that we are reflective of love and neighbors and kindness because we are all brothers and sisters here and we must all take care of one another.