More than a half a century in the making, James Marino, 81, earns his bachelor's degree in film. 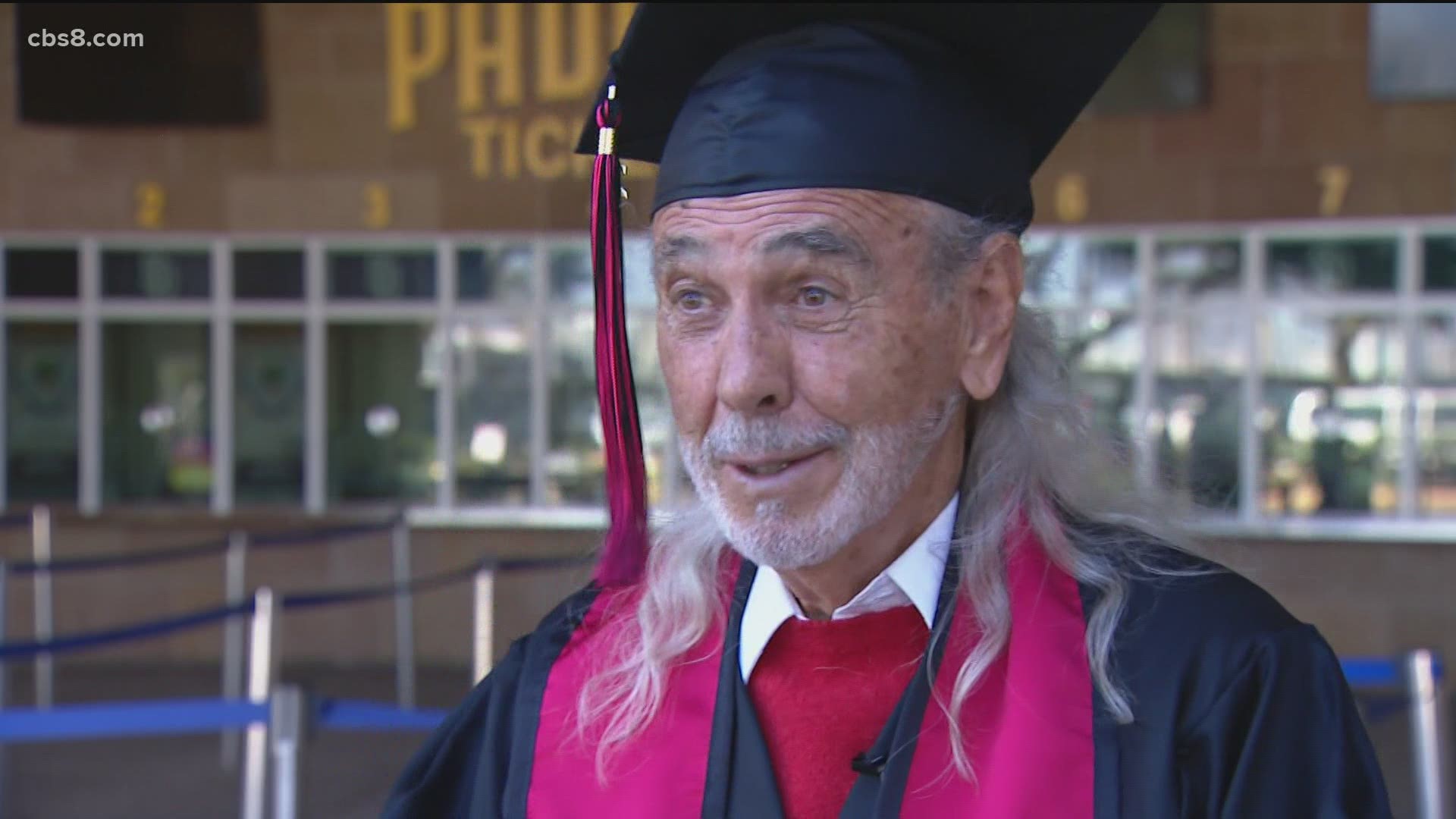 SAN DIEGO — San Diego State has a special graduate this year, one who has waited more than a half a century to earn his college degree.

James Marino, 81, earned his Bachelor of Science Degree in Applied Arts and Sciences with a major in Television, Film, New Media Critical Studies from SDSU on Thursday.

Although he spent his career in video production he always wanted his college diploma.

“It was difficult at times, time consuming but in retrospect I did it, I'm surprised more than anyone else,” said Marino.

His first stint at San Diego State started in 1958 when he was a professional drummer with the band “The Strangers.”

“The first time I dropped out because I was in a rock and roll band and had a hit record and went on tour,” said Marino.

When he met his wife in the early 1960’s he went to San Diego City College, dropped out, went back to SDSU in 1964 and dropped out again. He needed to support his growing family so he started his own company Frontline Film and Video Production, hence the video camera in his hand in all the pictures of his children’s college milestones.

“Watching the big screen at Petco park, this 81-year-old man cruising across the stage, it's just awesome,” said Merrick Marino.

His son, Merrick, was a first-generation college graduate, graduating with a master's at the University of Southern California. Ironically his father inspired him to write, College Undercover: What every student needs to know.

“People like him represent something in all of us, that we can achieve whatever we set our mind to at whatever age,” said Merrick.

James has four children, one daughter and a granddaughter who also graduated from SDSU. After years in the production business, he decided to go back to college.

In 2018, at age 78, James re-enrolled at SDSU and hoped as a college graduate he could get a good-paying job.

“You don't know of any good-paying jobs for a graduate do you? That's 81 years old. If you do call me,” said Marino.

Majoring in Television, Film and News Media, James knew a thing or two about the craft but says he never boasted about it in class. He found it difficult at times, especially with the computer stuff and Zoom.

“Even though I had doubts when I was doing it, I just kept going,” said Marino.

James is a reminder that timing for everybody in their life journey is different and this time it was his time to graduate, even at age 81.

“There is still a lot to learn. I'm not done, now it's the college of life,” said Marino.

James says he dedicated his diploma to his father. His parents immigrated from Sicily and grew up poor in Little Italy. He says his father did not know how to read or write but was the smartest man he ever knew.

“Working with James has been a gift, especially during the pandemic. As a Graduation Advisor in the Office of Advising and Evaluations at SDSU, I've worked with thousands of students over the years. I'm a first-generation college graduate, so while I take each degree confirmation personally, we don't always get the chance to connect with our students on such a personal level. James keeps calling me his degree angel, but he's been my angel as well. Always checking on me, asking how my husband and our new daughter were doing, really taking an interest. While I was part of the team that helped guide James on his journey, it was James that did the real work needed to earn his degree. I know it's been a privilege for all us who have worked with James here at SDSU, “said Heather Foster, who served as Marino’s graduation advisor.

You are never too old to keep dreaming! Check out 81-year-old James Marino. He walked across the stage and earned a...