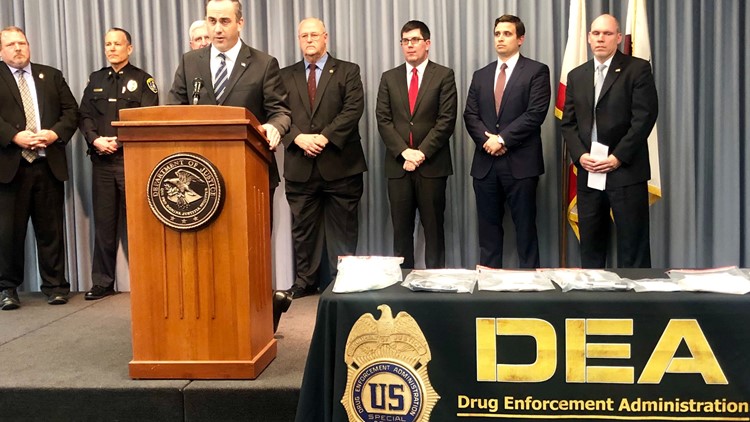 Investigators executed over a dozen search warrants and seized nearly four pounds of methamphetamine and two firearms. Authorities also took into custody 47 of the 85 defendants, which are in federal or state custody.

Authorities are still searching for 38 individuals.

“Today we sent a message to drug traffickers in our community. If you sell drugs in San Diego, we will find you and prosecute you to the full extent of the law,” said U.S. Attorney Robert Brewer.

According to court documents, the year-long investigation that was led by the Drug Enforcement Administration and the Internal Revenue Service, targeted multiple San Diego-based drug distribution and money laundering networks.

According to the investigation, not only were tens of thousands of dollars in proceeds laundered but were also sent back to the Sinaloa Cartel in Mexico. During the investigation, agents also coordinated seizures of narcotics and drug proceeds throughout San Diego County and across the United States.

Court documents show the defendants utilized various encrypted communication services like Signal and WhatsApp to communicate among themselves to avoid detection by authorities, but despite their sophisticated efforts, law enforcement penetrated this network with a variety of investigative techniques, including physical surveillance, obtaining phone records, financial documents, tracking warrants on telephones and vehicles, and undercover agents.

In conjunction with the wiretaps, agents ultimately seized approximately 175 pounds of methamphetamine, heroin, and fentanyl tied to these networks, approximately $50,000 in cash, multiple firearms, and a 2020 Cadillac Escalade (valued at over $115,000).

“Multiple defendants are charged with conspiracy to commit money laundering violations, a charge which carries a statutory maximum sentence of 20-years imprisonment. These are serious crimes that come with serious time, said Agent Smith.

Many of the defendants are scheduled to be arraigned in court Friday. If found guilty, some defendants could face 20-year sentences.