One demonstrator, who was sitting on a cruiser while its windows were being shattered, was injured by falling onto the ground when the cruiser sped off. 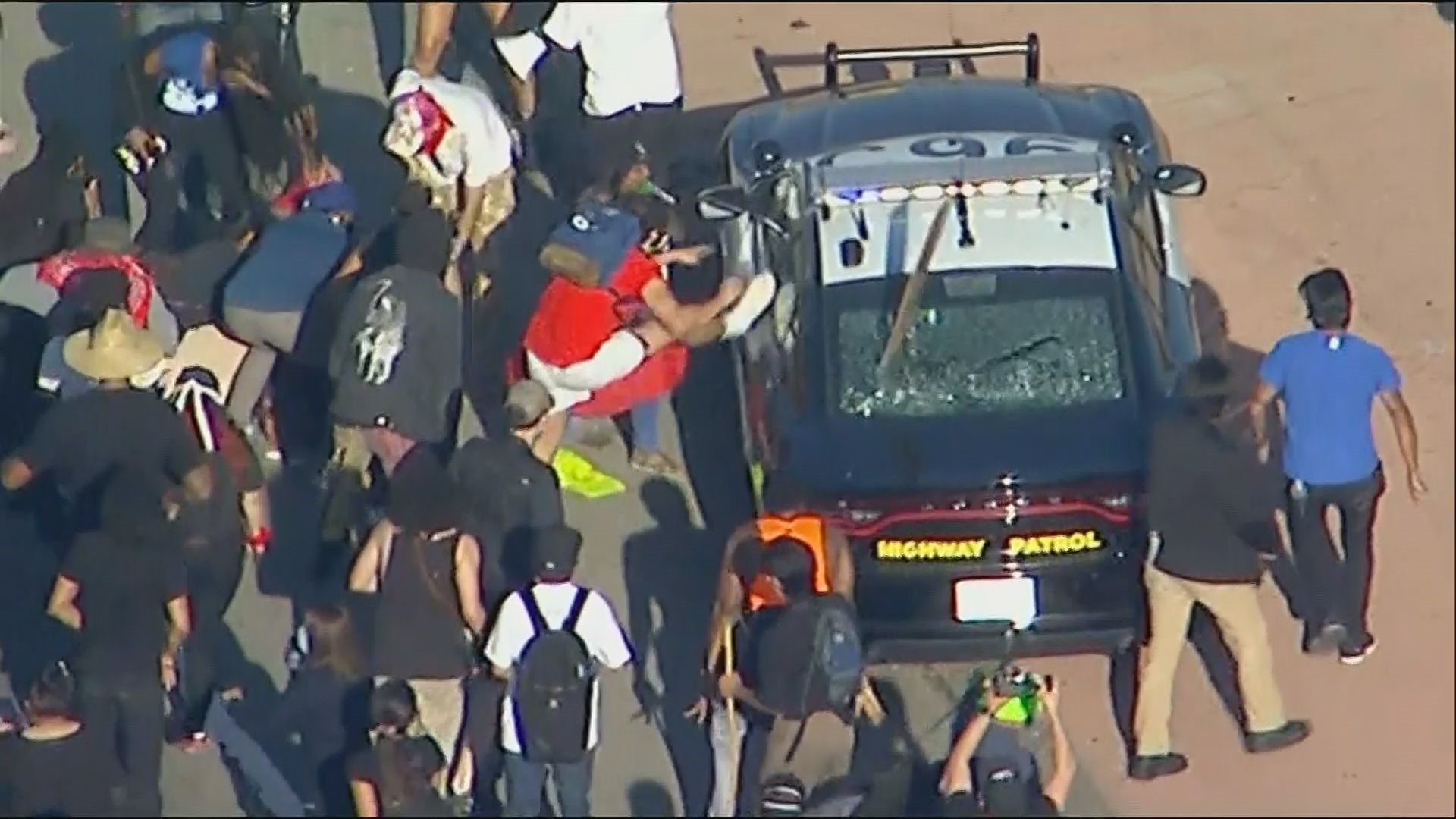 The mostly peaceful protest, which started about 4 p.m. outside the Hall of Justice turned violent about 6 p.m., when hundreds of protesters entered the Hollywood (101) Freeway, near Alameda Street in downtown Los Angeles, and some demonstrators shattered the windows of two CHP cruisers.

One demonstrator, who was sitting on a cruiser while its windows were being shattered, was injured by falling onto the ground when the cruiser sped off to avoid further damage. Personnel with the Los Angeles Fire Department responded to take the victim to a hospital.

"We hear your anger and your pain. We will always facilitate freedom of speech. Period," the Los Angeles Police Department said in a statement on Twitter. "All we ask is that protests are held in a safe and legal manner."

The protest was organized by Black Lives Matter's Los Angeles chapter to demand justice for Floyd, who was killed Monday at the hands of Minneapolis police officers, and to demand that all officers who use excessive force be prosecuted.

"We quickly pulled together a Los Angeles-based protest in honor of George Floyd, who was murdered by police in Minneapolis," Black Lives Matter organizer Melina Abdullah told Fox 11. "We had a couple thousand folks out."

Los Angeles Police Department Chief Michel Moore said "the actions I watched in the video were incredibly disturbing and go against the basic law enforcement principle of preservation of life," regarding the video of a Minneapolis police officer kneeling on Floyd's neck.

"Knowing that we have experienced our own high-profile incidents here in Los Angeles, I can assure you the LAPD strives each day to build trust and these events are sobering reminders of how quickly that can be lost."

President Donald Trump tweeted, "At my request, the FBI and the Department of Justice are already well into an investigation as to the very sad and tragic death in Minnesota of George Floyd....

"....I have asked for this investigation to be expedited and greatly appreciate all of the work done by local law enforcement. My heart goes out to George's family and friends. Justice will be served!"

Black Lives Matter is seeking prosecution of police officers "when they kill our people" and a reduction of funding for police, Abdullah said.

"We don't need to be spending more than 50% of our city's taxpayer dollars on police," Abdullah said. "Those are the two things that people are calling for in Minneapolis and we echo that sentiment here in Los Angeles."

Black Lives Matter's Los Angeles chapter reminded followers on Twitter of those who were killed in recent years by police in Los Angeles County.

About 6:30 p.m., hundreds of protesters left the freeway and continued the protest near Alameda Street and Aliso Street. It was not immediately clear if anyone was arrested.

Protesters demonstrated into the evening and congregated about 9 p.m. outside the Los Angeles Police Department headquarters, which someone tagged with graffiti that read "1312 ACAB," a common acronym and its numeric code for "All Cops Are Bastards."

Some protesters were also recorded burning an upside down American flag, but the exact location was not clear.

"Peaceful demonstrations are a hallmark of our country. Violence is unwarranted and takes away from the message," Los Angeles County Sheriff Alex Villanueva said in a statement released on Twitter.

"I urge all of us to protest peacefully for the sake of everyone's public safety." 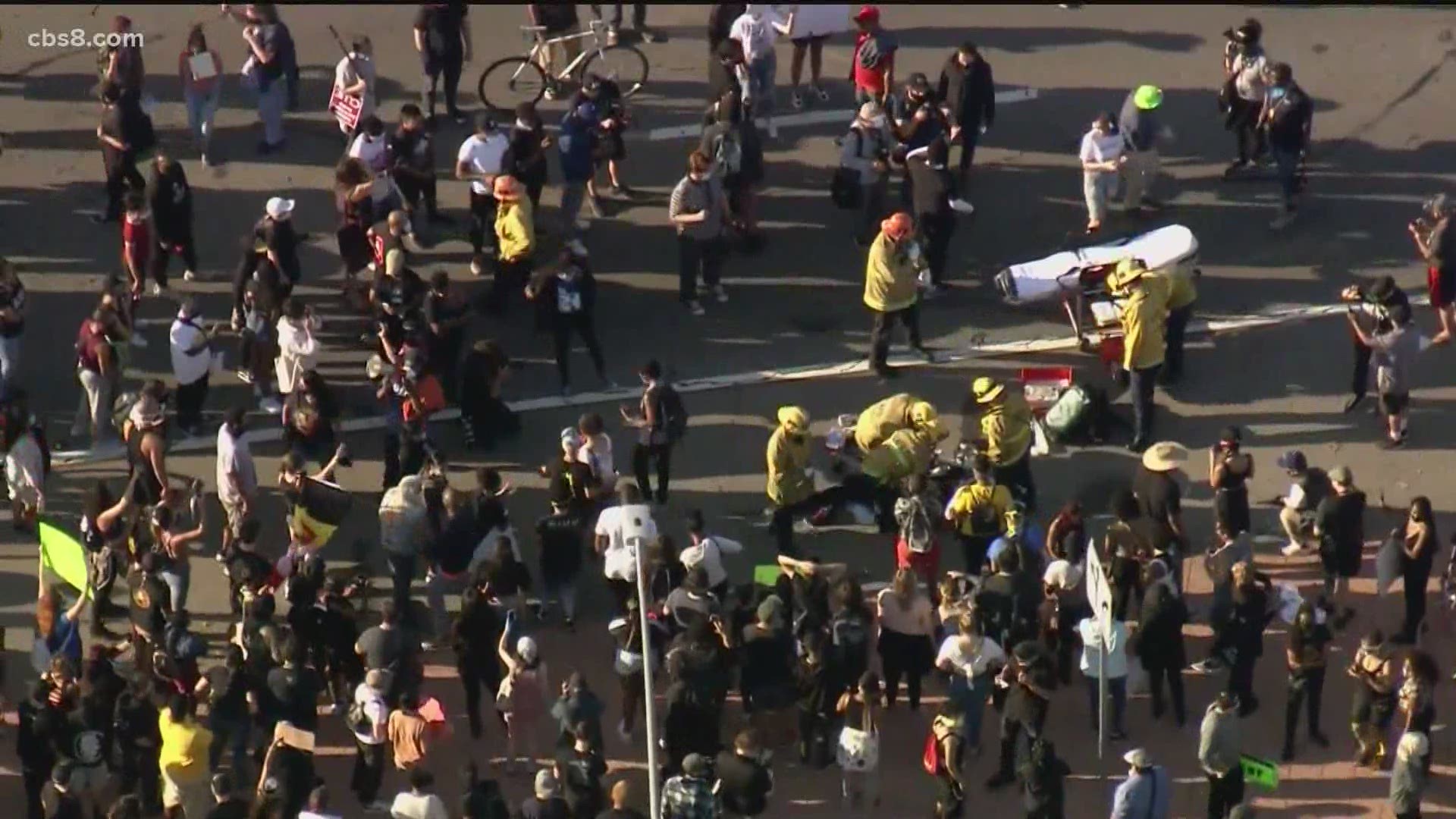