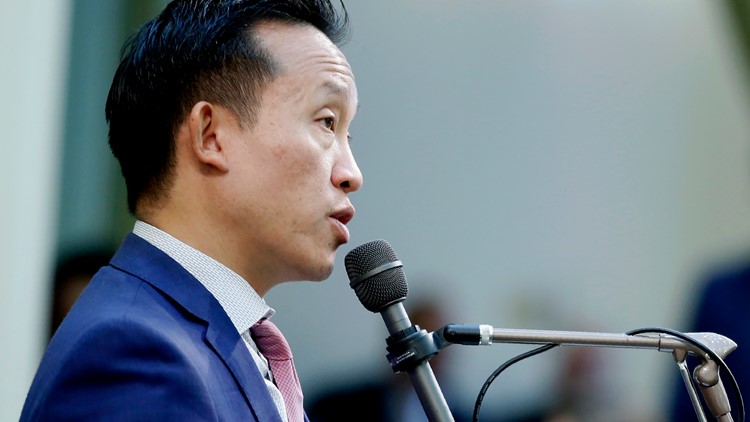 Photo by: AP
Assemblyman David Chiu, D-San Francisco, calls on lawmakers to approve his measure requiring school districts to update their records to reflect the chosen names and genders of graduates, during the Assembly session at the Capitol in Sacramento, Calif., Thursday, Aug. 15, 2019. The Assembly approved Chiu's measure and sent it to the governor. (AP Photo/Rich Pedroncelli)

SACRAMENTO, Calif. (AP) — California school districts would be required to update their records to reflect the names and genders of graduates who have changed them since getting their diplomas under a bill approved by state lawmakers on Thursday.

The measure they sent to Gov. Gavin Newsom is intended to particularly help transgender graduates or those who identify themselves as having no gender, said Democratic Assemblyman David Chiu of San Francisco.

Those graduates already often face discrimination and their efforts to find jobs can be affected if their student records don't reflect their legal name, he said. Old records can also inadvertently reveal that a graduate is transgender when they have not otherwise made the transition public.

California law protects current transgender students from discrimination, but Chiu said some schools have been reluctant to issue new diplomas to graduates who have transitioned or come out as transgender or nonbinary after leaving school.

His bill requires school districts to update those former students' diplomas, GEDs or transcripts upon request. That would include changing all references to the graduate's previous name or gender.

"While this is a real problem that can negatively impact transgender and nonbinary Californians when applying for jobs or school, the overall cost of implementing this bill will be relatively minor," Chiu said in a statement.

There was no formal opposition to the bill, including from school organizations.

The bill passed both the Senate and Assembly with no negative votes, though Republican lawmakers withheld their votes.