The State hasn't approved the decision although the San Diego County Health Dept. has ok'd the move. 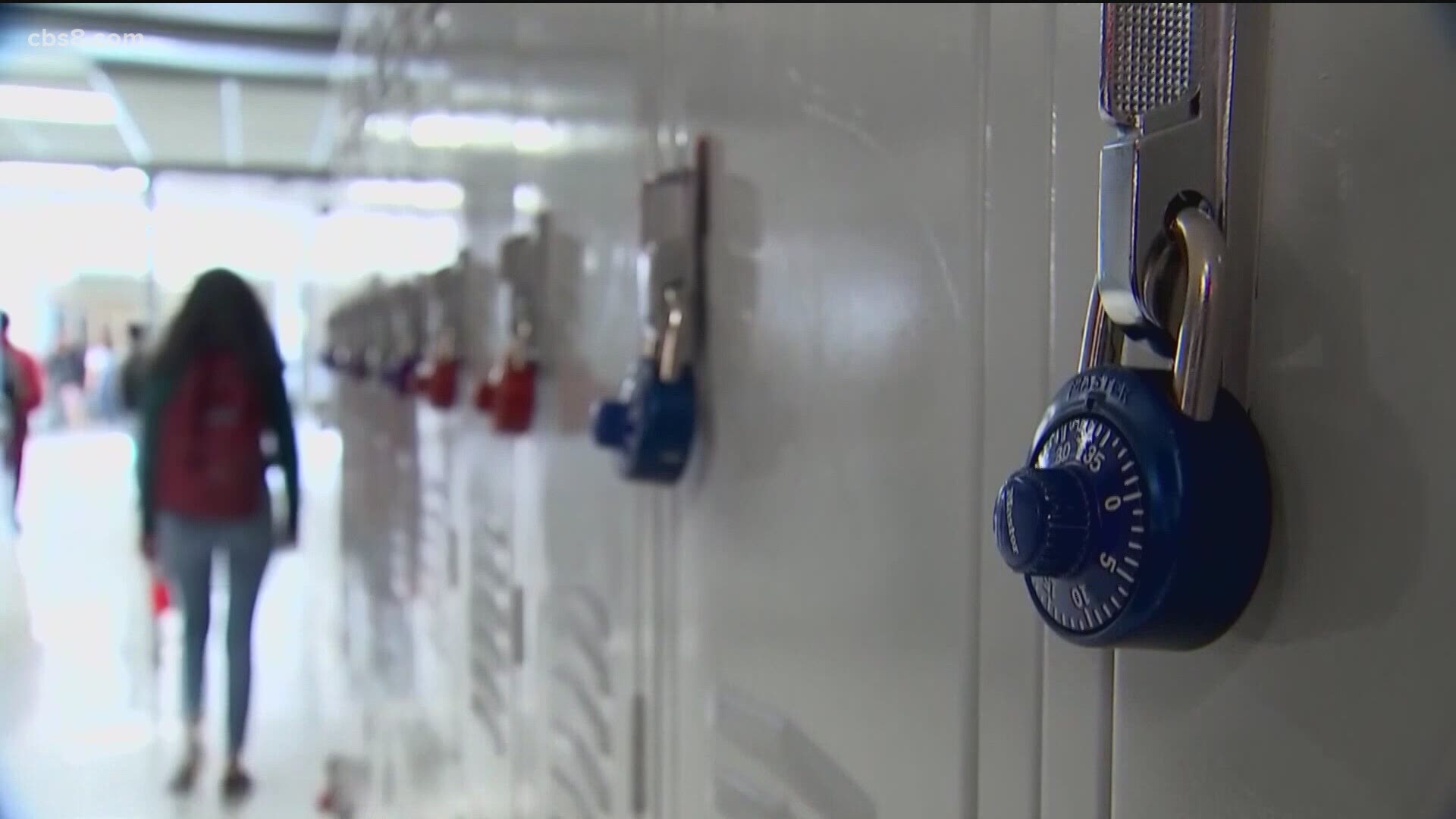 SAN DIEGO COUNTY, Calif. — The state has denied requests from San Dieguito Union, Poway Unified and Carlsbad Unified to expand in-person learning. Now, school officials from those districts involved are trying to figure out what's next.

San Dieguito Union High School District says it plans to bring more students back on campus Monday despite that decision not being officially approved by the State. It says a limited number of students have been on campus since last fall.

News 8 spoke with San Dieguito Union High School District Superintendent Robert Haley Monday morning. He said the time to get kids back in school is now.

“Everybody’s saying, ‘well okay when we get to the red tier then we’ll be able to expand our reopening,’ I hope that’s the case, but I’m not going to stop trying to get it done before the red tier. I don’t think just waiting for that is good enough for our students,” Haley said.

Governor Newsom laid out a plan last week to spend $2 billion in grant money with schools that safely reopen by April 1.

“Here we are with a plan, ready to move forward, and we can’t get that team to respond to us,” said Haley.

Some students have been attending in-person learning in San Dieguito Union High School District since September. The Superintendent says now they’re ready to expand the number of students they have on campus, but they haven’t gotten the green light from the State.

“All we received back was a paragraph that said ‘Yes we have your request. We have a lot of requests and we have until the close of March 9 to consider your request.’ I was disappointed in that. I don’t think it acknowledged the sense of urgency that there is to get schools more open and to serve our students,” Haley said.

Superintendent Haley says their new plan to get more students back in school has already been approved by San Diego County’s Health Dept. The San Dieguito school district set a date to expand in-person learning for March 8 and Haley says they plan to stick to it.

“If you were scheduled to come to school on Monday, we want you to come to school. We have contingency plans. You’re going to be welcomed. We will have places for you to learn,” Haley said.

Haley also says he’s not worried about being penalized by the State for welcoming more students back on Monday. He says students say they’re ready and so is the district.

“As soon as we can fully implement our plan, we will, but I really want all of those students to come to school tomorrow. We will keep them safe and we will make it worthwhile,” Haley said.

Haley says San Dieguito Union is still offering remote learning for students who want to stay home but his focus is on getting as many students as he can back in class.

"This evening, we were informed by Governor Newsom's representative, Dr. Naomi Bardach, Lead of the Safe Schools for All Team for the State of California that our application to expand in-person teaching and learning for students was not approved.

We are incredibly frustrated and angered by this arbitrary and uninformed decision, as the application had the full support of the San Diego County Public Health Officer, Dr. Wilma Wooten, and her team, after a thorough review.

This evening I spoke directly with Dr. Naomi Bardach, head of the CDPH Safe Schools for All Team, and Brooks Allen of the State Board of Education to appeal the decision. Dr. Bardach was unwilling to change the ruling and said it was final.

We want everyone to know we stand by our decision to have those students who were assigned to come to school tomorrow to do so. We are reviewing our options and will have an update for families and staff during the day on Monday."

Late this evening, we were informed by Governor Newsom's representative, Dr. Naomi Bardach, Lead of the Safe Schools for All Team for the State of California that our application to expand in-person teaching and learning for middle and high school students was not approved by the CDPH. We are incredibly frustrated by this arbitrary decision, as the application had the full support of the San Diego County Public Health Officer, Dr. Wilma Wooten, and her team, after a thorough review.

This evening I spoke directly with Dr. Bardach to appeal the decision. Dr. Bardach was unwilling to change the ruling and said it was final. She stated that her approval of our application was contingent upon each cohort of students remaining in one classroom with a single teacher for the entire day. This is not possible for our secondary students, as they all have multiple teachers, courses, and schedules. Other North County school districts also submitted appeals to reopen. Their applications were also denied tonight based on this unrealistic condition not being met.

Our plan is to still be able to reopen during the week of March 15. If San Diego County continues its downward trend in case rates, it is projected that our County will be in the red tier by March 16. That would allow us to reopen middle and high schools starting March 17. The County moving into the red tier would allow us to move forward with reopening our middle and high regardless of the CDPH's decision.

Our District, schools, and staff have worked tirelessly to establish safe reopening plans that adhere to all local and State requirements (COVID-19 School Safety Plan, CDPH checklist, Reopening Guidebook, etc.). We've established effective contact tracing and quarantining processes. We've added filtration devices and upgraded ventilation systems in all of our classrooms and schools. We've implemented enhanced cleaning and disinfecting protocols. We've implemented physical distancing and mask requirements. And we have successfully advocated for the prioritization of vaccinations for our staff.

We are committed to ensuring that we are able to welcome our middle and high school students back during the week of March 15. We are confident our reopening plan is comprehensive and addresses all conditions and protocols as required by public health officials. We apologize for the late email, but we wanted you to hear the news as soon as we were made aware. We will continue to keep you informed as we push forward with the reopening of our middle and high schools for our students."

"This evening, we were informed by the California Department of Public Health (CDPH) that our application to resume in-person teaching and learning for our middle school and high school students was not approved.

This evening I spoke directly with Dr. Naomi Bardach, head of the CDPH Safe Schools for All Team, to appeal the decision. She was unwilling to change the ruling.

We are reviewing our options and will have an update for families and staff on Monday."