California farmers grind their way into the coffee industry

Southern California farmers push their lands to the limit, looking to reimagine the typical cup of coffee. 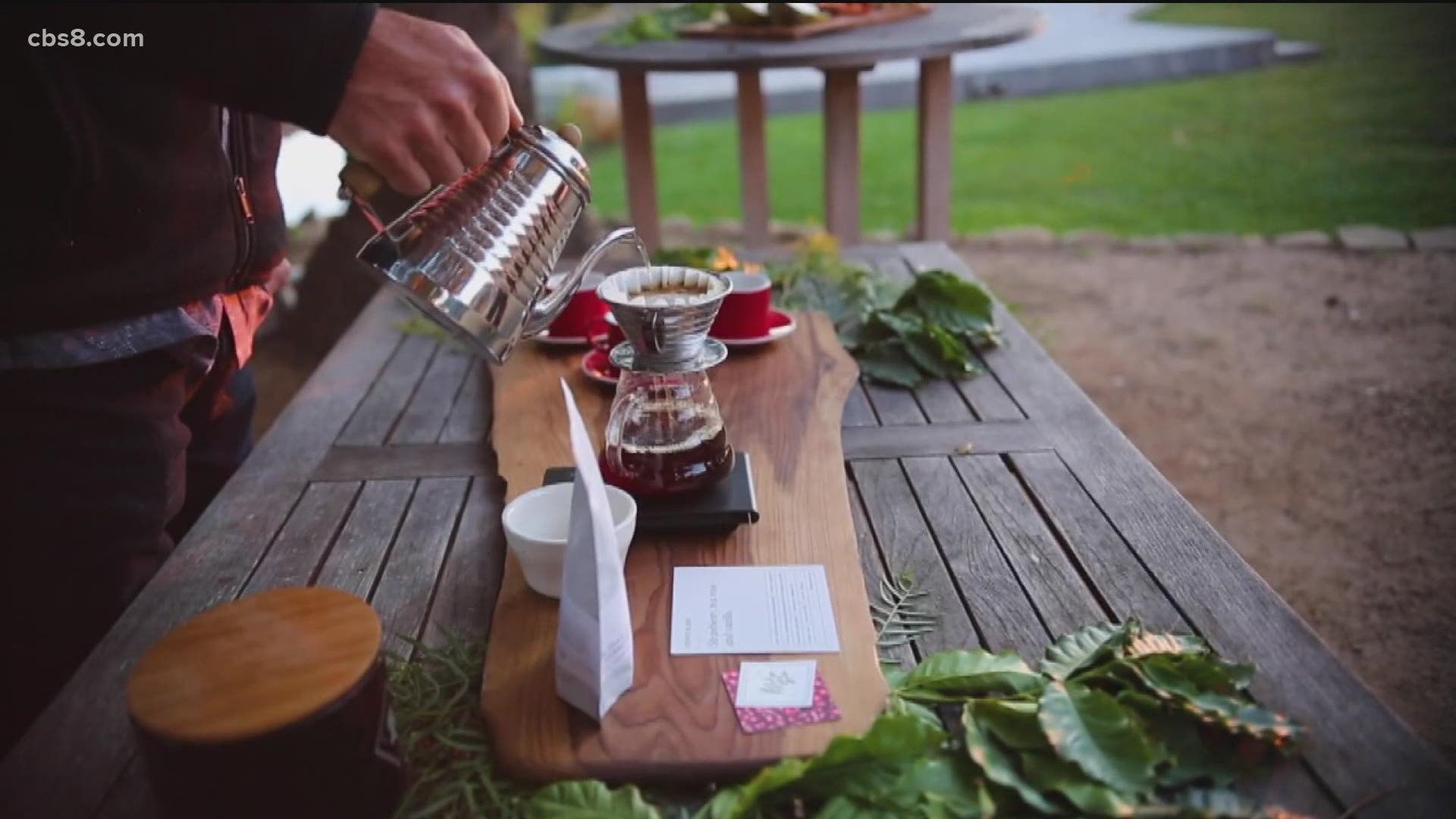 SAN DIEGO — In the mornings, it’s a necessity. That hot kick of coffee beans brewed with boiling water is how many of us start our days. It’s the most popular beverage in the United States, and why shouldn’t it be?

It boosts your energy, improves concentration and there’s even studies that it can improve your overall health. Nearly 62% of Americans drink a cup a day and that number is on the rise. It’s a billion-dollar industry, but in the countries that most enjoy a fresh brew, they can’t grow the delicious beans used in the process.

Traditionally, the plants within a zone around the equator are known as the coffee belt. Brazil, Vietnam, Colombia, Indonesia and Ethiopia are the worldwide leaders in coffee production.  The only place that coffee is grown commercially in the United States is Hawaii.

But farmers in Southern California, say, ‘Why not us?’

“Coffee is now being grown farther from the equator, it wasn’t originally believed it would grow here.” said Chris Bailey, the farm manager of Pardee Farms in Valley Center.

Until recently, the farm only grew staple California crops: oranges, lemons and avocados. It wasn’t until Chris’s uncle, Jim Pardee, sought a way to maximize space and profit for his farm. But Southern California is well outside the coffee belt, so how challenging is it to grow those little trees so close to home?

Growing on the Fringe: Coffee in California. Tonight @CBS8 pic.twitter.com/C59x5fDyWn

While growing the plants in California is a challenge on its own, it’s just the first step in the process. That’s where Jay Ruskey, the founder of Frinj Coffee comes in. The Goleta based company works with 65 farms throughout southern California. Once harvested, the beans are shipped back up to Goleta to be roasted and packaged for shipping.

“There’s this new specialty market where farmers around the world are now taking the time to harvest red, ripe cherries and processing those with care instead of just bulk processing.” sad Ruskey.

The coffee I tried was undeniably good and had a much different taste than most I’ve tried. But even though the beans are coming locally, the price between coffee coming from Brazil versus San Diego is shockingly high. The price for a 5-ounce bag of beans from Carlsbad will run you $75.00. Ruskey says it comes down to the price of labor.

“With French coffee, 60% of that value goes back to the farmer, which in comparison to the rest of the world, it’s under 3%,” said Ruskey. “It takes a lot of energy for a farmer to plant the seeds, wait four or five years to get a crop, and then all the investment in the capital to process it.”

While Frinj coffee sells directly to the customer through their website, Ruskey sees the future of coffee much like how the beer industry is now. Imagine going to a coffee house and getting a flight of java from around the world.

“Really understand more like craft beer, what it takes behind the scenes to get to quality coffee.” said Ruskey “We enjoy coffee daily. I don’t think most of us know what’s behind it.”

Behind the beans, it’s local, hard-working farmers like Chris Pardee, pushing the limits on what can be grown on his land.