Newsom, lawmakers unveil plan to push some schools to reopen by April 1

The decisions to reopen, however, still rest with school officials and labor unions. Newsom hopes the funding bill will prod them into holding in-person classes. 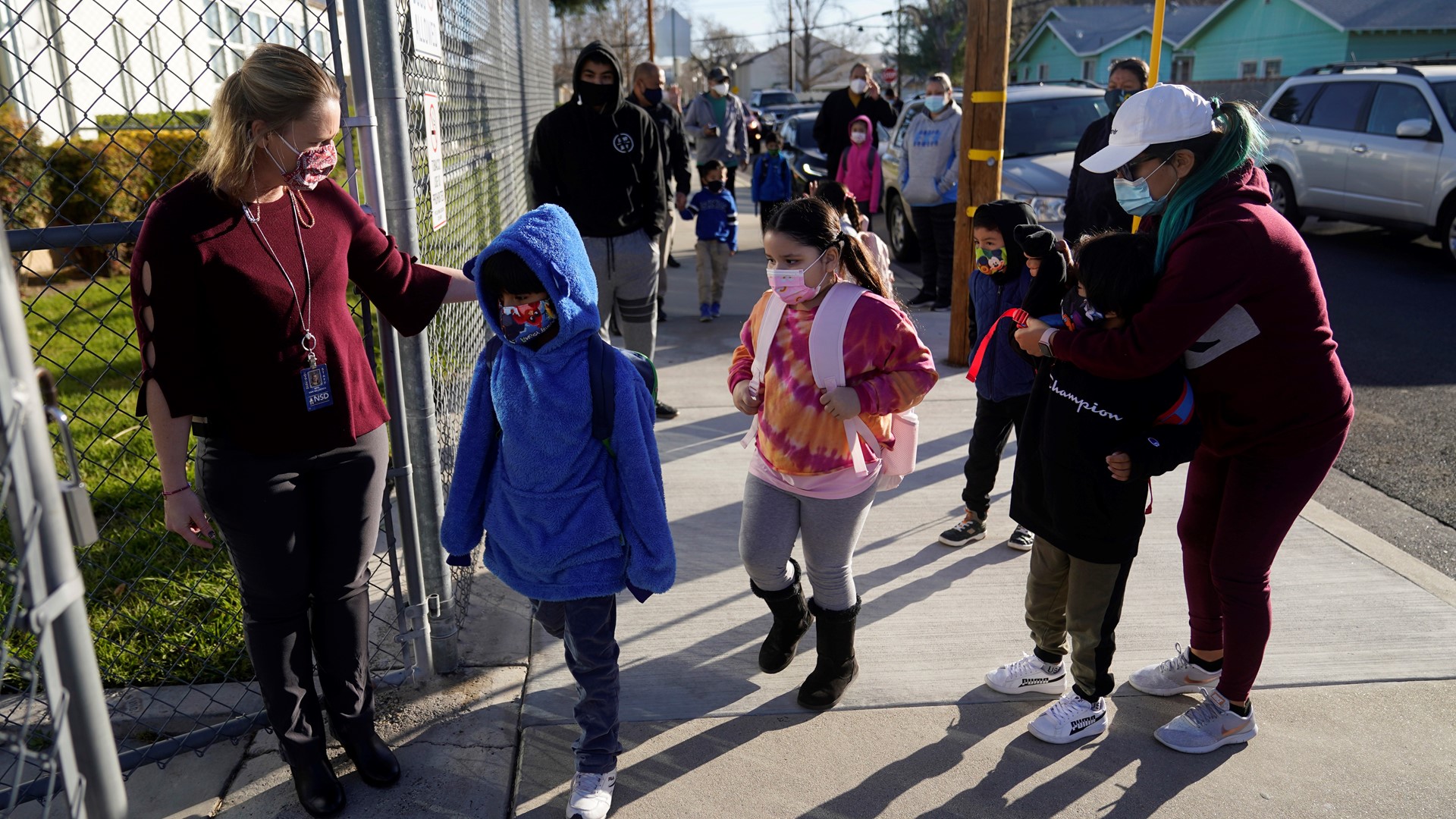 CALIFORNIA, USA — This story was originally published by CalMatters.

California public schools will receive financial incentives to reopen campuses by April 1 for their youngest and most vulnerable students under a deal Gov. Gavin Newsom and legislative leaders announced today after months of tense negotiations.

Under the plan, schools are not required to reopen. Decisions still rest with school boards, administrators and labor unions, so it is unclear whether the deal will actually result in widespread campus reopenings.

Prompted by parents who have been protesting school closures, Newsom and Democrats who control the Legislature said they hope that the $6.6 billion compromise will prod public schools to reopen after most campuses have been closed for nearly a year.

Legislators said they will vote on the plan Thursday, and Newsom said he would quickly sign it into law.

“We expect that all of our (transitional kindergarten) to (grade) two classrooms will open, and then the next month, we want to see more happen beyond that,” Newsom said during a press conference at an elementary school in Elk Grove. “We’re now accelerating the pace of reopening.”

But parent activists blasted the plan, saying they fear it will not compel enough schools to reopen.

“This isn’t a breakthrough, it’s a failure,” said a statement from Pat Reilly, a parent advocate with the Open Schools California group who has children that attend Berkeley schools.

“Make no mistake, there will still be closed schools and kids left behind a month from now and months afterwards until the Governor, legislature or the courts force them open.”

As California nears the March 13 anniversary of its initial school closures, most of the state’s 6.1 million K-12 public school students remain in distance learning. California and other West Coast states have been among the nation’s most cautious states in returning students and teachers to classrooms.

Under the plan, schools that remain closed would have to explain their reasons why, and they would lose 1% of the grant funding they are slated to receive for every school day their campuses remain closed past April 1.

To get their share of the $2 billion in grant funding, school districts will have to do the following:

E. Toby Boyd, president of the California Teachers Association, said in a statement that the deal “gets us one step closer to rejoining our students for in-person teaching and learning.”

“We are reviewing the proposal’s details more closely, and we look forward to working with local educators as they negotiate with districts to safely reopen for in-person teaching and learning beginning in one month,” Boyd said.

The deal also includes $4.6 billion in discretionary funds for schools to address students’ learning loss this school year, by, for example, extending the school year or offering summer school.

Republican Kevin Faulconer, who is running against Newsom next year or if a recall qualifies for the ballot this year, criticized the plan, saying it doesn’t go far enough to get students back in classrooms.

“The partial reopening plan announced by Gavin Newsom today isn’t even close to good enough for our kids and teachers,” Faulconer said in a statement. “For him to tout this as an accomplishment after months of inexcusable failures shows how out of touch he is, and why he should be recalled.”

Among the key differences in the new compromise compared to previous proposals is clarification that teacher vaccines are not required for physically reopening schools. But it also would etch in state law Newsom’s pledge to set aside 10% of incoming vaccines for educators, which helped break the political logjam, said Democratic Assemblymember Phil Ting. This helped resolve some of the educators’ concerns.

“What really helped get the confidence of educators was the ability to get a certain amount of vaccine prioritization,” Ting said on a call with reporters.

Newsom and public-health experts say schools can physically reopen without vaccinating teachers so long as they use strict safety measures such as masking and distancing. But vaccines have been the key sticking point between school districts and teachers unions.

Although teachers were among the prioritized professions in the state’s broad Tier 1B Phase 1 group, a county-by-county rollout resulted in a haphazard picture for teacher vaccinations.

Newsom said all appointments on Thursday and Friday at California’s two FEMA-run mass vaccination sites in Oakland and Los Angeles will be reserved for teachers, school staff and childcare workers.

Also starting today, the state has set aside at least 10% of all vaccine doses for educators and childcare providers with the goal of giving 75,000 doses weekly to these essential workers, according to Darrel Ng, a spokesman for the California Department of Public Health. More than 50,000 doses are earmarked for Los Angeles County, where the Los Angeles Unified School District alone employs more than 26,000 teachers. San Diego County is expected to receive about 20,000, Ng wrote in an email.

Doses will be prioritized for teachers, childcare workers and school staff already working in person or about to return to schools and daycare centers, Ng noted.

County departments of education will give single-use priority codes to K-12 school districts that staff can use to find appointments on the state’s COVID-19 vaccination website, myturn.ca.gov.

Newsom would not comment today on whether the state will add the COVID-19 vaccine to the list of immunizations required for school or daycare. California is one of five states that allow only medical exemptions for school vaccinations, not personal or religious exemptions.

The bill also makes clear that districts that have already reopened campuses do not have to negotiate new agreements with their labor unions; they can essentially keep their existing plans in place.

As vaccine accessibility has increased for teachers in recent weeks, more large school districts, including Long Beach and Elk Grove, have set return dates for this month for some students. With roughly three months of school left on most district calendars, about three-fourths of the state’s 100 largest school districts remain in full-time distance learning, according to a CalMatters tally.

“We’re moving forward because of the relationships that we have with our labor partners,” Elk Grove superintendent Chris Hoffman said.

Though some school districts in the state have been open as early as last August, only about one-fourth of California elementary students are in districts offering hybrid or in-person instruction. About 85% of the state’s high school students remain in distance learning.

Credit: Photo by Anne Wernikoff, CalMatters
Third-grader Macauley Davis, 9, center holds up a sign during a rally to reopen schools at Astro Park in Oakland on Feb. 28, 2021. Macauley said compared to zoom classes it would be, “way more easier to be in school, even with masks.”

The counterproposal by Democratic legislators calling for an April 15 return aligned most closely with teachers unions’ stances by effectively tying reopenings to vaccinations — a requirement that led Newsom to suggest he would veto the bill after arguing it would slow down school reopenings.

Under the new plan, schools that reopen in the purple tier must follow the state health department’s testing guidelines, which call for testing teachers and students weekly or biweekly, depending on local case rates. Districts that adopt safety plans before April 1, however, are exempt from the state’s testing guidance.

Jeff Freitas, president of the California Federation of Teachers, stressed that “robust testing is essential to safe in-person education.”

“We had hoped to see more robust state level enforcement in this plan to ensure that all districts take necessary precautions to keep their communities safe,” Freitas said in a statement. “Despite the lack of statewide enforcement, teachers and school staff will work closely with districts and counties to ensure compliance with state guidelines.”

Lillian Luu, who teaches at Pioneer High School in San Jose and is scheduled for her first vaccine appointment on Wednesday, said she has mixed feelings about the new legislative package.

“Newsom’s tying everything to money just doesn’t sound like the right incentive,” said Luu, who is teaching remotely.

Luu said she wants to see her students in person again. “All I stare at are gray boxes on Webex. I know a lot of students are definitely wanting to go back,” she said. But, she said, “There’s a lot of anxiety – how are we going to teach in person and virtual?”

Her union’s agreement with her school district requires the county to be in the orange, or “moderate,” reopening tier or all teachers to be vaccinated before teachers return for in-person classes April 21, she said. Under the new proposal, the district would have to change that plan if it wants the state’s incentive funding.

“There’s a lot of hate on unions but the unions are protecting us, because we’re not getting good communication from the district on what they’re doing to protect teachers and students,” Luu said. “Time and time again, the burden has always fallen to teachers to figure it out.”

Ting, the San Francisco Democrat who introduced the counterproposal to Newsom’s plan, said he hoped the compromise and greater vaccine availability would help reopen campuses in the state’s largest districts, such as Los Angeles and San Francisco, where the reopening debate has been the most fraught.