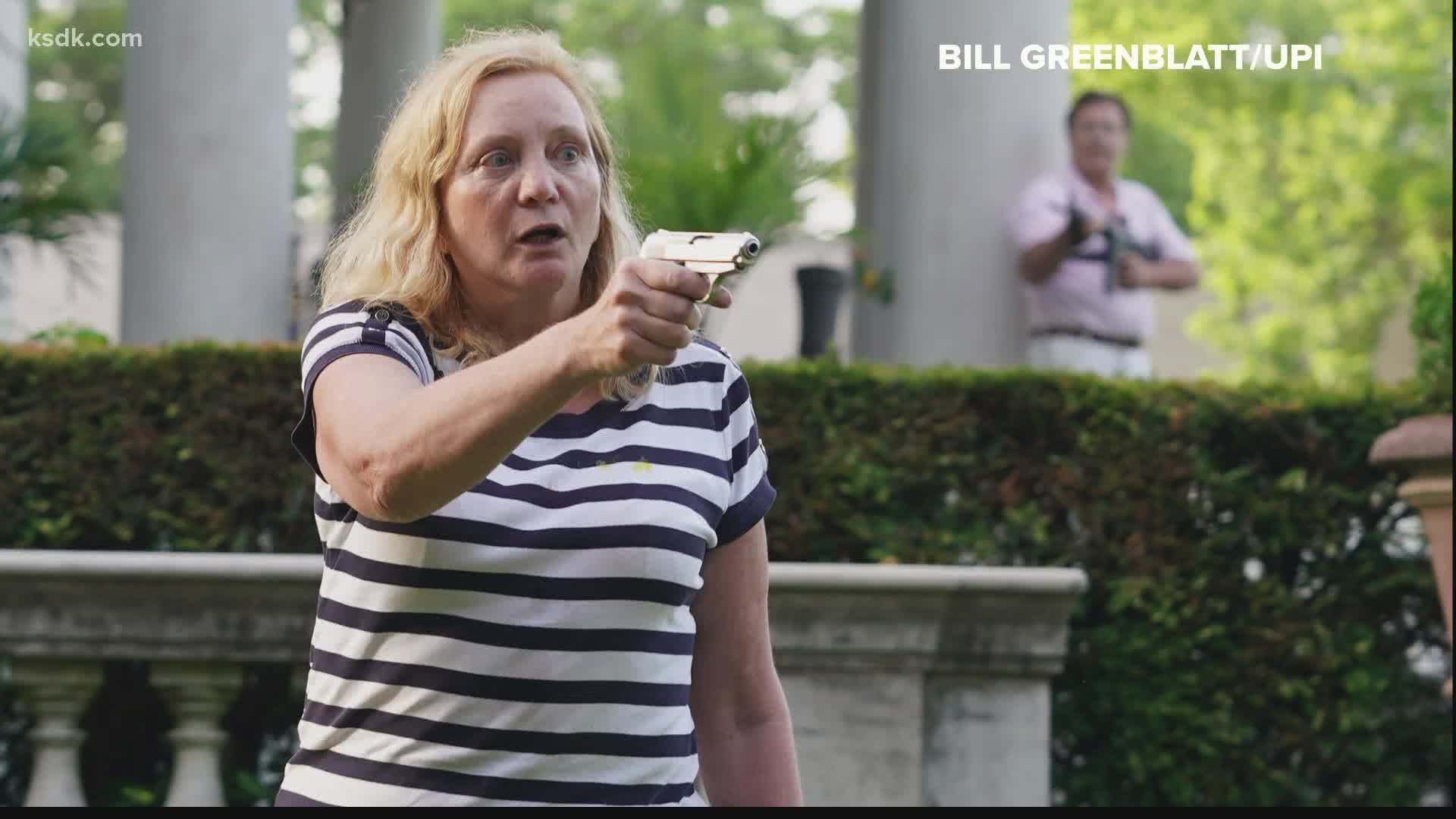 ST. LOUIS — A man and a woman pointed guns at protesters who marched through the Central West End Sunday night to call for Mayor Lyda Krewson to resign.

Videos from the protest showed the man pointing a semi-automatic rifle and a woman pointing a pistol at the crowd marching down the street. The videos circulated widely on social media Sunday night.

The couple has been identified as Mark and Patricia McCloskey.

According to Saint Louis University Lawyer John Amman, their actions could possibly be classified as assault by putting protesters in fear of their safety.

People have a right to threaten force if they are threatened, Amman said. However, if a group of protesters is walking by a home and not doing anything to the homeowners specifically, then they don’t have the right to threaten lethal force without an imminent threat.

The protest, which was organized by Expect Us, started near the intersection of Maryland Plaza and North Euclid Avenue, and stopped at Krewson's Lake Avenue home before heading toward the Delmar Loop.

The protest came two days after a Facebook Live news briefing in which Krewson read the names and street addresses of protesters who are calling on the city to defund the police department, a move which the ACLU called "shocking and misguided" and resulted in online backlash. An online petition started over the weekend calling for her to resign has more than 40,000 signatures.

1 / 5
UPI
A husband and wife hold a pistol and semi-automatic rifle as protesters walk past their house enroute to St. Louis Mayor Lyda Krewson's home during a protest march in St. Louis on Sunday, June 28, 2020. The man and woman greeted about 300 protesters, shouting as they marched past their home. No shots were fired and the protesters moved on. Photo by Bill Greenblatt/UPI

Friday night, Mayor Krewson issued a statement apologizing for her actions. The full statement is below:

"In an effort to be transparent and accessible to the public during the Covid-19 pandemic, for more than three months now I have been doing tri-weekly community updates on Facebook. Tonight, I would like to apologize for identifying individuals who presented letters to me at City Hall as I was answering a routine question during one of my updates earlier today. While this is public information, I did not intend to cause distress or harm to anyone. The post has been removed."

The apology came after two St. Louis Board of Aldermen members and commenters online criticized the mayor for what many people called "doxxing" the protesters.

"Hey @LydaKrewson. So not cool to doxx my constituents who support #DefundThePolice on your FB live today. It’s a move designed to silence dissent, and it’s dangerous. #DoBetter," wrote Alderwoman Megan Green who represents Ward 15 in south city.

"No leader should resort to intimidation of the residents they were elected to represent. Period." tweeted Alderwoman Cara Spencer, who represents Ward 20 in south city and is also running for mayor.

The ACLU of Missouri issued the following statement Friday evening regarding Mayor Krewson’s reading of names and addresses:

“Today adds to the list of things we never thought we would have to say. To be clear, it is shocking and misguided for Mayor Lyda Krewson of St. Louis, to broadcast the addresses of those who dare to express a different viewpoint on an issue of public concern. It serves no apparent purpose beyond intimidation. We are stronger when we foster open dialogue. The chilling of debate should bother everyone, no matter whether they agree or disagree with the mayor on this particular issue.” – Sara Baker, Policy Director ACLU of Missouri

5 On Your Side, investigative reporter PJ Randhawa is looking into understanding the rules and laws of private streets and trespass laws in St. Louis. Many streets in the Central West End neighborhood have signs warning that streets are private, and many have their own security force on patrol.

We are posting the below video, that shows protesters entering the area through a gate, by simply opening it. This video is posted by a channel that describes itself as a YouTube commentary channel that makes protest compilations, Twitter reactions, YouTube drama updates, Election updates, and more.

We are posting it here to provide some context to the conversation of how the protestors entered the neighborhood. We'll continue to follow this story as new information becomes available.