The former Navy SEAL says he will be “effectively blind” for the next few weeks as he continues to recover. 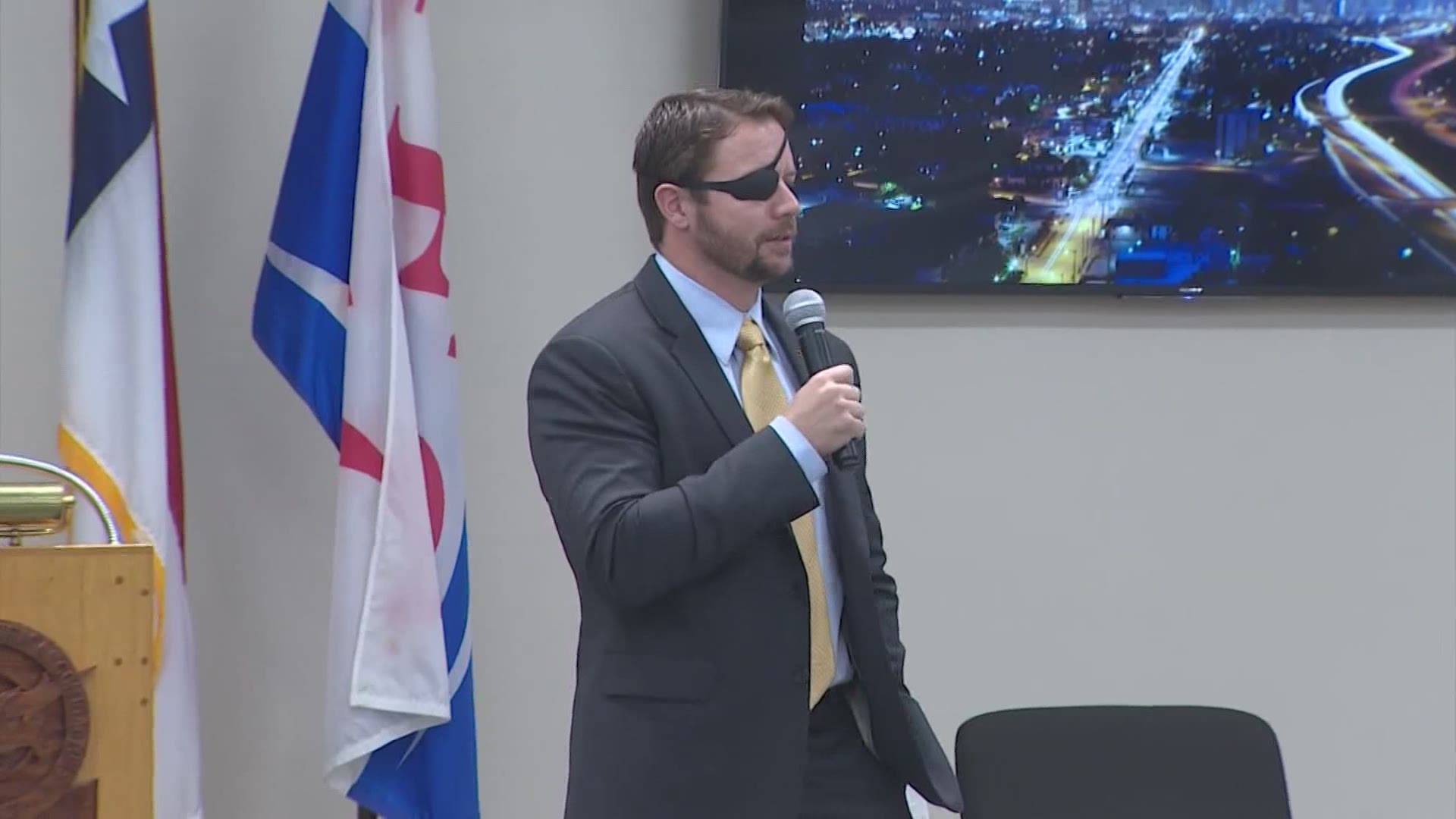 HOUSTON — Congressman Dan Crenshaw is recovering after having emergency surgery on his left eye after doctors discovered his retina was detaching.

Crenshaw, R-Houston, said he will be off the grid for a few weeks since he will be “effectively blind” as he continues to recover from the procedure.

The congressman said it started when he noticed blurry spots in his vision and went to get checked out by an ophthalmologist on Thursday. That is when they made the discovery about his retina detaching.

“This is a terrifying prognosis for someone with one eye, and the nature of the injuries that I sustained in Afghanistan. Anyone who knows the history of my injuries knows that I don’t have a ‘good eye,’ but half a good eye,” Crenshaw said. “The blast from 2012 caused a cataract, excessive tissue damage, and extensive damage to my retina. It was always a possibility that the effects of the damage to my retina would resurface, and it appears that is exactly what has happened.”

The former U.S. Navy SEAL was originally injured on his third deployment in 2012 when he was hit by an IED blast during a mission in Afghanistan. The blast destroyed his right eye and left his left eye severely damaged.

He regained eyesight in his left eye after several surgeries and was deployed twice serving in the Middle East in 2014 and then South Korea in 2016.

Crenshaw said his prognosis on Thursday was very bad and his wife took him to have the emergency surgery Friday morning at Michael E. DeBakey VA Medical Center in Houston.

He did say the surgery went well and thanked the doctors and nurses who took care of him.

“I want to especially thank the phenomenal team of doctors and nurses at the VA who took such good care of me,” the Congressman said. “During the surgery they put a gas bubble in my eye, which acts as a bandage for my retina. This means I have to be face-down for the next week or so, unable to see anything.”

Crenshaw explained that he will not be conducting interviews and posting on social media for a while except to provide updates on his health and recovery.

His congressional offices in Washington, D.C. and Houston will continue to operate to assist constituents.

“I have gotten through worse before, and I will get through this,” Crenshaw said. “I’ve got Tara by my side, and we are here in Houston with plenty of support. A few prayers that my vision will get back to normal and that I will make a full recovery wouldn’t hurt, though, and would be much appreciated. Thank you in advance for your thoughts, prayers, and support.”

What is retinal detachment?

Those suffering from a detached retina may not be able to see as clearly as normal and may notice other sudden symptoms, including:

The NEI says a retinal detachment is a medical emergency, and if someone is experiencing symptoms, to visit an eye doctor or the emergency room right away.

Doctors say symptoms of retinal detachment often come on quickly, and if not treated right away, could increase the risk of permanent vision loss or blindness.

Dr. Garvin Davis, an ophthalmologist and retina specialist at UTHealth and Memorial Hermann said, “Retinal detachments are more common in the presence of trauma however it can just happen in general."

“The longer the retina is detached the less likely it is that vision can restored to its previous condition," Dr. Davis said.

Crenshaw revealed doctors put a gas bubble in his eye which acts as a bandage for his retina.

“When the bubble is in the eye light can’t get through and you really can’t see during that period so the only thing you can see is maybe a hand waving in front of your face,” Dr. Davis said.

The congressman said he’ll have to be face-down for a week.

“So we want the patient face down because as the patient is face down the bubble floats and as it floats in the eye it pushes the very important part of the retina, the macula, back onto the surface of the eye,” Dr. Davis said.

Dr. Davis isn’t treating Rep. Crenshaw but says recovery depends on the person. He said the odds of reattaching a retina is up to 95 percent successful.