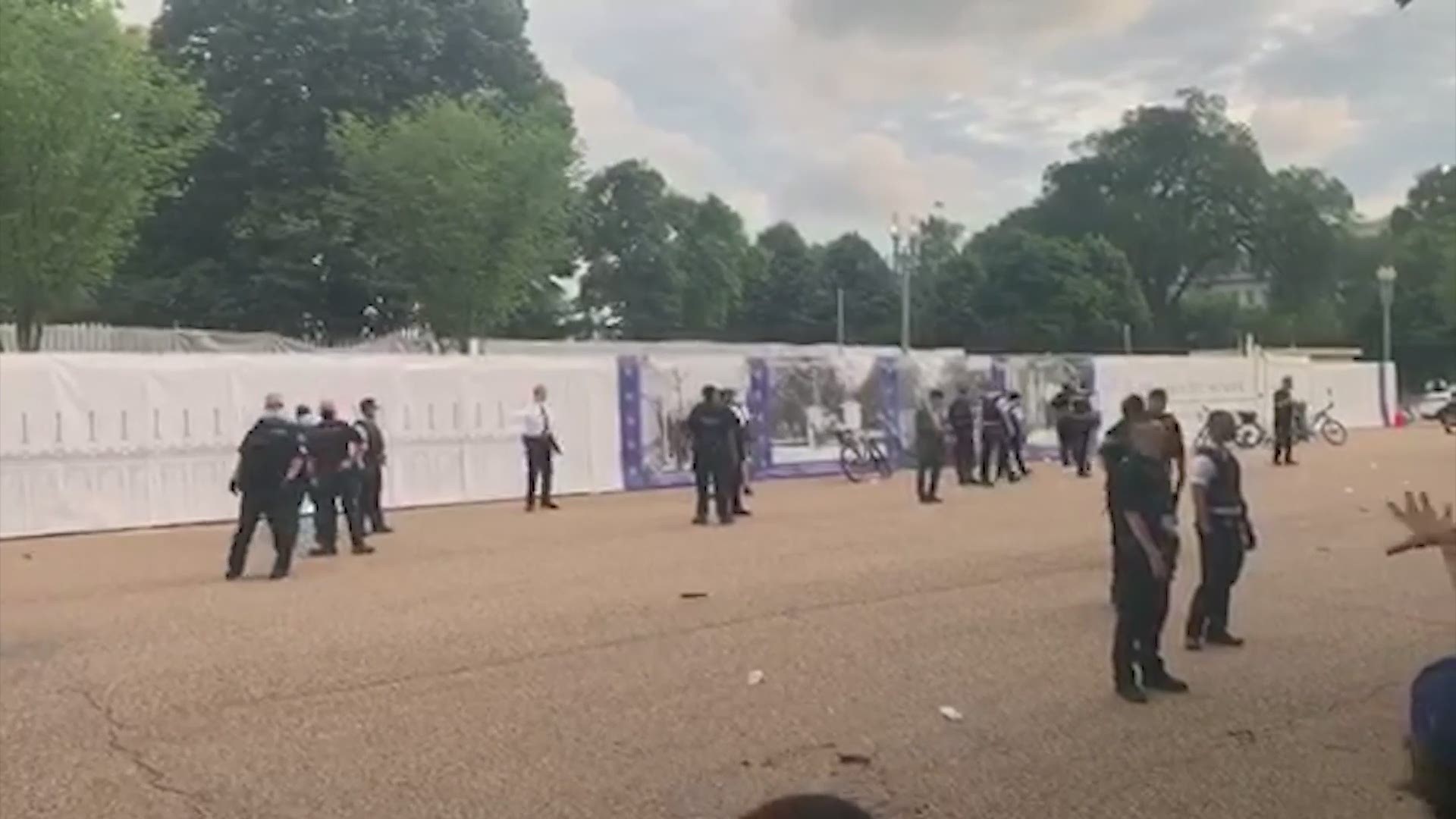 WASHINGTON — The White House was put on lockdown for a little over an hour Friday night after demonstrators gathered in Lafayette Square protesting the death of George Floyd in Minneapolis. Floyd died Monday after being held down under the knee of a police officer, an incident that was caught on camera, and led to the firing of four officers and criminal charges filed against one.

A crowd of a couple hundred marched down 14th Street Northwest to the White House, where chants of "no justice, no peace," "your silence is violence," and "black lives matter," were heard. The protest moved on towards Capitol Hill, before blocking traffic on 1-395 around 10 p.m. Eventually, crowds made their way back to the White House, where protests continued late into the night, with well over 100 people still present at 3 a.m.

President Trump took to Twitter Saturday morning to express his thanks to Secret Service for their handling of the crowds outside the White House.

"Great job last night at the White House by the U.S. @SecretService," the Tweet said. "They were not only totally professional, but very cool. I was inside, watched every move, and couldn’t have felt more safe. They let the 'protesters' scream & rant as much as they wanted, but whenever someone got too frisky or out of line, they would quickly come down on them, hard - didn’t know what hit them."

RELATED: Protests continue into the night. Here's what 'justice for George Floyd' protests looked like throughout the District

Some protesters tried to push through barriers set up by the U.S. Secret Service along Pennsylvania Avenue, and threw bottles and other objects at officers wearing riot gear, who responded with pepper spray.

"Nobody came close to breaching the fence," Trump said. "If they had they would have been greeted with the most vicious dogs, and most ominous weapons, I have ever seen. That’s when people would have been really badly hurt, at least." 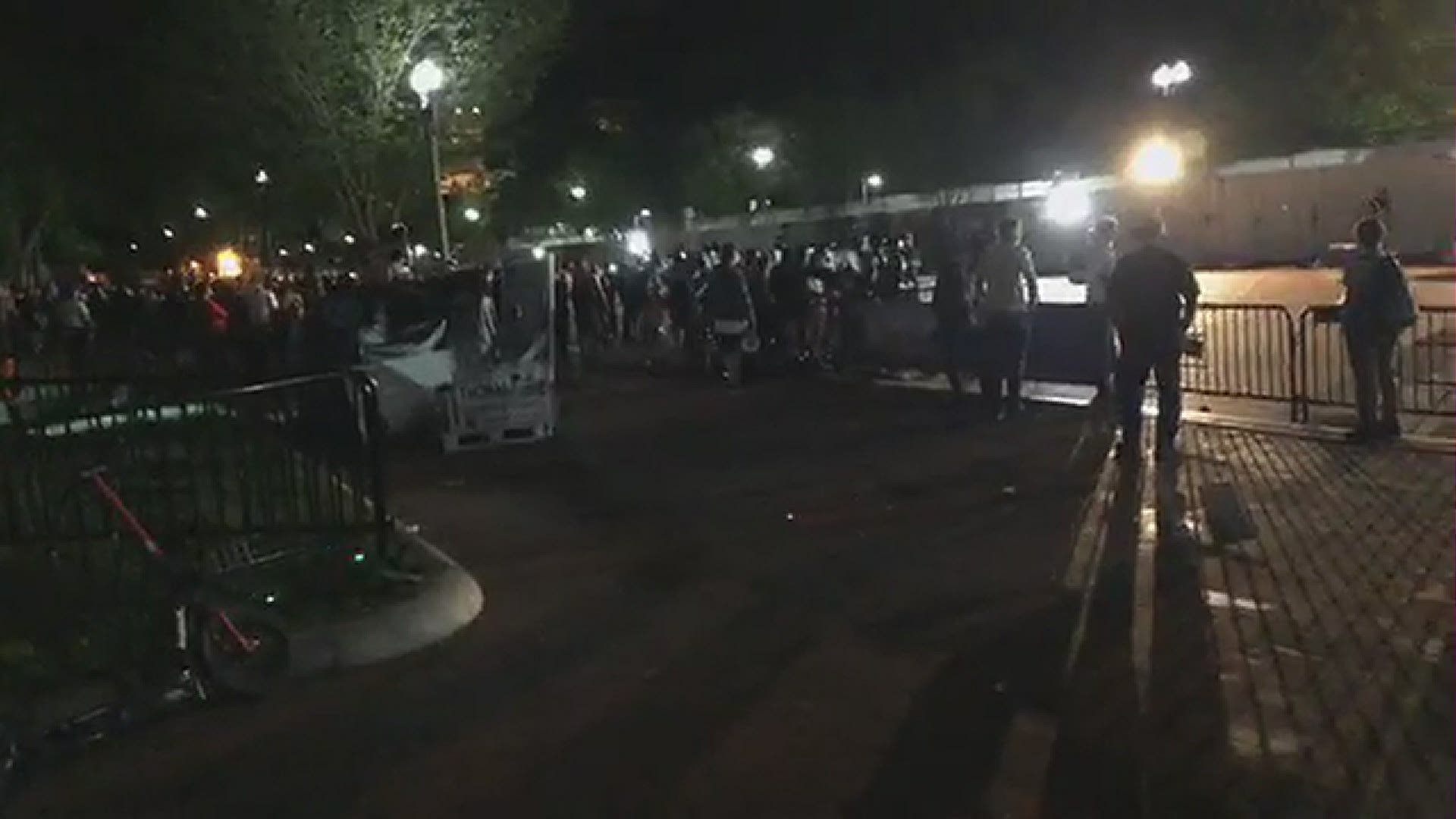 The president also criticized D.C. Mayor Muriel Bowser who, according to the president, would not allow District of Columbia city police to get involved with protecting the White House.

"On the bad side, the D.C. Mayor, @MurielBowser, who is always looking for money & help, wouldn’t let the D.C. Police get involved," Trump tweeted. "'Not their job.' Nice!"

Bowser responded to the president's tweets, calling for peace and restraint, and emphasizing that DC Police "will always protect DC and all who are in it."

"My police department will always protect DC and all who are in it whether I agree with them (such as those exercising their First Amendment Right) or those I don’t (namely, @realdonaldtrump)," the mayor tweeted. "While he hides behind his fence afraid/alone, I stand w/ people peacefully exercising their First Amendment Right after the murder of #GeorgeFloyd & hundreds of years of institutional racism There are no vicious dogs & ominous weapons. There is just a scared man."

RELATED: I-695 temporarily blocked as hundreds of justice for George Floyd protesters march