The president tweeted his thanks to the Secret Service for handling the protests, and said Bowser "wouldn't let the DC Police get involved." 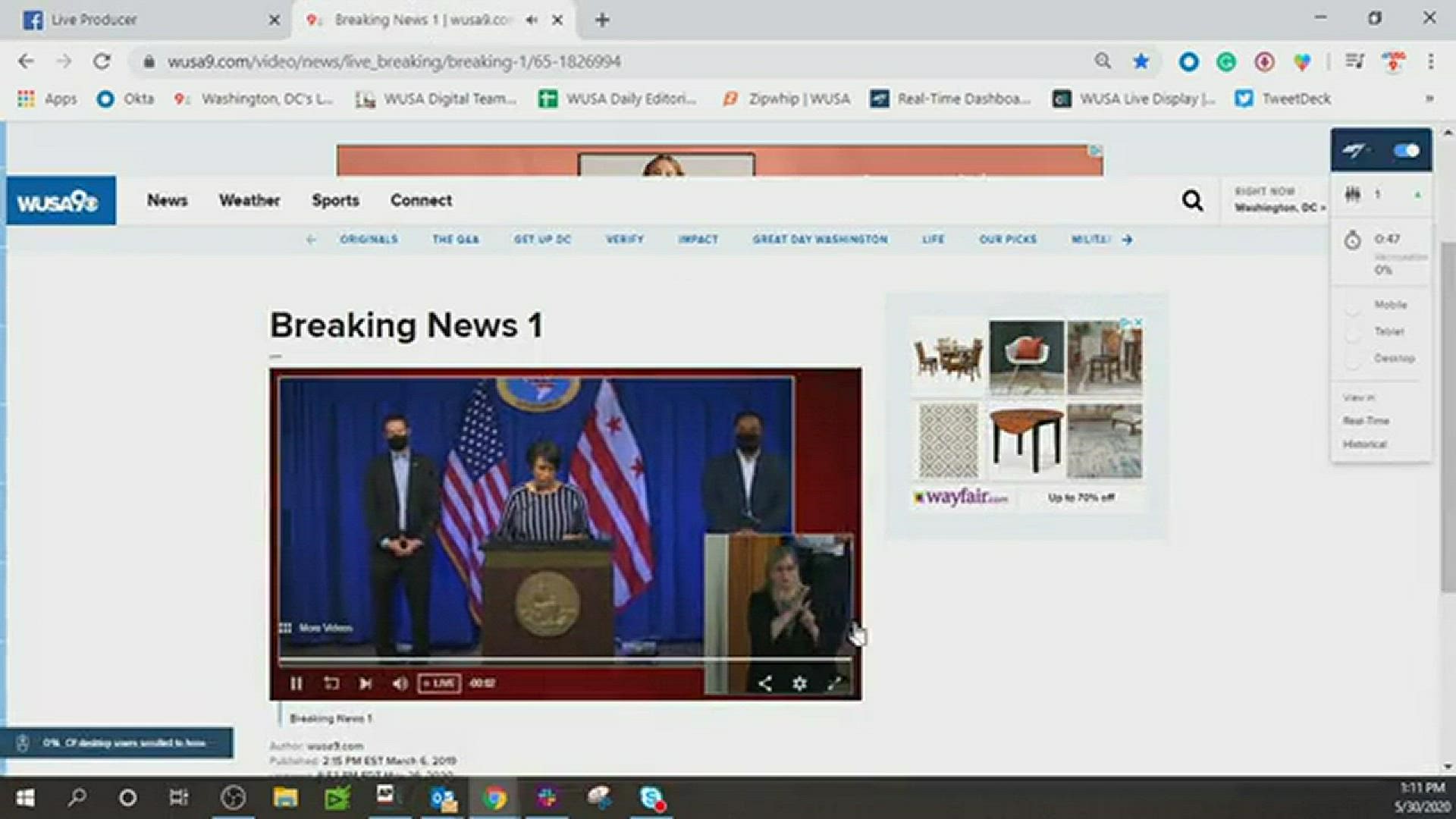 WASHINGTON — Demonstrators marched through D.C. for hours Friday evening, continuing into early Saturday, protesting the death of George Floyd in Minneapolis. Floyd died Monday after being held down under the knee of a police officer. The White House was put on lockdown for a little over an hour Friday night after a crowd of several hundred formed in Lafayette Square.

President Donald Trump took to Twitter Saturday morning to address the protests, thanking the Secret Service and criticizing D.C. Mayor Muriel Bowser who, according to the president, would not allow D.C. police to get involved with protecting the White House.

"On the bad side, the D.C. Mayor, @MurielBowser, who is always looking for money & help, wouldn’t let the D.C. Police get involved," Trump tweeted. "'Not their job.' Nice!"

Bowser responded to the president's tweets emphasizing that D.C. police "will always protect D.C. and all who are in it."

"My police department will always protect DC and all who are in it whether I agree with them (such as those exercising their First Amendment Right) or those I don’t (namely, @realdonaldtrump)," the mayor tweeted. "While he hides behind his fence afraid/alone, I stand w/ people peacefully exercising their First Amendment Right after the murder of #GeorgeFloyd & hundreds of years of institutional racism There are no vicious dogs & ominous weapons. There is just a scared man."

RELATED: Protests continue into the night. Here's what 'Justice for George Floyd' protests looked like in DC

The mayor held a joint press conference Saturday with DC Police Chief Peter Newsham to address the city's response to the protests.

"No one needed to ask the Metropolitan Police Department to get involved, because we were already involved," Bowser said. "Our police were doing their jobs from the start. MPD, the U.S. Park Police, and the Secret Service coordinated throughout the evening and night, and at no time was the Chief of Police concerned about losing control of protest activity."

Newsham added that the city's protests resulted in zero MPD arrests and zero reports of use of force or injuries.

Bowser called for peace and restraint amidst the unrest that has unfurled across the country since Floyd's death Monday.

"I call upon our city and our nation to exercise great restraint even while the President tries to divide us," she said. Our nation is grieving the murder of George Floyd and every Black person who has been killed by an unjust and unfair system. People are tired, sad, angry, and desperate for change. And we need leaders who recognize this pain and in times of great turmoil and despair, can provide us a sense of calm and a sense of hope. Instead what we’ve got in the last two days from the White House is the glorification of violence against American citizens. Our power, we know, is in peace, in our voices, and ultimately at the ballot box."

She ended her Twitter thread with a quote from Dr. Martin Luther King, Jr.

"It is no longer a choice, my friends, between violence and nonviolence," the tweet read. "It is either nonviolence or nonexistence."

RELATED: I-695 temporarily blocked as hundreds of justice for George Floyd protesters march