"Father Joe was a constant source of inspiration, hope and light." 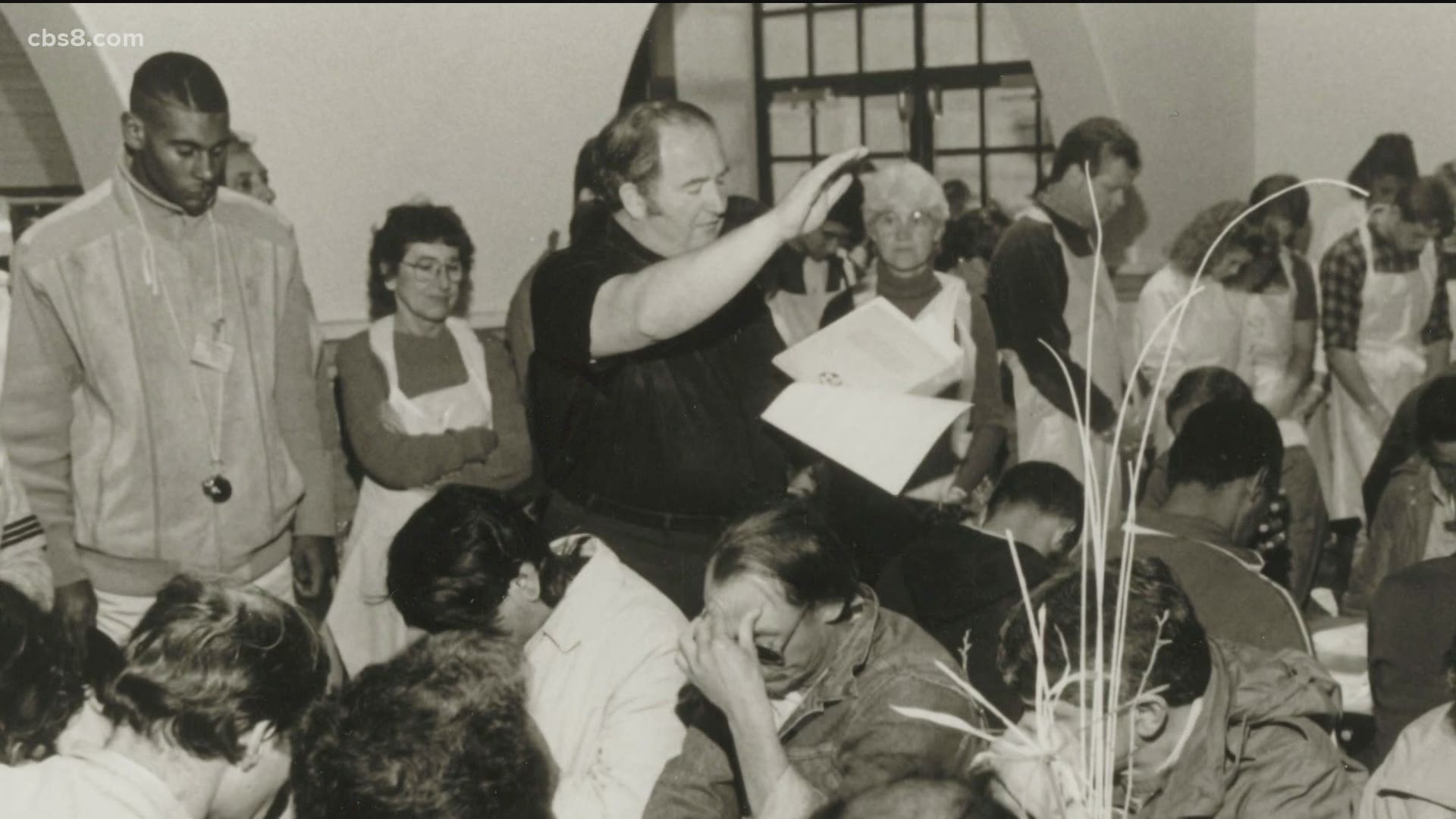 Calling him a "visionary and leader," Father Joe's Villages shared that Carroll passed away after a battle with diabetes. Carroll died early Sunday morning surrounded by friends and family, according to the homeless organization that was named in his honor.

"Father Joe was a constant source of inspiration, hope and light," said Deacon Jim Vargas, president and CEO of Father Joe's Villages during a Sunday afternoon news conference. "He took San Diego by storm. He created innovative programs in his over 30 years of service."

Vargas said further details about a public celebration of life service would be announced in the coming days.

It is with great sadness that we inform you that Father Joe’s Villages' founder and President Emeritus, a San Diego visionary and leader, Father Joe Carroll, passed away early in the morning of July 11. He will be missed more than words can express. pic.twitter.com/LFBA7qbbm3

Carroll was president and CEO of the St. Vincent de Paul Village from 1982 until his retirement in 2011. It was renamed in his honor to Father Joe's Villages in 2015. His namesake organization has assisted thousands of homeless residents in finding shelter, medical assistance, child care, housing and other resources since he took over nearly 40 years ago.

Bishop John Dolan said he knew Father Joe even before the priesthood during their time at a seminary.

"He always had an open heart and open home, especially for the poorest of the poor," Dolan said. "He was an amazing man who always shot for the stars. He only expected the best. He's been a human being to human beings, rich and poor alike."

"Father Joe Carroll was a priest who made Christ's message of compassion and mercy real in a world where we so often look the other way rather than embrace those who are suffering in our midst," said Robert McElroy, the bishop at the Roman Catholic Diocese of San Diego. "Given the task of rejuvenating our Diocesan outreach to the homeless four decades ago, he completely recreated that outreach and gave to San Diego an incredible network of programs for those without shelter that radiate a profound and unrelenting humanity and hope.

"The housing network of Father Joe's Villages is a testimony to his life work," the bishop continued. "But an even deeper testimony lies in the fact that Father Joe taught so many of us in San Diego to see the homeless as truly our neighbors, equal in dignity and children of the one God who is Father of us all. In this deeply pastoral ministry, Father Joe Carroll stands distinguished in our county and in our nation."

Father Joe's best friend of over 40 years David Malcolm said it's been very difficult to be without him. "I lost one of my best friends," said Malcolm. They've been through a lot together, "the last several days anyone who has gone through having to call in hospice can certainly appreciate the fact that those around him suffered and felt his pain."

Malcolm said Father Joe was like a celebrity in San Diego, for his good work and effort to help the homeless community. "His legacy he's touched and helped more people than any other San Diegan in our history. He's given people second chances to get into productive society," said Malcolm.

Former San Diego Mayor Kevin Faulconer praised Carroll as "a champion for the people that other people forgot -- the poor, the sick, the homeless. He inspired an entire city to care as much as he did, creating lasting organizations that helped so many. And he did it all with a twinkle in his eye. Rest In Peace."

Eric Casazza, board chair of Father Joe's Villages, said Carroll's example "was an inspiration for all of us. We are honored to have been inspired by his generosity of spirit and to continue his lifelong commitment to serving San Diego's most vulnerable."

A representative of the Carroll family, Jose F. Gonzalez, thanked the public for their thoughts and prayers.

"San Diego has lost one of its legends," Gonzalez said. "But his legend lives on. We ask everyone to remember him on this day."

State Sen. and Senate President Pro Tem Toni Atkins, D-San Diego, called it "a sad day for San Diego. Father Joe was a dedicated advocate -- someone who always showed up to help our neighbors in need, in big ways and small. He was a bright light of hope and love for our community."

Pat Kilkenny, chairman of the Lucky Duck Foundation, for which Carroll was a special advisor to the board of directors, released the following statement: "What (Father) Joe Carroll did in a lifetime is impossible to put into words. He was an absolutely extraordinary human being who saved countless lives and made San Diego a better place. We are all so much better for knowing him and we will endeavor to perpetuate his legacy and impact through the work of the Lucky Duck Foundation."

Tamera Kohler, CEO of the Regional Task Force on the Homeless, said: "We are deeply saddened by the loss of one of San Diego's most ardent advocates for vulnerable people. In his three decades devoted to helping people without homes, Father Joe Carroll's approach centered on the dignity of the individual, going beyond emergency shelter with services like health care, vocational training and finding a path to stable permanent housing. His unrelenting determination, coupled with his charm and compassion, leave an unmatched legacy."

Carroll once said he wanted to serve more than 1.7 million meals to those in need, so he held a race to raise the money. The 5K race became an annual tradition in Balboa Park on Thanksgiving Day. Runners who raised more than $100 received a Father Joe bobblehead collectible.

In 2019, San Diego State University awarded Carroll an honorary degree of Doctor of Humane Letters in recognition of his lifelong dedication to the underserved communities of San Diego.

Carroll was born in New York, but moved to Southern California in his early 20s. He enrolled at St. John's Seminary in Camarillo, in Ventura County, where he was expelled for focusing too much on material gain while running the seminary's bookstore.

So Carroll migrated to San Diego, where he finished his studies at the University of San Diego and was ordained in 1974. He worked at St. Rita Catholic Church in Valencia Park, then was put in charge of the St. Vincent de Paul thrift shop downtown, where he would find his true calling and build his legacy.

He turned a parking lot near the store into a homeless center and worked to acquire other property around San Diego to create a "one-stop-shop" where services for the homeless could be consolidated. In subsequent years he built a powerful fund-raising effort, and by the time of his retirement, the organization employed close to 500 people and boasted a budget of $40 million.

A private funeral Mass was scheduled to be held soon with his close friends and family.

The public was invited to leave flowers and messages for Carroll in a designated space between 15th and 16th Streets on Imperial Avenue next to Father Joe's Villages Joan Kroc Center.

Many organizations and officials throughout San Diego were sharing their memories and condolences upon learning of Carroll's passing:

Father Joe is etched in the history of San Diego. His relentless dedication to serving our most vulnerable saved, and changed, countless lives. His legacy will continue to be written for years to come. He will be sorely missed. https://t.co/rBFlII4Uqv

On behalf of the team at PATH San Diego, we share our condolences on the passing of Father Joe Carroll, who dedicated his life to helping unhoused San Diegans. His legacy lives on in the work @FatherJoes does every day to provide support to people experiencing homelessness. https://t.co/acWIkEhIKn

A sad day for San Diego. Father Joe was a dedicated advocate—someone who always showed up to help our neighbors in need, in big ways and small. He was a bright light of hope and love for our community. https://t.co/WQxd8biSZD

“We are deeply saddened by the loss of one of San Diego’s most ardent advocates for vulnerable people. In his three decades devoted to helping people without homes, Father Joe Carroll’s approach centered on the dignity of the individual...