Out of the eight captains promoted to the Cal Fire Riverside unit, Shavawn Johnson was the only woman to achieve that rank. 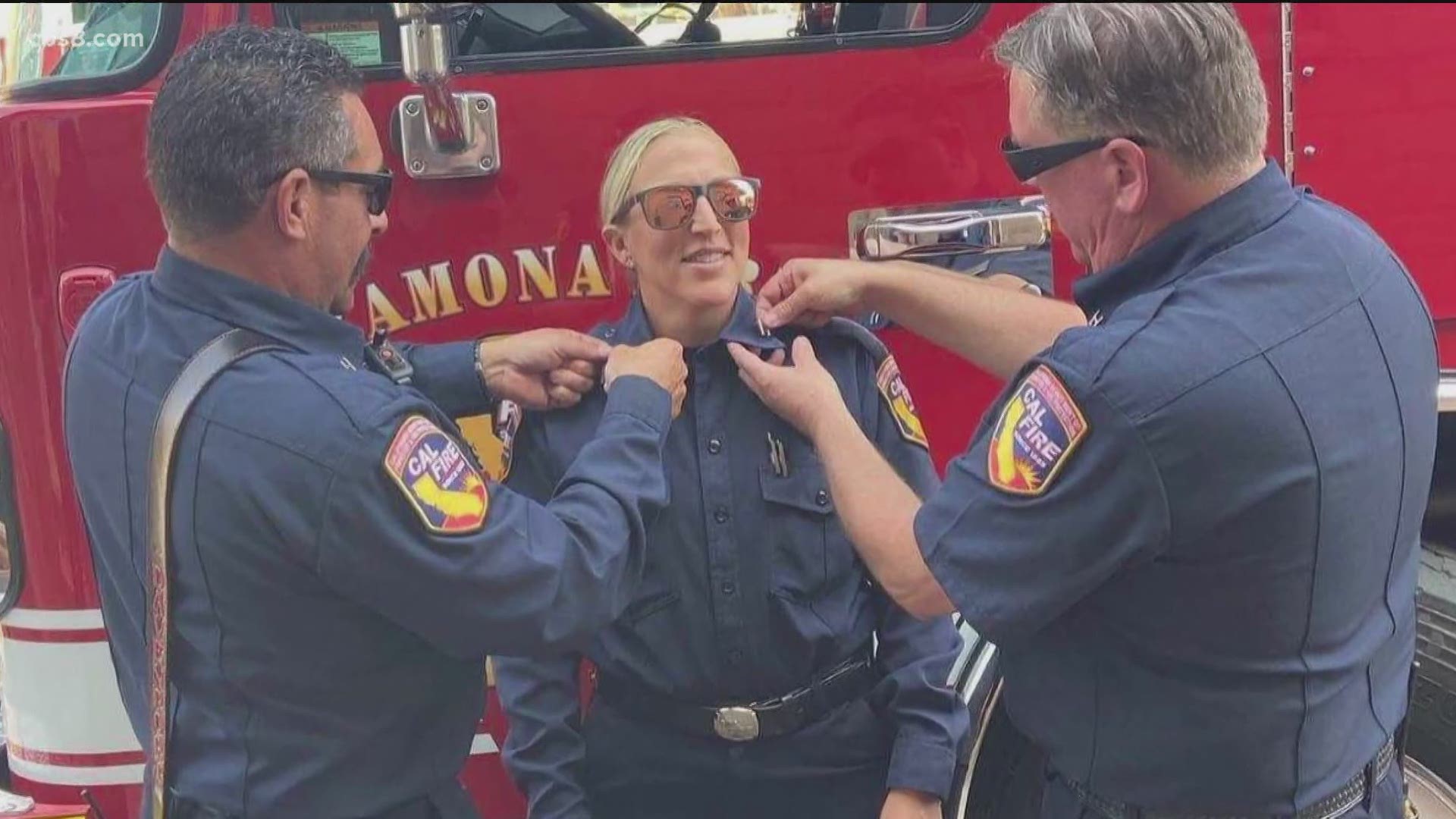 RANCHO SAN DIEGO, Calif. — After spending much of her career as the only female firefighter in her unit, Shavawn Johnson is excited to now be a Cal Fire captain.

"I think all the hard work pays off to this point. Captain is kind of the milestone we all work for,” Johnson said.

Moving on up in rank, with the badge to prove it, Johnson is elated she went from Cal Fire firefighter to engineer and now captain.

“[There were] lots of written tests, studying, learning different SOPs within the state department, training, classes. Everything kind of builds up to this point. Blood sweat and tears - it’s not easy, but you’ll get through it,” she said.

Spending a decade with Cal Fire San Diego, Johnson first knew firefighting was in her blood when the department would come to her house a lot as a child when her grandfather suffered numerous falls from his battle with cancer.

"One day, I actually saw a female firefighter that came by, and right then, I knew, 'this is something that I want to do,'" she said.

Johnson started as a seasonal firefighter in Riverside in 2000 before going to paramedic school and then to the Barona Fire Department with not many, if any, other women.

"I have actually pretty much been the only one most of my career. So, when you do see another female fighter it is uplifting,” she said.

Johnson’s biggest challenge is balancing being a mother and a firefighter.

"[It's hard] missing your kids. Obviously, when you're at work and trying to balance between that fine line of being a good mom and good at your job, but I have a very supportive husband, who takes care of the kids while I’m gone and also works,” said Johnson the mother of a 6-year-old daughter and 3-year-old twins.

A Riverside County resident, Johnson will be closer to her family now with her promotion to captain in the Lake Elsinore area.

"This will be great for my family," she said. "They can come visit when I'm stuck on for a lot of days.”

“I’m incredibly proud of her even though we only spent about a year together in the same fire station. I consider her someone who is a friend of mine. I'm happy to see that she's risen to this rank. She's definitely earned it,” said Cal Fire PIO Captain Issac Sanchez.

A huge congrats to our very own Shavawn Johnson on her promotion to Fire Captain! She has served San Diego County for...

Sanchez said with every new group of firefighter hires, there are more women and in top level positions.

He offered some advice for Johnson, from captain to captain:

“Be patient, learn your craft, take your role very seriously because those young firefighters and engineers are looking up to you,” Sanchez said.

Johnson said she officially starts as a captain on Monday, and after orientation, she'll be on the job at her new post in Lake Elsinore in the next couple weeks.

“Being one of the few women, I think that motivates me, even more, to make my family proud, make my children proud, and all women proud that we can in fact do it as well as men, and it's a great feeling," Johnson said.