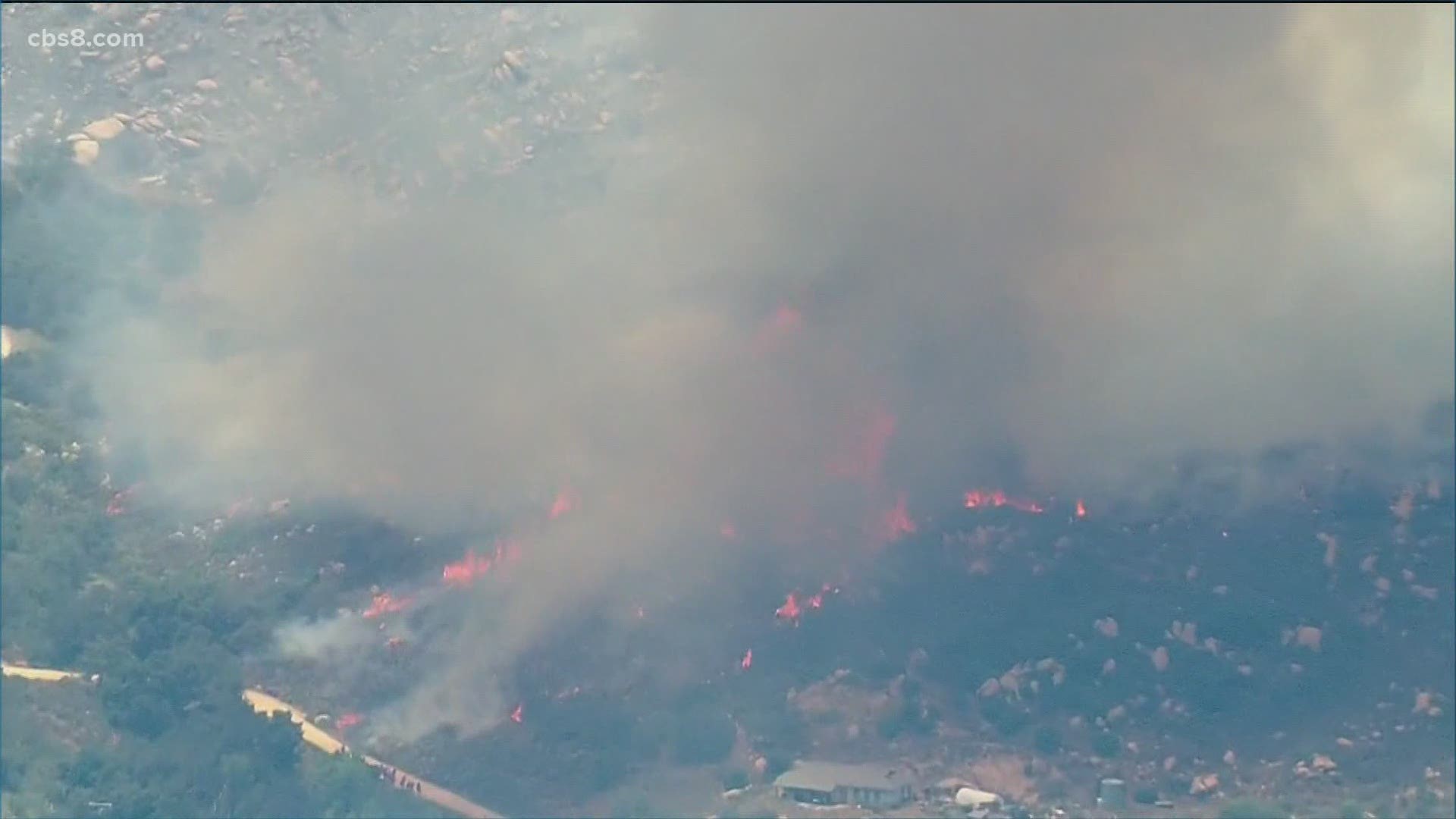 The Skyline Fire in Lawson Valley near Jamul is now fully contained.

The Skyline Fire is now 90% contained.

The Skyline fire remains at 100 acres and is now 80% contained, according to Cal Fire San Diego.

The Border 7 Fire is at 90 acres and is 100% contained, the agency said in a tweet Friday night.

The Skyline fire remains at 100 acres and is now 60% contained, according to Cal Fire San Diego.

The Border 7 Fire is at 90 acres and is 75% contained, the agency said in a tweet Friday night.

Skyline Fire: Update 8:44 p.m.: According to CalFire's website the fire is now 20% contained.

Skyline Fire: Update 6:24 p.m.: All evacuation orders and road closures have been lifted.

Miramar Fire: Update 6:14 p.m.: MCAS Miramar reports the fire is estimated at 25% containment and says crews will work through the night to reach 100%.

Skyline Fire: Update 5 p.m.: CalFire crews continue working on hot spots and containment of the fire near Jamul which remains at 100 acres.

Residents in the area shared with News 8 what they saw and felt as the fire broke out and grew Thursday afternoon.

"It was crazy. You could feel the heat," said Tim Hillman who added he could see black smoke as he returned home in SR-94.

His son had called him minutes before to tell him flames were on the horizon.

"He was a little bit panicked. He said there's a fire going on," he said.

When Hillman arrived at his home on Skyline Truck Trail the fire was getting closer as mild winds pushed the fire in unpredictable directions.

"Embers started fires here and there and it started burning everywhere and it got kind of crazy," he said. "It burned all the way up right up to the fence."

Hillman said he's lived in the area for 30 years and "knows the drill."

Crews fought to stop the rate of spread which was declared around 3:30 p.m. which Hillman and other residents are grateful for. 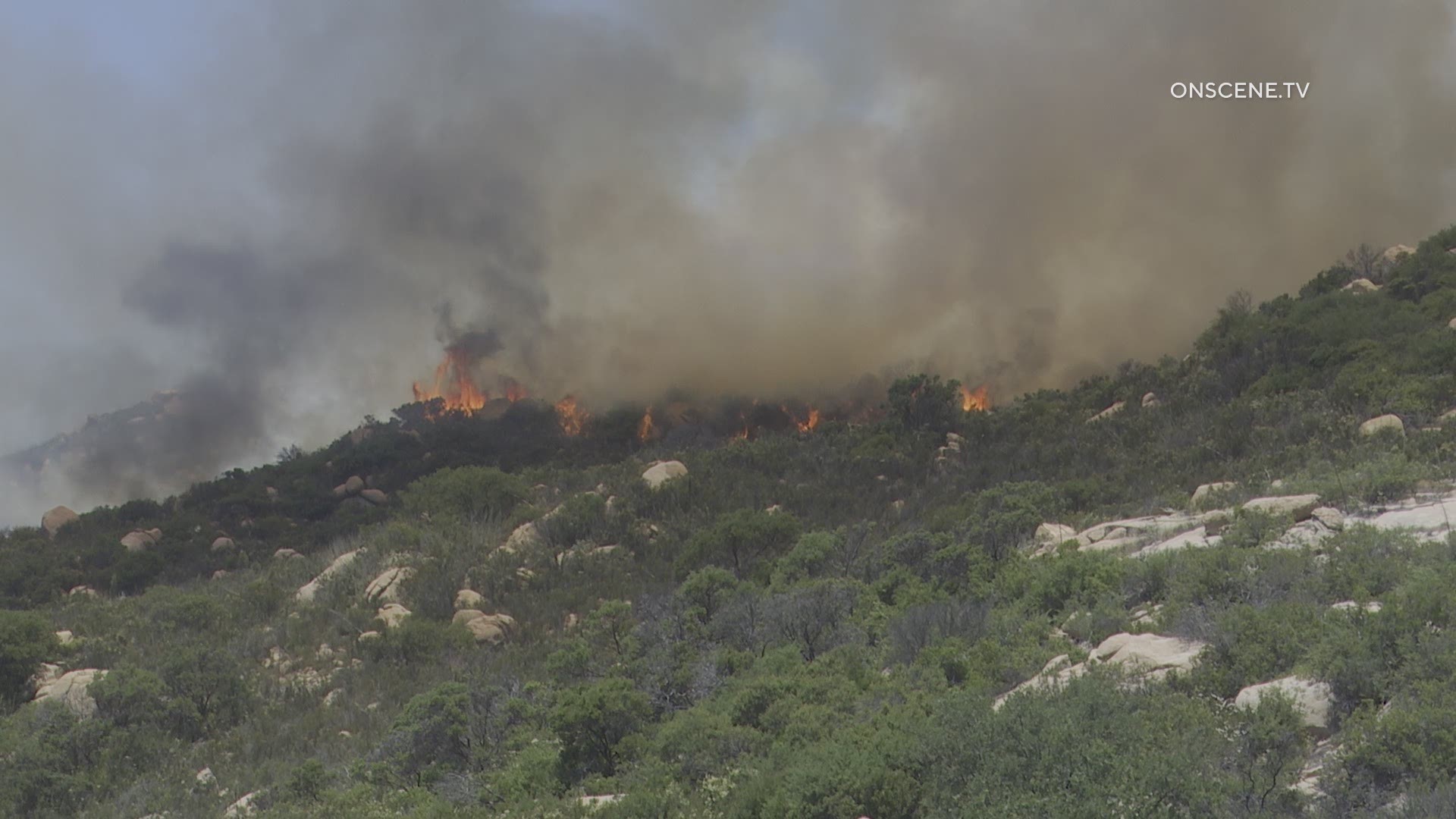 Miramar Fire: Update 3:35 p.m.: Brush fire off Mast Boulevard near Sycamore Landfill in eastern San Diego has blackened about 15 open acres, according to the San Diego Fire-Rescue Department. There are no reports of structural threats.

SDFD reported that air tankers were released from the scene as of 3:24 p.m.

Skyline Fire: Update 3 p.m.: Cal Fire reports the forward rate of spread has been stopped and the fire remains at 100 acres and is 10% contained. Cal Fire PIO Isaac Sanchez reports crews will likely remain on scene for mop-up containment overnight into Friday. Evacuation orders remain in place but repopulation plans are underway.

Miramar Fire Update 2:08 p.m.: Firefighters are working to put out a slow-moving brush fire being called Miramar Fire that has spread over about three open acres off Mast Boulevard, near Sycamore Landfill and the southeastern reaches of Marine Corps Air Station Miramar, according to the San Diego Fire-Rescue Department.

The blaze erupted for unknown reasons off the 17000 block of Skyline Truck Trail in Lawson Valley near Jamul shortly before 12:30 p.m., according to Cal Fire.

Within an hour, the flames had spread over about 20 acres and were threatening at least one structure, the state agency reported. Within 90 minutes the fire had grown to 100 acres.

As ground and airborne crews worked to subdue the blaze, authorities issued an evacuation order for homes between the 15600 and 17700 blocks of Skyline Truck Trail, and shut down the rural roadway between Honey Springs and Lawson Valley roads.

Skyline Fire Update 1:53 p.m. Evacuation orders for the Skyline Fire have been widened to include an area along Skyline Truck Trail from the 1500 block of Twisted Oak Road; includes area on Wisecarver Truck Trail.

Skyline Fire Update 1:42 p.m. A temporary evacuation point for the Skyline Fire has been established at the Regal Edwards Theater in Rancho San Diego

Skyline Fire Update 12:43 p.m. Firefighters are at the scene of a vegetation fire at the 17000 block of Skyline Truck Trail in Lawson Valley. The fire is reported to be at 20 acres with moderate rate of spread according to Cal Fire Twitter.

An unseasonable hot spell will continue Thursday in San Diego County, but cooling will arrive throughout the region on Friday, according to the National Weather Service.

A trough of low pressure will move in from the coast on Friday, forecasters said.

A trio of large wildfires continue to burn across open terrain on the grounds of Camp Pendleton amid a late-spring heat wave Wednesday, sending plumes of smoke over northern San Diego County but posing no threats to military or civilian structures. 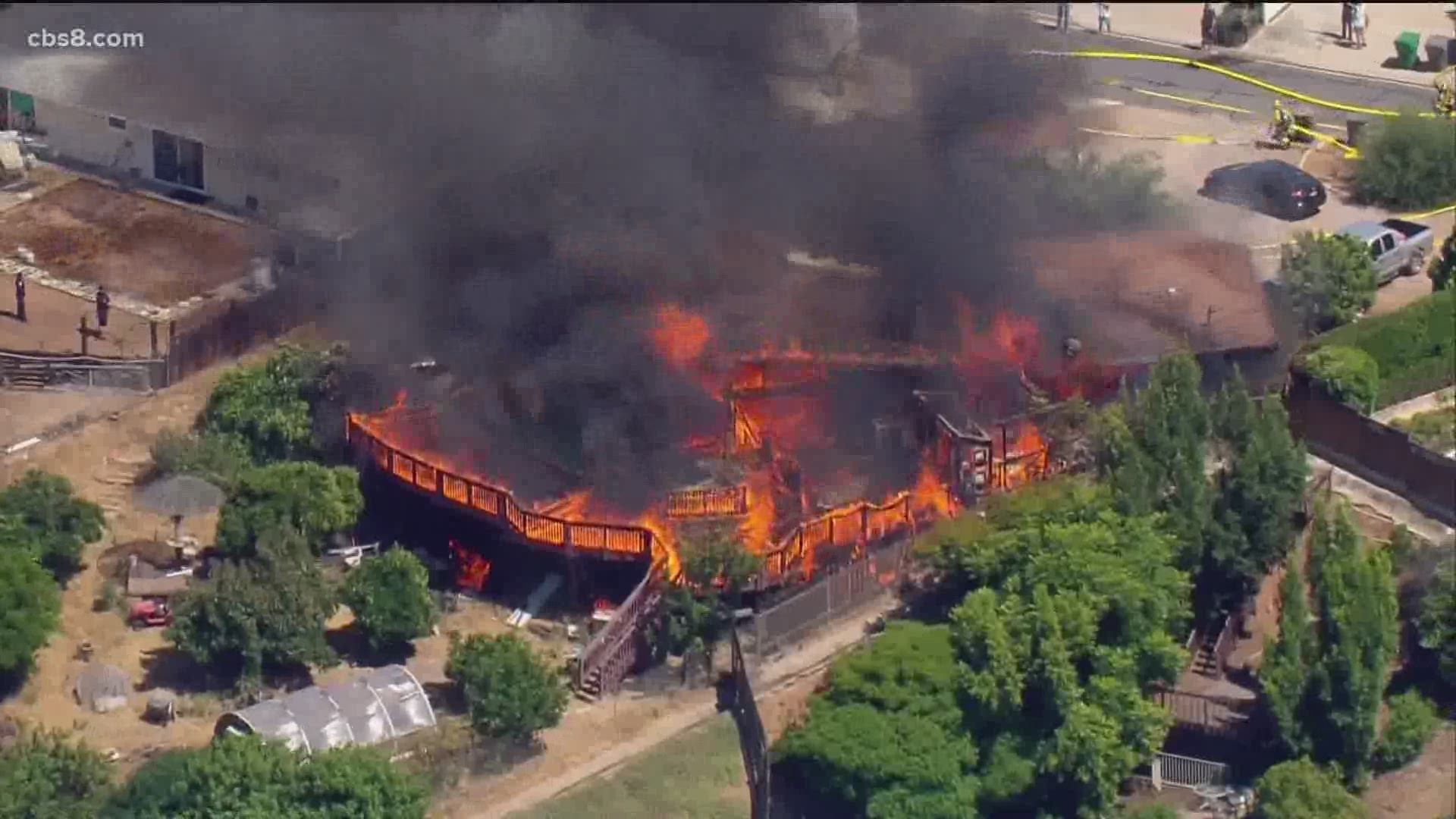 The flames, which began spreading through training areas at the Marine Corps base over the weekend, had charred roughly 8,600 acres by Wednesday afternoon, according to Camp Pendleton public affairs.

Several other fires broke out across San Diego County on Wednesday.

In Bostonia, an intense blaze gutted a large home in the 1600 block of Via Elisa Drive in an unincorporated area near El Cajon Wednesday afternoon, but no one was injured.

In Deer Springs, firefighters halted the spread of a small brush fire off
the 3400 block of Silverleaf Lane, according to Cal Fire.

In Santee, firefighters extinguished a fire that broke out in a ravine in the 9100 block of Carlton Hills Boulevard, just north of Mission Gorge Road and in Julian crews extinguished a roughly quarter-acre vegetation fire in the 1200 block of Oak Heights Road, according to Cal Fire.

RELATED: Cooler and cloudier going into the weekend

High temperatures Thursday are forecast to reach 80 degrees near the coast, 89 inland, 94 in the western valleys, 93 in the mountains and 108 in the deserts.

Highs in the western valleys will drop to the mid-70s to low-80s on Friday, while temperatures in coastal areas will max out in the low- to high- 70s, according to the NWS.

However, the relief will be short-lived because another ridge of high pressure is set to arrive early next week and cause temperatures to heat up again, forecasters said.

Temperature records for June 10 were set in El Cajon and at the Oceanside harbor on Wednesday, while Chula Vista tied its previous high for the date.

A new high was also reached at Oceanside harbor, where an 80-degree temperature beat the previous best for the date, 76 in 1966. Records date back to 1910. 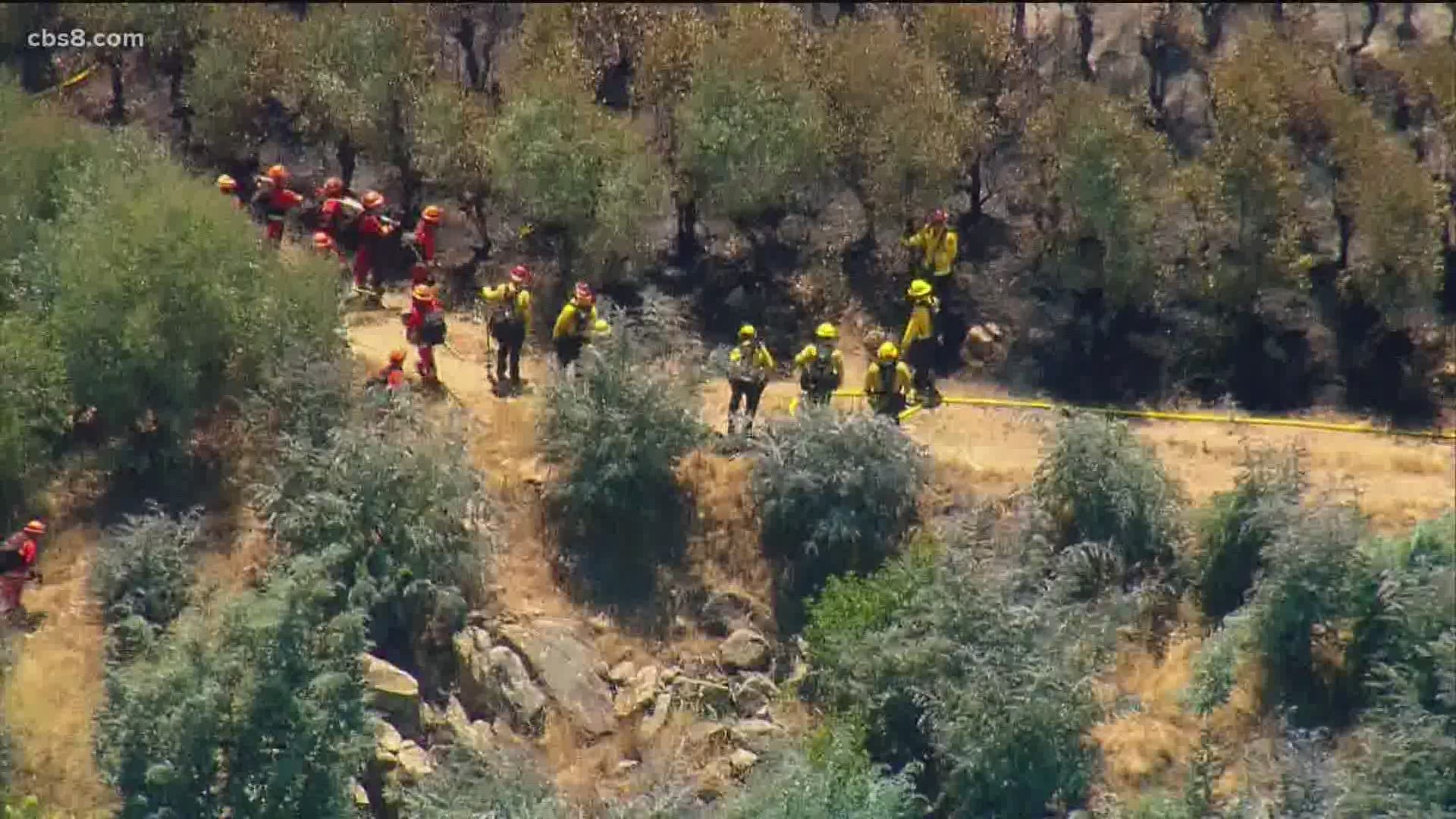