Aaron Russell, 23, is charged in the death of 36-year-old Nicholas Bils, who was unarmed and running away from officers when he was shot. 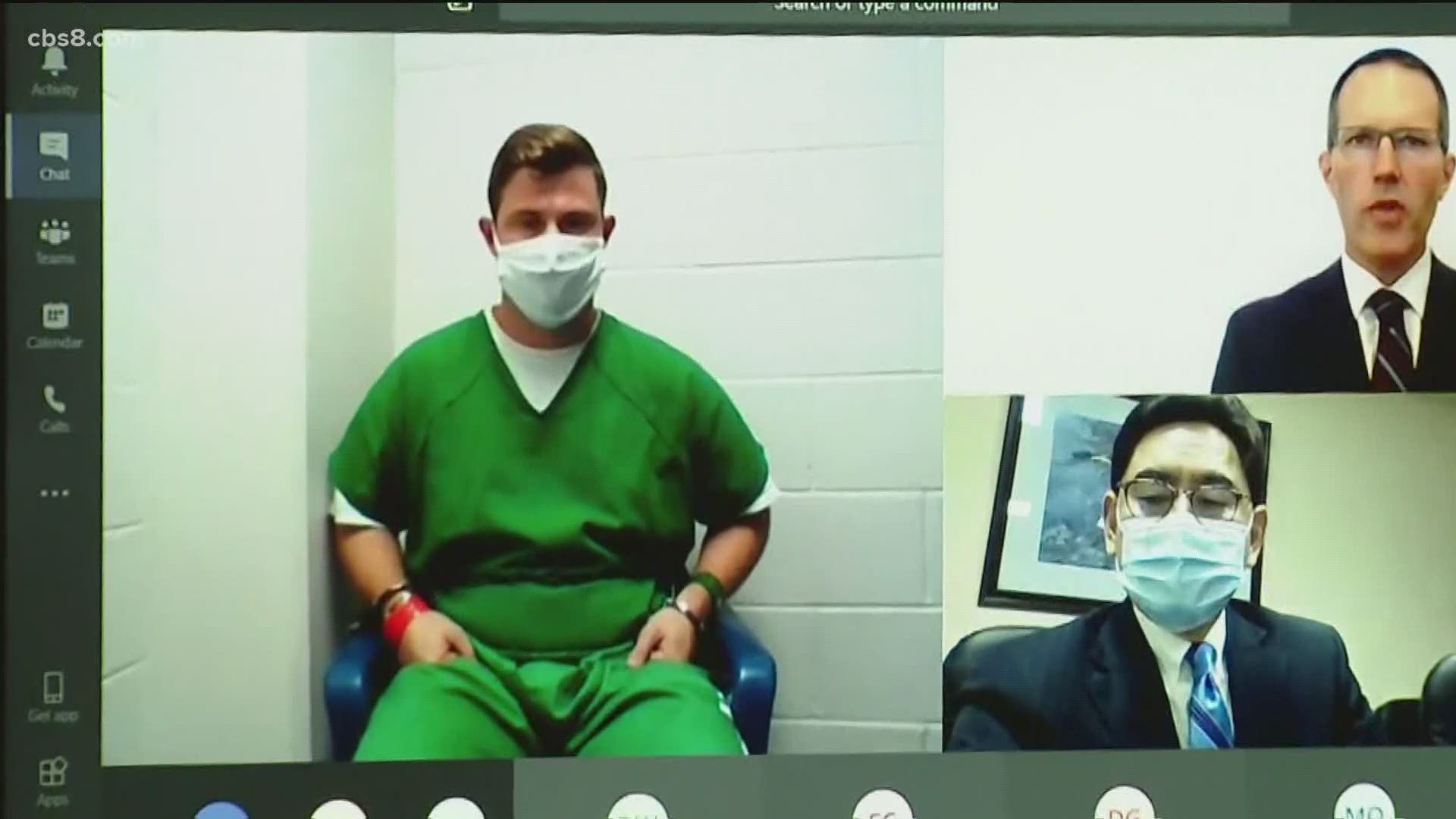 Aaron Russell, 23, is charged in the May 1 death of 36-year-old Nicholas Bils, who was unarmed and running away from officers when he was shot just outside the San Diego Central Jail, according to the San Diego County District Attorney's Office.

The former deputy, who had been with the department for 18 months at the time of the shooting, surrendered to authorities on Monday, according to his attorney, Richard Pinckard.

Russell, who resigned from the sheriff's department shortly after the shooting, faces 15 years to life in state prison if convicted of second-degree murder, and up to an additional 10 years if convicted of a firearm allegation.

Bils had been arrested by rangers with the California Department of Parks and Recreation for allegedly threatening a ranger with a golf club at Old Town San Diego State Park. He was being transported to the downtown detention facility when he managed to escape from a California State Park Officer's car, according to San Diego police.

The arrest warrant obtained by News 8 revealed new information. Russell and another deputy were headed to work at the jail when they saw Bils escape from the park ranger's car.

In Russell's left hand - he carried his lunch tote, water bottle, and COVID-19 mask -- his right hand reached downward toward his holstered firearm.

He chased after Bils on foot with his firearm pointing toward Bils and eventually fired.

Deputy District Attorney Stephen Marquardt said Russell fired five times as Bils was running away, striking him in the back, arm and thigh. The Bils' family attorney, Eugene Iredale, said the fatal shot went through Bils' back, lung and heart.

"It appears that [Russell] decided to use his gun rather than put down the thermos and his lunch, take out the taser, and shoot it," said Iredale.

According to the arrest warrant, after the shooting, Russell eventually did take out his taser and point it toward Bils who was lying on his back, not moving.

Among the officers present during the shooting, Russell was the only one who discharged his weapon, the prosecutor said. In fact, Marquardt said, "No other officer on scene so much as unholstered a firearm to stop Bils from running."

Iredale said Bils was at the park that day hitting golf balls for his dog to chase. He said "it appears that when the park rangers approached him," Bills "brandished his golf club and ran away."

Iredale alleged that Russell opened fire "with what appears to be calmness and relaxation" as he "began to take target practice on a man who was fleeing."

Exactly what prompted the deputy to open fire remains unclear. The DA's Office said there is surveillance footage of the shooting, but it will not be released to the public at this time as it is now evidence in a pending criminal case.

Marquardt said Russell was unjustified in shooting Bils under a recently enacted state law that changed the standard governing when law enforcement officers are justified in using deadly force. Since the beginning of this year, peace officers may only use deadly force "when necessary in defense of human life."

District Attorney Summer Stephan, in statement Monday, said her office "reached the decision to file criminal charges following a thorough review of all the objective facts and evidence in this case by specialized prosecutors and investigators in our Special Operations Division."

"When a life is taken, we must make decisions based in facts and law, and not ones that are influenced by the status of the accused as a peace officer nor the status of the victim," Stephan said. "These decisions must be made solely in the interest of justice and not based on favoritism nor public opinion. Every person must be accountable under the law."

The victim's mother, Kathleen Bils made a statement following Russell's arraignment, in which she said her son "should be alive and be here with us. But he's dead, and my heart cries out that this is not right."

She said the months since his death "have been agonizing for my sons, their families, and for me."

Bils' older brother, Benjamin Bils, said his sibling "was not a saint, (but) he was not a bad person."

He said his brother had run-ins with the police in the past, but "it did not mean he deserved to be shot in the back."

Russell was initially held on $1 million bail, but a judge cut the amount in half, agreeing with Russell's attorney that his client was not a flight risk or a danger to the community.

"He has based his entire life on the principles of honor and integrity," said Pinckard, who said law enforcement shootings "occur in tense, uncertain, rapidly evolving incidents, where decisions are literally being made in fractions of seconds."

Russell is due back in court July 24 for a status conference.

A copy of the former deputy's arrest warrant can be found below: