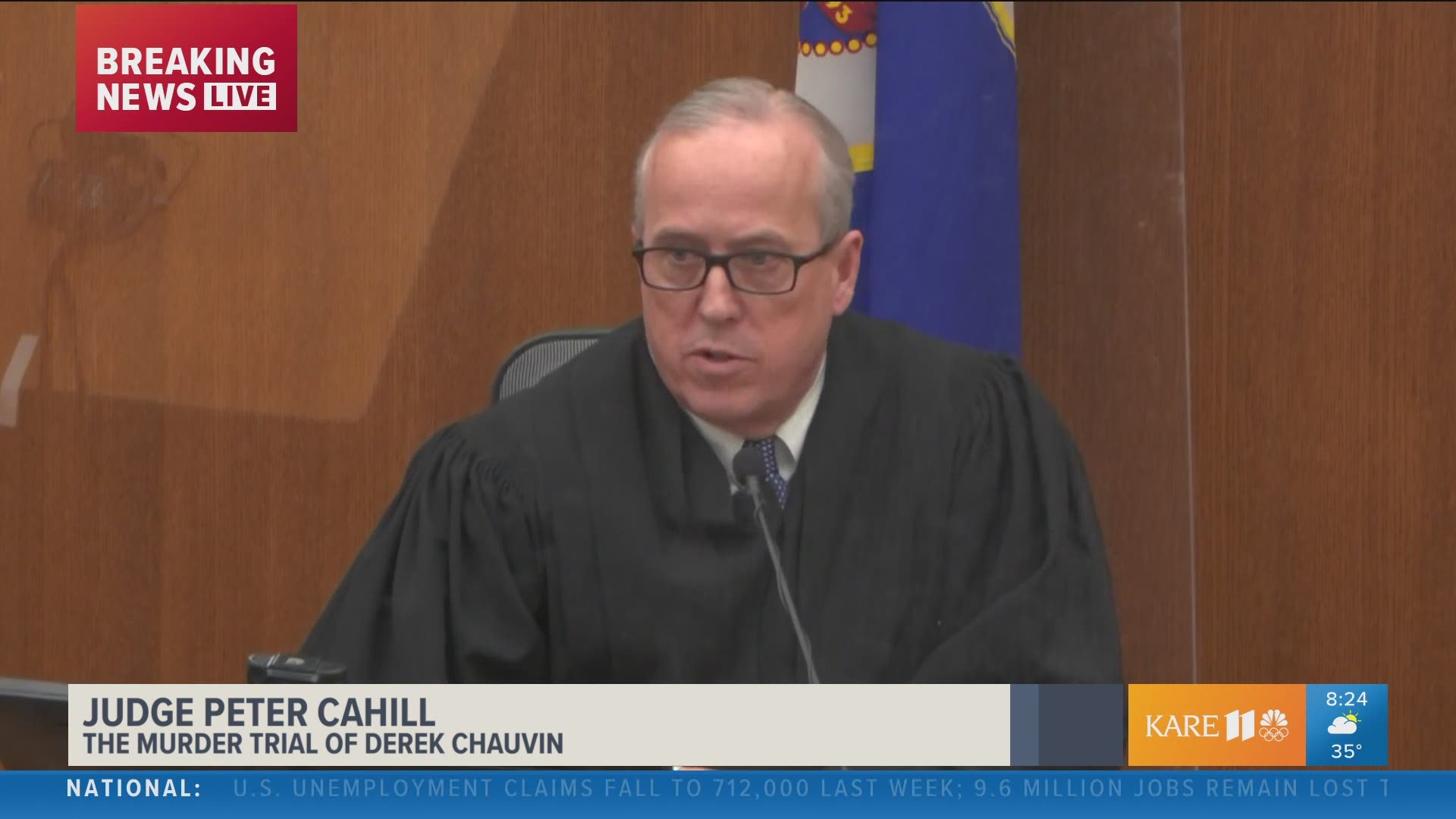 MINNEAPOLIS — Judge Peter Cahill has reinstated a third-degree murder charge against Derek Chauvin in the May 2020 death of George Floyd.

Chauvin was already charged with second-degree murder and second-degree manslaughter. Jury selection started Tuesday in the high-profile trial, which is being live-streamed across the globe.

Chauvin's defense team had earlier asked the judge to drop the charge for lack of probable cause, and he agreed. Then on March 5, the Minnesota Court of Appeals said that was an error, and that the charge should be reconsidered.

On Monday the defense asked the Minnesota Supreme Court to review that decision, but in a Wednesday afternoon denial the state's high court indicated it would not take up the issue. Judge Peter Cahill heard arguments on the matter Thursday morning before making his decision to reinstate charges.

In those arguments attorney Neal Katyal spoke first on behalf of the prosecution, saying, "It's a very straightforward decision. ... You have the absolute discretion to add this charge, and we think you should."

Eric Nelson, Chauvin's attorney, then presented his case. Nelson argued that this case is "factually and procedurally" different from the Mohamed Noor case, which the state Supreme Court is scheduled to review. In that case, another former Minneapolis police officer was convicted of third-degree murder in the shooting death of Justine Ruszczyk Damond. The court of appeals upheld that charge against Noor, and he then appealed to the Minnesota Supreme Court. The higher court will hear that appeal in June.

The Noor case addresses the question of whether third-degree murder can be used in an instance where the death-causing act is directed at a single person. Historically in Minnesota the charge has been used for a dangerous act that puts many people at risk, such as shooting into a crowd.

However, in its ruling last week the Minnesota Court of Appeals indicated that until the state Supreme Court rules on that matter, its previous ruling on third-degree murder stands: That it can be used against a single person.

Nelson argued that Noor's shooting across his partner's chest did in fact endanger more than one person, maintaining that case is different from the Chauvin case.

However, Cahill countered that the court of appeals specifically said in its ruling that the charge can apply when only one person is endangered.

"I'm not questioning the court of appeals this time," Cahill said.

That legal principle has now changed with the Court of Appeals ruling on Noor.

Katyal responded to Nelson's arguments. He said that while Judge Cahill is entitled to hear new arguments, he does not believe the court of appeals meant the previous issues should be re-debated.

"If there's good cause for some new argument that hasn't been made, OK, fine," he said. "I don't think anything today rises to that level."

Katyal said he does not agree that the Noor case is different from the Chauvin case because more people were endangered in the Noor case.

"Major points for creativity" to Nelson, Katyal said, but the court of appeals decision in Noor does not take into account the idea that his partner was endangered. Katyal read from the ruling, saying, "We therefore hold a conviction for third-degree murder ... may be sustained even if the death-causing act was directed at a single person."

After hearing all arguments, Cahill reinstated the third-degree murder charge. He clarified in the courtroom that when making his previous ruling to deny the charge, it was because he did not believe the decisions of the Minnesota Court of Appeals were precedential until they were final. That would mean until the state Supreme Court either denied review, or reviewed and upheld the decision.

Now that the Minnesota Court of Appeals has clarified that its decisions are precedential once filed, and the Minnesota Supreme Court has denied review of that ruling, Cahill said "I accept that now as a rule of law promulgated by the court of appeals."

"I feel bound by that and I feel that it would be an abuse of discretion not to follow that," Cahill said. He later added "I'm not that incorrigible that I would ignore the court of appeals and their pronouncements."

The judge noted that this decision only applies to Derek Chauvin, and not to the three former police officers charged in George Floyd's death. The prosecution has also requested to add third-degree murder to the charges facing Tou Thao, J. Alexander Kueng and Thomas Lane.

"This is not a decision for the other three defendants who are set for trial at a later date," Cahill said.

The defense did not appeal the judge's decision Thursday, so jury selection will move forward as scheduled.

"I on behalf of my client am comfortable with the decisions this court has made," Nelson said. "I am not seeking to restart the process."

The prosecution had previously asked that court proceedings be put on hold while the appeals were settled. Now that the charge has been reinstated, the prosecutors' request to the court of appeals for a "writ of prohibition" is moot.

George Floyd family attorney Ben Crump issued a statement in response to the Minnesota Supreme Court's decision not to review the third-degree murder charge, allowing Judge Cahill to make his ruling to reinstate it.

"We're gratified that the judge cleared the way for the trial to proceed and for Chauvin to face this additional charge," Crump wrote. "The trial is very painful and the family needs closure. We're pleased that all judicial avenues are being explored and that the trial will move forward."