Hansen is an EMT who called 911 after witnessing George Floyd's death. She told the court that she "pled" to give George Floyd medical attention. 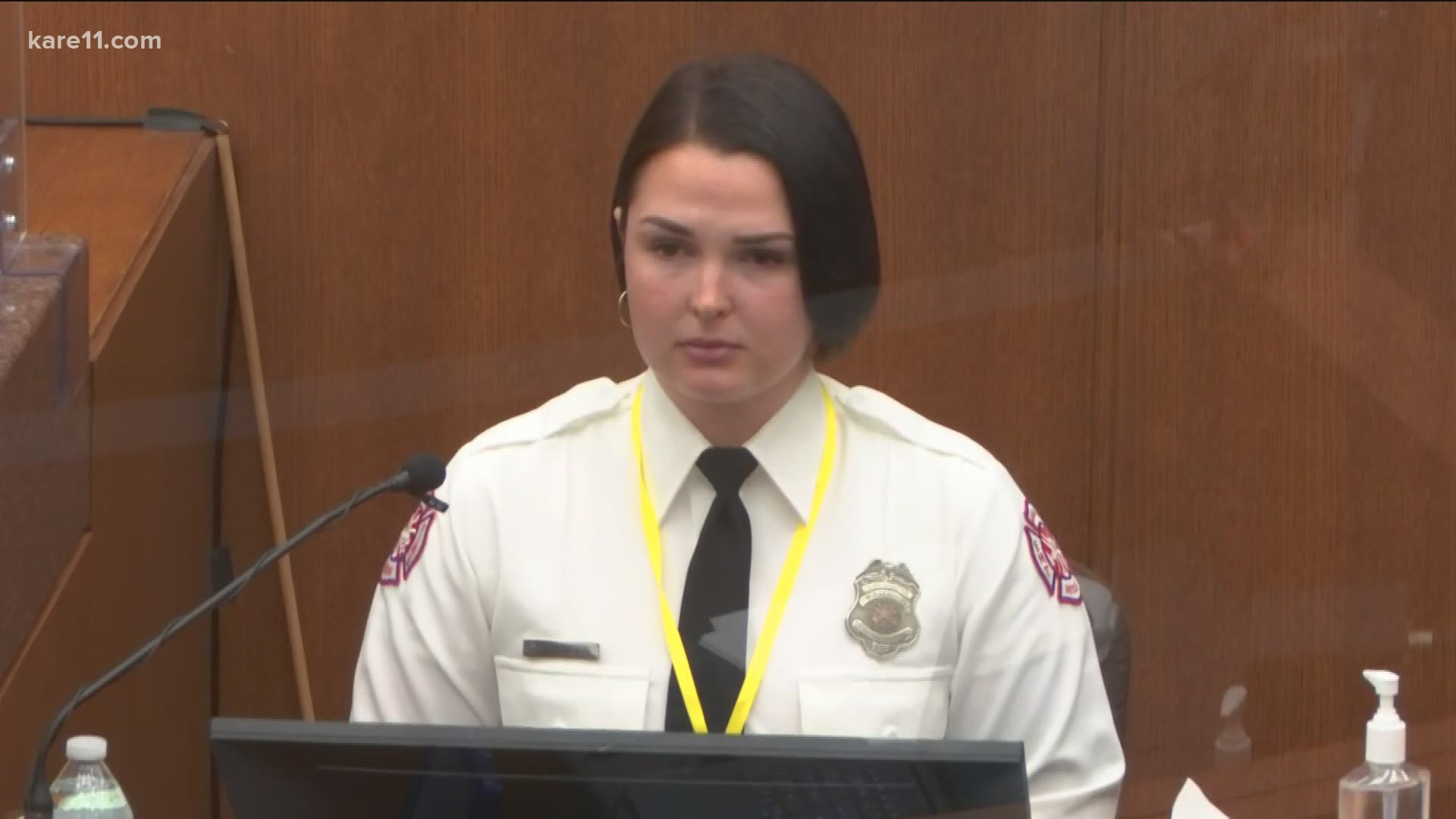 Hansen can be seen and heard in bystander video calling for police to check Floyd's pulse and give him medical attention. In her frantic 911 call, she told the operator that she "literally watched police officers not take a pulse and not do anything to save a man."

In her emotional testimony, Hansen told the court she could have given Floyd medical attention -- if the officers had let her.

"There was a man being killed," Hansen said. "I would have been able to provide medical attention to the best of my abilities. And this human was denied that right."

During direct examination by a prosecutor, Hansen said former MPD officer Tou Thao told her told her if she really was a first responder, she would "know better than to get involved."

"That's not right," Hansen said on the stand. She detailed the steps she would have taken: request more help, send someone to the nearby gas station for an AED, check Floyd's airway and pulse, and begin compressions.

Asked whether she was frustrated when officers wouldn't let her onto the scene and wouldn't give compressions themselves, Hansen began to cry.

"I tried different tactics of calm and reasoning, I tried to be assertive," she said. "I pled and was desperate."

Hansen, who recognized Chauvin's face from an earlier call but said she didn't know him, said he "seemed very comfortable with the majority of his weight balanced on top of Mr. Floyd's neck."

"He wasn't moving and he was cuffed," she said. "Three grown men putting their weigh on somebody is a lot, too much."

Like some earlier witnesses, Hansen's name began to trend on social media. Some watchers said they were struck by the reason she gave for ending her 911 call. She said she was unsure exactly why as there was so much going on, but it was either because other firefighters had arrived or because she was worried about the other eyewitnesses.

"I was still worried about the witnesses on scene," she said. "Particularly because they were people of color, Black men, and I was worried about their safety, and there were officers still on scene."

Hansen's exchanges with defense attorney Eric Nelson grew tense, and at one point Judge Peter Cahill sent the jury out of the room to admonish her. He said she cannot argue with the defense or with him, and that she needs to answer each question that's asked.

According to pool reporter - the jury left after Hansen said "I don’t know if you’ve every seen someone die in front of you, but it’s very upsetting.”

Then Judge Cahill admonished her.

Nelson's cross-examination of Hansen focused significantly on her emotions and demeanor at the scene. He asked about an insult she'd used toward the officers after Floyd's body was taken away.

"There was no point in trying to reason with them anymore because they had just killed somebody," she said.

Nelson asked Hansen if she would agree that her tone got more frustrated and upset as time progressed.

KARE 11 reporter Lou Raguse noted that such answers could help the prosecution counter the defense's focus on the "unruly crowd."

(important for prosecution for countering the "unruly crowd" angle from defense)

Nelson also questioned Hansen about her memories of Floyd's death, pointing out that she described him to law enforcement agents as a small, slim man. She answered that while she now knows he was not a small man, he appeared small because he was on the ground with the three officers on top of him.

Asked whether memories can be fallible, she agreed -- and said that's why "we're lucky" it was on video.

Nelson also pointed out that Hansen never showed the officers ID to prove she is a first responder. Hansen said she didn't have that ID with her at the time.

Nelson asked if Hansen would find it hard to do her job if someone was yelling at her, calling her names, or threatening her. She answered that she is confident in her training: "There's nothing anybody could say that could distract me."

Nelson also questioned Hansen about the things she didn't know at the scene -- she didn't know when police had called for medical responders, or what they were saying to each other. Hansen countered that a fire station was close by, and that she believes firefighters would be there earlier.

Nelson told her that a code three call went out for medical assistance five minutes before she arrived, and Hansen said she did not believe that.

"There was something wrong when requesting medical assistance," she said. "Because the fire, whether it's 17 or a different station, would have been able to respond to that call much sooner than medics were."

Hansen is trained in administering NARCAN, a drug used to treat opiate overdoses. Nelson asked if police often respond to drug overdoses because when the person is revived, they may become combative. Hansen said it does happen, but not often.

Raguse pointed out that Nelson may be laying foundation that the reason Chauvin didn't remove his knee is because he was worried that Floyd would revive and become combative.