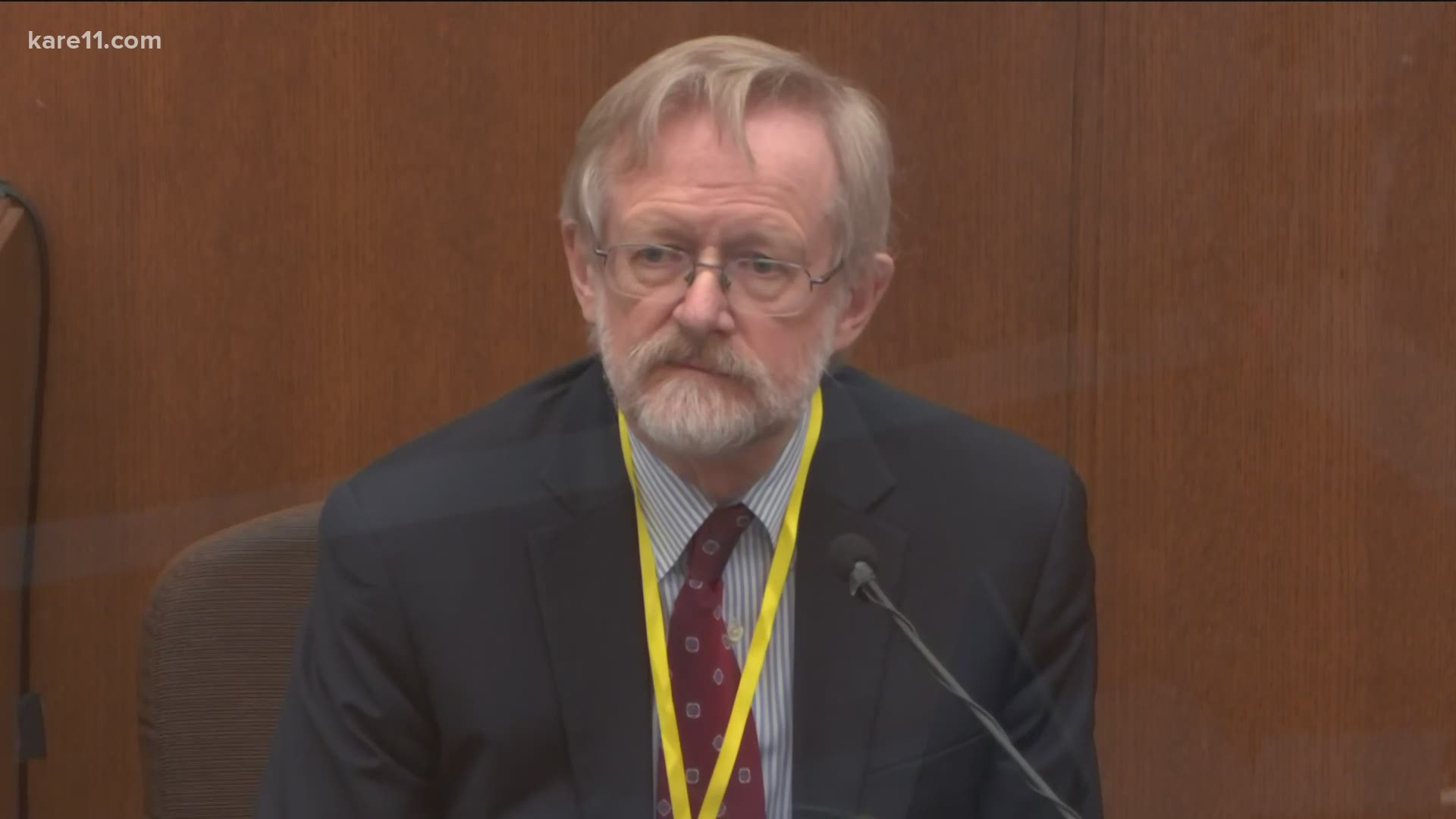 MINNEAPOLIS — A renowned medical expert who specializes in the lungs and breathing testified Thursday in the murder trial of former Minneapolis officer Derek Chauvin that he believes George Floyd died from low oxygen, caused by shallow breathing.

Dr. Martin Tobin, who was called to the stand by the prosecution, gave his medical opinion to the jury: "Mr. Floyd died from a low level of oxygen, and this caused damage to his brain that we see and it also caused a PEA arrhythmia that caused his heart to stop."

PEA, or pulseless electrical activity, is a particular form of an abnormal beat of the heart, Tobin explained.

"The cause of the low level of oxygen was shallow breathing, small breaths," he said.

During the state's line of questioning, Dr. Tobin used graphic recreations of the scene and mathematical equations to explain how the prone restraint, handcuffs behind the back and Chauvin's knee all worked together to deprive Floyd of oxygen.

Dr. Tobin, a Chicago-based physician specializing in pulmonology and critical care medicine, told the jury that he was not paid for his testimony, which is not the norm with expert witnesses.

"I thought I might have some knowledge that would be helpful to explain how Mr. Floyd died," he said.

Tobin has served as an expert witness in medical malpractice lawsuits, but never in a criminal case. Despite being in court roughly 50 times, he said that he did not "wish to be paid" because he's never testified in this type of case.

Tobin said he watched videos of Chauvin's restraint on Floyd hundreds of times.

He testified Thursday that Floyd was taking "shallow breaths that weren't able to carry the air through his lungs, down to the essential areas of the lungs that get oxygen into the blood and get rid of the carbon dioxide."

Floyd's left lung would have been completely useless given the pressure being put on his left side, Tobin told the jury. He showed a photo of Floyd's hand grasping at the street.

Tobin testified that the handcuffs are "extremely important" to the explanation of why Floyd couldn't breathe effectively.

"It's because of the positioning of the handcuffs at the back, then how he's manipulated with the handcuffs," he said. "They're pushing the handcuffs into his back and pushing him high."

A visual aid to go with what Dr. Tobin is saying regarding handcuffs -- and what officers are doing with the handcuffs. pic.twitter.com/VrpL3zDYZA

Tobin said the hard asphalt street that Floyd was being pushed into is also a factor.

Tobin said these factors "totally interfere with central features of how we breathe."

"Then in addition, because of the knee that was rammed into the left side of his chest," Floyd was unable to get any air into his left lung, Tobin said.

Tobin testified that the "knee that was rammed into the left side of his chest" had a similar effect, whether or not it was directly on the neck.

"The knee on the neck is extremely important" because it keeps air from getting into the passageway, Tobin said.

He noted that the hypopharynx, which is used for eating and breathing, is "vulnerable because it has no cartilage around it" and is "extremely small to breathe through." Tobin added that speech comes from a different part of the body.

He said if Chauvin's knee had been directly on the hypopharynx and never varied, Floyd could have had a heart attack or seizure within "seconds." This didn't happen, he explained, because both Chauvin and Floyd varied their movement.

The prosecutor showed the jury a photo that shows Chauvin's knee on Floyd's neck, with his toe lifted up above the ground.

"This means that all of his body weight is being directed down at Mr. Floyd's neck," Tobin said.

"We know that his oxygen levels were enough to keep his brain alive, and the reason we know that is that he continued to speak over that time," Tobin said. "We know that he made various vocal sounds for four minutes and 51 seconds."

Tobin testified that the idea that if you can speak, you can breath is "a very dangerous mantra."

He also told the jury he believes he can identify the exact moment Floyd died, as prosecutors played a video clip of him pinned under Chauvin.

"You can see his eyes, he's conscious, and then you see that he isn't," Tobin said. "That's the moment the life goes out of his body."