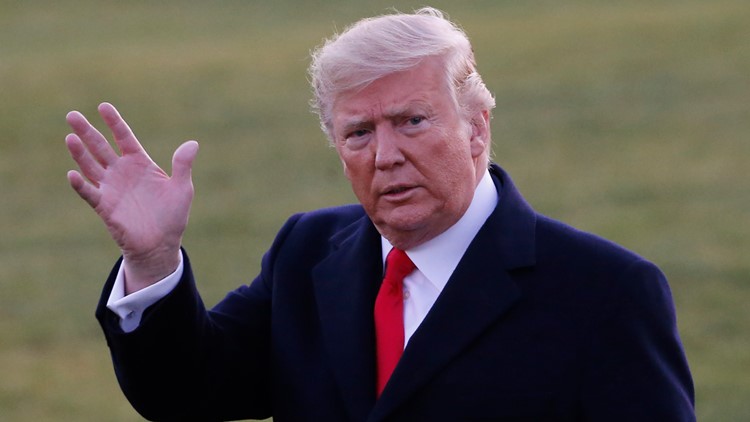 Photo by: AP
President Donald Trump leaves the White House for a campaign trip to Battle Creek, Mich., Wednesday, Dec. 18, 2019 in Washington. President Donald Trump is on the cusp of being impeached by the House, with a historic debate set Wednesday on charges that he abused his power and obstructed Congress ahead of votes that will leave a defining mark on his tenure at the White House.(AP Photo/Steve Helber)

SAN DIEGO — The U.S. House of Representatives, in a historic move, voted to impeach President Donald Trump on Wednesday.

House Speaker Nancy Pelosi kicked off the six hours of debate before the voting shortly after 9 a.m. PST.

The vote makes Trump the third commander in chief to face the penalty of impeachment after Andrew Johnson and Bill Clinton. The vote came one day shy of the 21st anniversary of the impeachment of Bill Clinton. Richard Nixon resigned before the House could vote.

Four representatives from the San Diego are among who voted in favor of impeachment.

Here is what each of them had said about the articles of impeachment against Trump and their vote ahead of Wednesday:

Last week, on Dec. 10, Davis tweeted a set of tweets saying the president put “his political and personal priorities before our national security” and said the House had no choice but to send the matter on to the Senate.

On Wednesday, Levin released a one-minute video on Facebook explaining the reasons for his vote in favor of impeachment. The post accompanying the video read: “No one is above the law, not even the President. That is why I support both Articles of Impeachment.”

In a chain of tweets on Wednesday, Peters said he would vote to impeach Trump in order to “defend the Constitution from all enemies, foreign and domestic.” He ridiculed some House Republicans for their support of the president saying they did not seek to find the truth.

Vargas called himself one of the first members of Congress to support the inquiry in a tweet Tuesday night indicating he will vote in favor of impeachment.

Following his plea, the U.S House Committee on Ethics wrote a letter to urging Hunter to not cast any votes. While it was not a mandatory order, Hunter has not cast any votes in the House since Dec. 4. He has said he will resign from his position after the holidays.