In a video circulating online, a man is seen hitting a black protester and longtime Imperial Beach resident in the back of the head, according to IB officials. 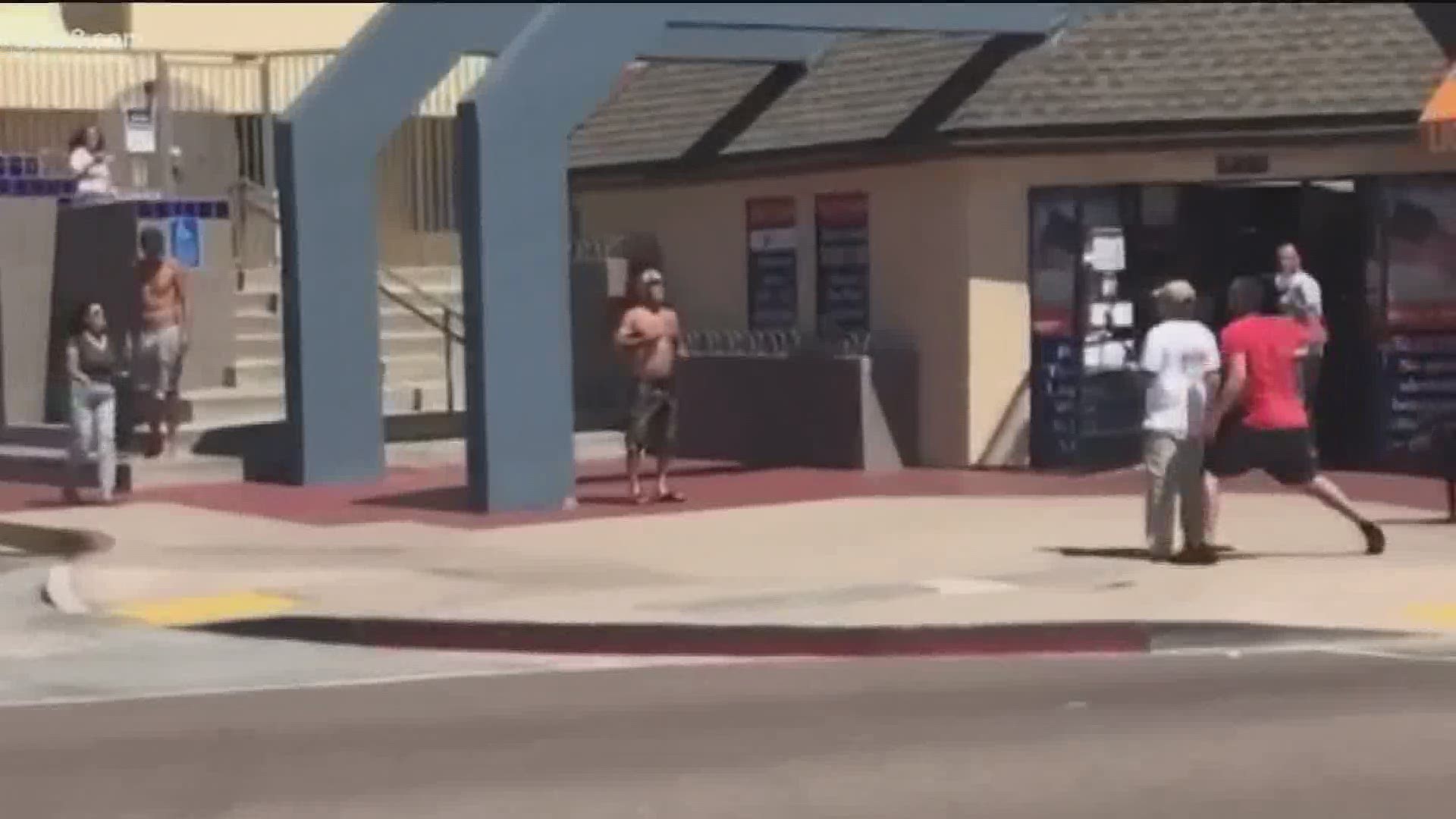 IMPERIAL BEACH, Calif. — Content warning: The video in this story depicts a violent act and may not be suitable for all viewers.

Imperial Beach Mayor Serge Dedina and Mayor Pro Tem Paloma Aguirre have called for the San Diego Sheriff's Department to investigate the attack on a peaceful protester Sunday and deem the incident a hate crime.

The Imperial Beach protest was one of many demonstrations throughout San Diego County on Sunday which opposed racism, inequality within the justice system and police brutality against people of color.

"When I first got hit, I didn’t know what hit me and as I ducked and turned around to assess what was going on I saw I was under under attack," said Marcus Boyd.

Boyd, a police reform activist, says he was sucker punched by a counter-protester and has watched the cellphone video of the assault over and over.

"I can’t watch the video anymore, it makes my head hurt each time I look at it," said Boyd.

San Diego County sheriff's investigators say the incident occurred Sunday afternoon across from the Imperial Beach Pier Plaza during a peaceful protest. They says there was a verbal argument and the victim was punched by a man. The suspect and two other men ran off.

In a video posted online a man in a red shirt is seen coming up behind and punching a man who was protesting in the back of the head. The man who threw the punch is then seen running away from the area as the man who was hit loses his balances and falls into the street. Boyd says he was knocked to the ground and broke his glasses.

Boyd is am Imperial Beach resident and business owner for 17 years and has called for police reform for decades.

"The video doesn’t explain what the takeaway is but my takeaway for back to the origin of the protest which is police reform which is George Floyd, it’s Breonna Taylor. It’s the people that have died by the hand of someone who is supposed to protect and serve," said Boyd. "I hope everyone can find compassion out of it, not hate or anger I’m not going to say I’m not mad at that guy cause I am, but I don't hate everyone." said Boyd.

Mayor Pro Tem Paloma Aguirre said the man who attacked Boyd was part of a group of three to four individuals who were reportedly harassing peaceful protesters.

"Imperial Beach has a decades-long history of racism and white supremacy," Aguirre said.

Aguirre also said she herself as a Mexican-American was the subject of harassment, libel, slander and threats against her life when she was running for office in 2018 with someone texting her a threat using a racial slur. She said while the incident Sunday was sad, it does not surprise her given Imperial Beach's history.

Aguirre said Sunday's protest was canceled then re-organized multiple times due to harassment the organizers were receiving. She also said she was proud of the organizers for choosing to go forward with the peaceful protest and exercise their First Amendment right.

"I want them to know - and everybody to know - that the City of Imperial Beach stands in solidarity with Black Lives [Matter]. We stand behind anyone who's willing to speak out and uplift the voices of black lives in Imperial Beach," Aguirre said. "And that they should be able to do so in a peaceful and safe way."

In another video of the incident taken from a different angle, other protesters seem to chase the man who threw the punch while others go to the aid of the Boyd.

"We cannot allow the ugly legacy of violent racism and white supremacy to continue in our beach city," Mayor Dedina wrote on Twitter.

Boyd says he declined medical treatment at the scene but on Monday said his head hurt and had blurry vision.

"On June 7th just before 3:00 p.m., deputies from the Imperial Beach Sheriff's Substation responded to the 900 block of Seacoast Drive to investigate a report of an assault. A man who had attended a peaceful demonstration in the area, told deputies he was punched by another man after a verbal confrontation. The suspect ran away with two other men. The victim was not seriously hurt and did not require medical treatment. Deputies located the suspect but could not be identified by the victim or other witnesses.  The investigation is still continuing.  No arrests have been made and the investigation is continuing. Anyone with information regarding this incident or may have captured the incident on video is urged to call the Sheriff's Department at (858) 565-5200."

Marcus Boyd, a civil rights and police reform black activist was sucker punched by counter protesters while protesting during a peaceful demonstration on Sunday in Imperial Beach. City leaders are calling for a hate crime investigation. If you have any information call Sheriff's at 858-565-5200