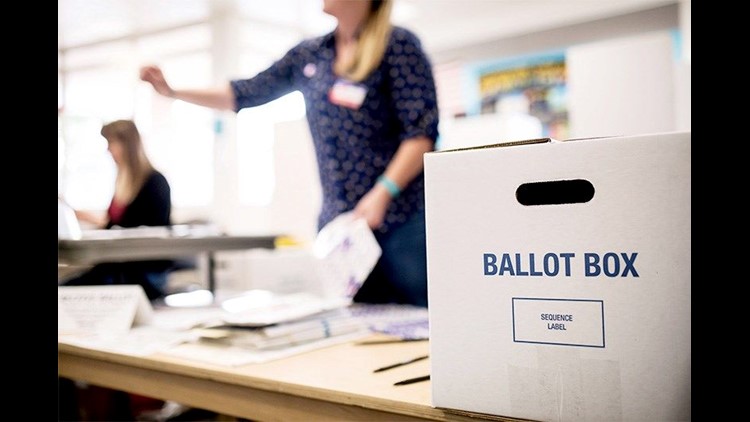 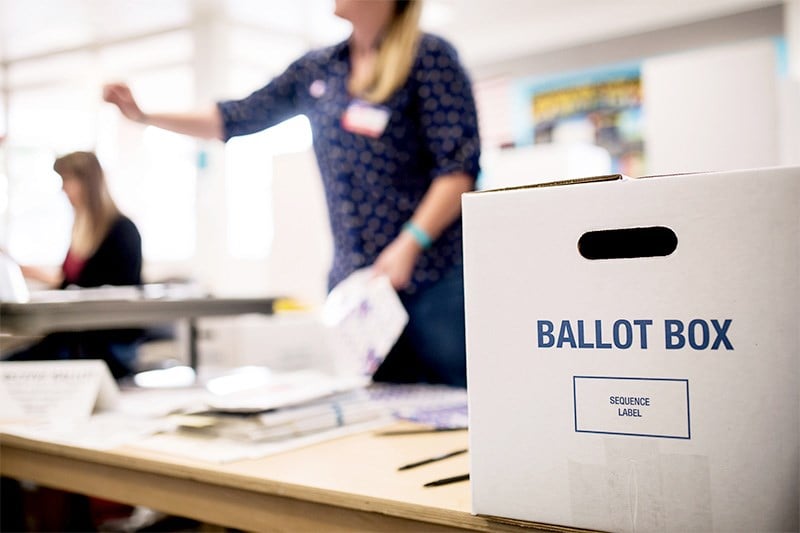 A poll worker at the North Park Library is shown handing out stickers to voters on June 5, 2018. (Megan Wood/inewsource)

This is the third of a five-part Follow The Money series by inewsource reporters Jill Castellano and Brad Racino, leading up to the Nov. 6 election. In this installment, they look at Measure D, a ballot measure that would require elections for county offices to be decided in November. This would be a significant change in county politics.

The first two parts of this campaign money series were on Proposition 6, which would repeal a state gas tax increase, and on the SoccerCity and SDSU West stadium measures. The other topics that will be covered this week are a San Diego Unified School District bond proposal and a San Diego government transparency measure.

Each of the Follow The Money stories will air on KPBS radio and TV and are available as inewsource podcasts on iTunes. Below is the radio transcript, which has been edited for clarity.

Brad: And I'm Brad Racino. This is the third episode of our weeklong series diving into the money behind some of the major initiatives on the November ballot.

Jill: Today we're talking about Proposition D, which would move all races for county offices to November.

Brad: We'll give you a rundown of what this is about, and then we'll jump into the money behind it.

Jill: This'll be a good one.

Brad: They're all good ones.

Jill, explain what this ballot measure is and how it affects county elections.

Jill: Right now, if someone is running for county office and they get more than 50 percent of the vote in the June primary election, they win. It's over. Done. Prop. D would force all county races to go to the general election, no matter what.

Brad: When you say county office, you mean the county Board of Supervisors?

Jill: Yes, but there are other county positions, too, like sheriff, district attorney and assessor. These three races were all decided in June this year.

Brad: So this sounds kind of familiar.

Jill: Yes. The city of San Diego passed the same kind of measure in 2016, but that's only for city races.

Brad: OK. Why do people want to move county elections to November?

Jill: We talked to Kyra Greene from the liberal-leaning Center on Policy Initiatives about that. She's supporting Measure D. Here's what she said: "Primaries are times where we have an underrepresentation of young people, people of color and low-income folks. So it's not as a representative time as the November elections."

Brad: So it's good for Democrats, right? A bigger share of Democrats vote in the general election.

Jill: That's true. It's why some Republicans argue this ballot measure is just an attempt to get more Democrats in office. But at the same time, some Democrats argue the opponents of this measure are just trying to keep Republicans in office.

Brad: Who are these opponents?

Jill: There's no official opposition campaign, but there were a couple attempts to keep Prop. D off the ballot. The county tried to push the measure to the 2020 ballot, with the help of the Board of Supervisors.

Brad: Who are all Republicans.

Jill: And Tony Krvaric, chairman of the county Republican Party, filed a lawsuit. Both attempts failed. But here's Krvaric: "What Measure D does is it increases the cost of running campaigns and makes it even less accessible for the average person to run for office."

His point is that candidates need to raise more money if they are going to have to run in both the primary and general elections, which could make it hard if you don't have a lot of big, wealthy donors to back you.

Brad: You said the magic word.

Jill: The committee has raised about $720,000. Some of the donors are Democratic politicians including Assemblywoman Lorena Gonzalez Fletcher and Councilwoman Barbara Bry. But the biggest donor is the local chapter of the Service Employees International Union. They've given more than a third of the money the campaign has, or about $266,000.

Brad: SEIU is the largest union for county government workers.

Jill: And the other big donors are also unions. United Domestic Workers and the San Diego Building and Trades Council each donated $50,000.

Brad: Wait, so if the ballot measure passes, more Democrats could be voting in our county elections.

Jill: Yep, and labor unions give a lot of money to Democrats in San Diego County. SEIU has given almost $50,000 to the Democratic Party this year. It hasn't given any money to the Republican Party.

Brad: Speaking of the Republican Party, what does Krvaric say about all this?

Jill: He says the labor unions are funding Measure D to get more Democrats in office, because Democrats will support policies that benefit labor unions.

Brad: I'm guessing the supporters of the proposition aren't buying this.

Jill: Not at all. They say we should have as many people voting as possible. If it means more Democrats wind up in office, that's because people want more Democrats in office.

Brad: While you're thinking about who you want to vote into office this November, you can visit inewsource .org or find us on iTunes to learn more about Proposition D and the other ballot measures we're talking about this week.