Follow The Money: The campaigns for and against SoccerCity and SDSU West

This is the second of a five-part Follow The Money series by inewsource reporters Jill Castellano and Brad Racino, leading up to the Nov. 6 election. In this installment, they look at the two ballo...

Follow The Money: The campaigns for and against SoccerCity and SDSU West
Author: cbs8.com
Published: 9:55 AM PDT October 9, 2018

The former Qualcomm Stadium in Mission Valley is shown on May 15, 2018, from the trolley line that passes through the 166-acre site. (Megan Wood/inewsource)

This is the second of a five-part Follow The Money series by inewsource reporters Jill Castellano and Brad Racino, leading up to the Nov. 6 election. In this installment, they look at the two ballot measures that propose to redevelop the former Qualcomm Stadium site in Mission Valley. Measure E is the SoccerCity proposal. Measure G is the SDSU West proposal.

On Monday, the series launched with a look at the money on both sides of Proposition 6, which would repeal a state gas tax increase. The other topics that will be covered this week are requiring all county elections to be decided in November; the San Diego Unified School District bond proposal; and a San Diego government transparency measure.

Each of the Follow The Money stories will air on KPBS radio and TV and are available as inewsource podcasts on iTunes. Below is the radio transcript, which has been edited for clarity.

Jill: And I'm Jill Castellano. This is the second episode of our series where we dig into the money behind the major ballot measures to be decided in the November election.

Jill: We'll explain each one.

Brad: Then, Jill will tell you about the people funding these ballot measures. Who's paying for those TV commercials, fliers and radio ads.

Jill: We have got a ton to cover. Lots of people, and lots of money.

Brad: … the city was left with 166 acres of prime real estate in Mission Valley that's a huge money suck for the city.

Jill: Taxpayers are still paying down $31.6 million in stadium debt through 2027. Now, the groups behind both measures say their proposal is going to be better for San Diego.

Jill: That's Measure G. It would turn the land into a western campus for San Diego State University. That includes new administrative buildings, a river park, some low-income housing and a new stadium for the school's football team.

Brad: And why does SDSU want this land?

"This initiative gives San Diego State land upon which they can grow. And when that occurs, that is going to educate our population and increase our economy because it's going to produce better jobs, higher incomes, more businesses."

Like SDSU West, the SoccerCity plan includes a river park, retail and housing units. But its big selling point is a soccer stadium for a major league team. And the SoccerCity developers say they would buy the stadium site without using taxpayer money.

Brad: But there's no guarantee a team will come here.

Jill: Right. Here's Michael Stone, one of the biggest pro-SoccerCity voices: "But our true north in this remains the delivery of a compelling combination of economic tax benefits to the city, a long sought after river park, and creating sports and entertainment-related assets for the city we all call home." 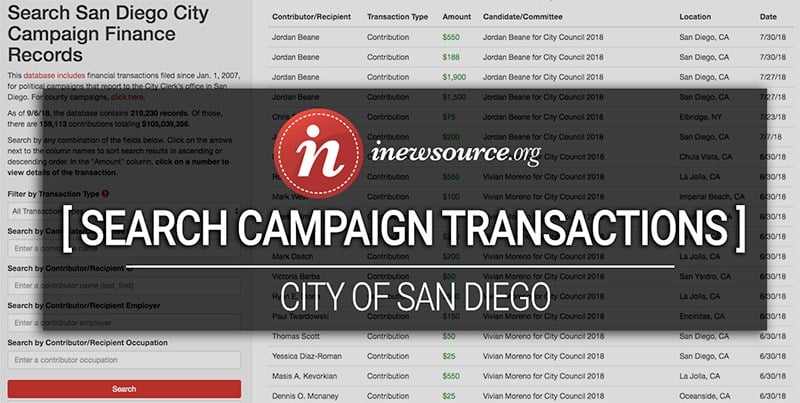 Brad: So who are these people backing these competing campaigns?

Jill: This is the part where we talk about the money.

The biggest funders of the SoccerCity measure are with FS Investors, a private investment company. Michael Stone, the president, has donated almost $3 million, and Nick Stone, a partner at FS Investors, has donated more than $250,000.

Brad: Are the Stones related?

Brad: Are they the Stone Brewing beer guys?

Jill: But they've donated more than 40 percent of all the $7.4 million that the SoccerCity campaign has raised. So Measure E's funding is coming from a few, wealthy donors.

Brad: OK. What about SDSU West?

Jill: That campaign has raised $2.4 million. Its biggest donors include former San Diego City Manager Jack McGrory and Fred Luddy, a billionaire who runs a software company. They each gave at least $150,000.

Brad: It sounds like the donors to SDSU West aren't giving as much money as the SoccerCity donors are.

Jill: Yeah, but there are more of them. A lot of them have local business interests or are developers, like Evans Hotels and Corky McMillin CEO Mark McMillin.

And there's a third campaign.

Jill: Yes! This is a campaign specifically opposing the SoccerCity plan. It's funded by two big housing developers that own land in Mission Valley: H.G. Fenton and Sudberry Properties. They've raised $4 million.

Brad: To be transparent, SDSU West supporters McGrory and Evans Hotels support both inewsource and KPBS. Thomas Sudberry is also an inewsource supporter.

Jill: If you want to know more about these or any of the propositions we're talking about this week, go to inewsource.org or find these episodes on iTunes .

Brad: Catch us Wednesday when we talk about a ballot measure that could dramatically change county elections.