Follow The Money: The campaigns for and against the Gas Tax Repeal

This is the first of a five-part Follow The Money series on key ballot measures by inewsource reporters Jill Castellano and Brad Racino. In this episode, the two reporters look at the money on both...

Follow The Money: The campaigns for and against the Gas Tax Repeal
Author: cbs8.com
Published: 11:16 AM PDT October 8, 2018

A car is shown at a gas station near the San Diego State University campus on Sept. 5, 2018. (Megan Wood/inewsource)

This is the first of a five-part Follow The Money series on key ballot measures by inewsource reporters Jill Castellano and Brad Racino. In this episode, the two reporters look at the money on both sides of Proposition 6, which would repeal a 12-cent state gas tax increase and a new vehicle registration fee.

To listen, read or watch the first episode, go to inewsource.org .

The other topics Jill and Brad will cover this week are SoccerCity/SDSU West; requiring all county elections to be decided in November; the San Diego Unified School District bond proposal; and a San Diego government transparency measure.

Each of the Follow The Money stories are also available as inewsource podcasts on iTunes .

Below is the radio transcript, which has been edited for clarity.

Jill: And I'm Jill Castellano. This episode is the first installment in inewsource's weeklong series diving into the money behind major initiatives on the November ballot.

Brad: Today we're talking about Proposition 6, a ballot measure that could reduce our gas taxes. We'll do a brief overview of what Prop. 6 is all about.

Brad: And then Jill is going to do what she's so good at - following the money behind the people and powers supporting and opposing this measure.

Jill: I'm really excited about this one.

Brad: Jill, you've spent quite a bit of time looking into the gas tax repeal. For people who know absolutely nothing about it, give us a rundown.

Jill: Last year, California lawmakers passed Senate Bill 1. That law raised the price of gas by 12 cents a gallon and added a new vehicle registration fee. And that money is supposed to be used to fund transportation projects.

Prop. 6 is an attempt to undo SB 1. It actually started in San Diego with Carl DeMaio, the former San Diego city councilman who now has his own conservative radio talk show. He's been rallying his listeners behind the gas tax repeal for over a year now.

We caught up with him in August. Here's what DeMaio said: "It's a very regressive tax. It's unfair to working families, hits them pretty hard and it comes at a time when politicians have shown that we can't trust them to fix our roads. They always divert and raid the funds." 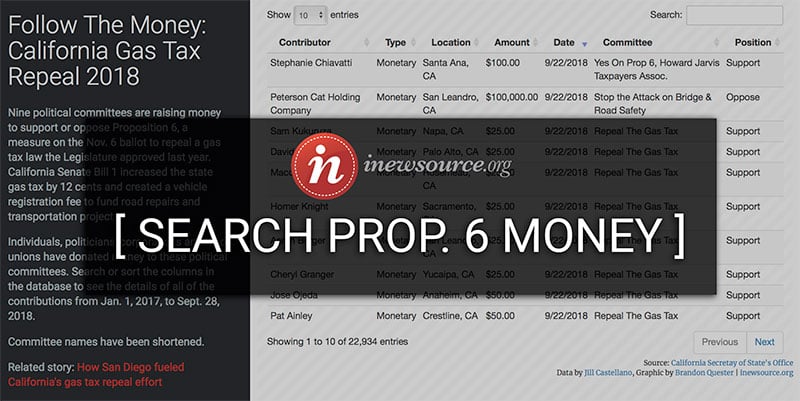 Brad: OK. What's the side that wants the 12-cent increase have to say?

Jill: They're arguing that the money's needed for road repair and transportation projects and, in the long run, that's good for working families. Also, San Diego has already gotten $1 billion in transportation funding from the tax, which disappears if Prop. 6 passes.

We interviewed state Assemblyman Todd Gloria about this in August. Here's what he said: "If Proposition 6 passes and SB 1 is repealed, you will see an elimination of $5 billion worth of annual improvements across the state of California. Think about what that means locally here in San Diego."

Brad: So how did this repeal campaign go from a radio talk show to a statewide ballot measure?

Jill: I can tell you by talking about the money behind Prop 6.

So DeMaio organized thousands of volunteers to collect signatures and raise money to get this on the ballot. And it worked. More than a fifth of the almost 1 million signatures to get Prop. 6 on the ballot came from San Diego.

Brad: So, Yes on 6 is a grassroots campaign.

Brad: Is that unusual?

Jill: Very unusual for a ballot measure. More than 25,000 people have donated to DeMaio's repeal campaign, and a third of them donated $100 or less. But the campaign is getting help from some big names, too.

Jill: Like some of the most high-profile Republican candidates running for office this year in California. There's John Cox.

Brad: She's running for a competitive congressional seat in a district covering parts of San Diego and Orange counties.

Brad: But DeMaio's group isn't the only committee.

Jill: Right. His is one of four political committees around the state funding Prop. 6, and together they've raised more than $5 million.

Brad: And what about the groups who like the gas tax? How much money do they have?

Jill: There are five groups opposing Prop. 6, and they've raised way more money than the supporters have. We're talking $32 million. So they have a huge advantage.

Brad: Where's their money coming from?

Jill: It's mostly coming from labor unions and corporations. A lot of construction companies. In fact, we've seen 11 of these groups donate $1 million or more each to oppose Prop. 6.

Brad: To find out more about Prop. 6 - or any of the propositions we'll be discussing this week - head to inewsource.org or find these episodes on iTunes. And catch us Tuesday, when we talk about SoccerCity and SDSU West, the plans to redevelop the former Qualcomm Stadium site.