The state Department of Corrections and Rehabilitation banned in-person visits at all fire camps and prisons when the COVID-19 pandemic began about 16 months ago. 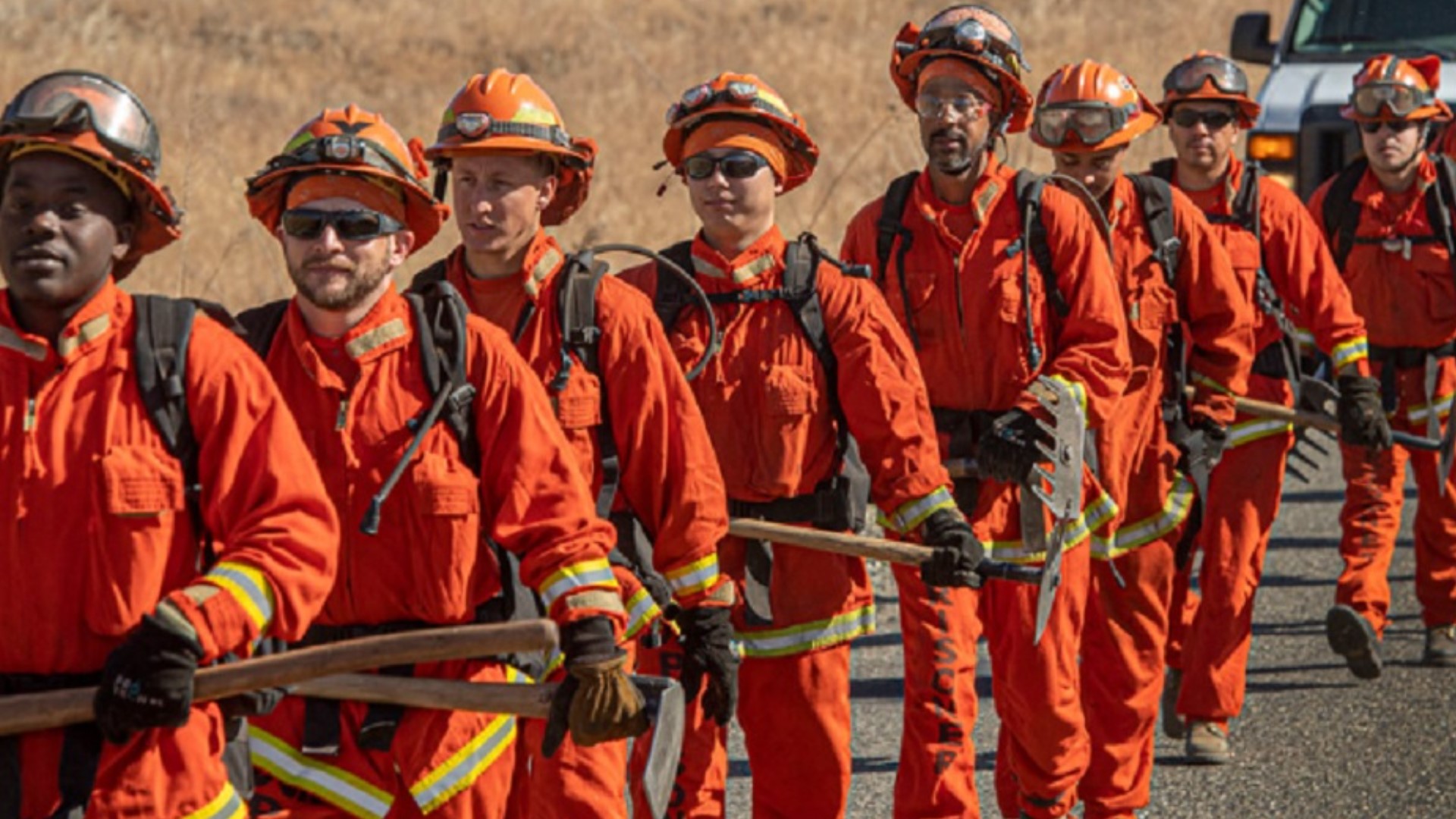 CALIFORNIA, USA — Hundreds of California inmates will charge to the front lines of rapidly spreading wildfires this summer, risking injury and death in exchange for shorter sentences and a few dollars a day.

When the flames recede, they will return to their living quarters at one of 35 low security camps, where picnic tables and barbecues once bustled with families — a perk that higher security prisons don’t allow.

Now, the inmates have the grounds to themselves.

The state Department of Corrections and Rehabilitation banned in-person visits at all fire camps and prisons when the COVID-19 pandemic began about 16 months ago. As infection rates slowed in March and April this year, prisons opened their doors again. But at the camps, inmates and their families are still waiting for in-person visits to restart.

Asked by inewsource about the ongoing ban, prison officials said they are working through logistical challenges and are in the “final stages” of developing medical and safety protocols for in-person visiting. They wouldn’t explain why it has taken this many months to reinstate outdoor visits, which pose a low risk of spreading the COVID-19 virus, or provide a timeline for when visits would resume.

“California is entering its peak fire season and (the department’s) evaluation includes operational issues, including campers being called to respond to a fire on short notice,” corrections department spokesperson Terri Hardy said in an email.

The families of three inmate firefighters said they have watched optimistically in recent months as state officials lifted COVID-19 restrictions at nursing homes, restaurants and other establishments, hoping the same would soon happen at fire camps. The visitation policy has lowered morale at the camps, they said, and deprived their loved ones of much needed human connection.

Some families have tried contacting the corrections department, searching for an explanation and hopeful a solution may be coming soon, with little success.

Seanan Payne, a west Los Angeles resident whose husband is working at a fire camp in Sequoia National Forest, said she would follow any social distancing, masking, testing and vaccination rules that would allow her to visit the grounds — the same kinds of rules in place at her hospital job.

“That should be sufficient,” she said. “It is sufficient for the rest of the world.”

As the visitation ban continues, the fire camp program faces a shortage of more than 1,700 participants, partially a result of early prison releases during the pandemic. As of May, there are 1,600 inmates working at the camps, and of those, roughly 900 are fire line qualified, while the others serve as support staff.

To boost enrollment, the state now allows eligible prisoners to join the program if they have up to eight years left on their sentences instead of just five, which should add another 500 recruits in the next year.

The shortage is an ongoing concern for Cal Fire, the state agency that manages inmate firefighters when they’re on duty.

“The crews go where the (bull)dozers can’t go, the engines can’t go,” said Justin Schmollinger, the deputy chief of the camps program at Cal Fire. “It really has a big influence on us when we don’t have the hand crews. It takes longer to have containment of our fires.”

Schmollinger said the agency has no control over inmate visitations, which are managed by the state prison system.

Lifting visitation restrictions could pay off for the corrections department and the inmates and families it serves, said Hadar Aviram, a criminologist at UC Hastings Law who works with state prisoners. Research has found that strong family ties help incarcerated people reintegrate into society after release and avoid criminal activity.

Aviram said banning in-person visitations can deprive inmates of contact with loved ones when they need it most, and the prison system hasn’t worked hard enough to find a solution.

“This moment calls for more creativity and problem solving than what we’ve seen from these folks in the last year and a half,” she added.

Inmate firefighters are allowed to have weekly video calls with approved family members, but most of the camps are in rural areas with spotty reception, according to advocates and others in contact with the inmates.

Limited cell service has caused trouble for Jillian Case, whose husband is stationed at Trinity River Conservation Camp outside Redding. Before each video session, Case has to hire a babysitter, drive 15 minutes to a nearby college and join the call from her car. Even then, the video frequently freezes and cuts out.

Case hasn’t seen her husband face-to-face since March 2020. Neither have any of their six children.

“He hasn’t had a hug, he hasn’t had physical touch for that long,” she said, wiping away tears.

Last week, Case’s husband was granted a transfer to the California Correctional Center in Susanville, 120 miles east of Redding, so he can see his family in person. He will be required to quarantine before and after the visit in mid-August, keeping him off the firefighting force for a full month when wildfires could be at their worst.

The corrections department wouldn’t provide the number of incarcerated people who requested time off from the fire camp program because of the visitation ban. A spokesperson directed inewsource to file a public information request.

The number of fires across California this year is far outpacing last year’s record-breaking season, and state officials say prisoners are crucial for keeping the burns under control. To encourage participation, the program offers benefits that most inmates don’t receive, including a higher pay of $2 to $5 per day, plus an additional $1 per hour when on active duty.

Under Proposition 57, which took effect in May, inmate firefighters are also rewarded with a 30 day sentencing reduction for every 30 continuous days spent at camp.

It’s grueling work. Wildfires have grown larger and more destructive. Inmates are expected to spend days out in the field, extinguishing flames and chopping down trees on 24-hour shifts.

So far this year, Cal Fire has responded to more than 3,500 burns that have scorched 17,000 acres of land. The state is forecast to have “above normal significant fire potential” through September, exacerbated by a low Sierra snowpack and an intensifying drought.

Last year, Payne’s husband would sometimes go more than a week without contacting her at the height of wildfire season, leaving her worried he suffered a serious injury while on duty. She said the corrections department’s visiting policies aren’t fair to the inmates who put their lives at risk when they joined the fire program.

“Their No. 1 concern is not visitation, it’s fire season,” Payne said, adding that the state wants to “ensure that fires are being put out by these inmates because this is what they need to do for their two, three dollars a day.”

Payne and her husband expect him to be released from state custody within the next few months. The couple is counting down the days until they can see each other again face to face.

“People need that interaction, whether they’re incarcerated or not,” she said.