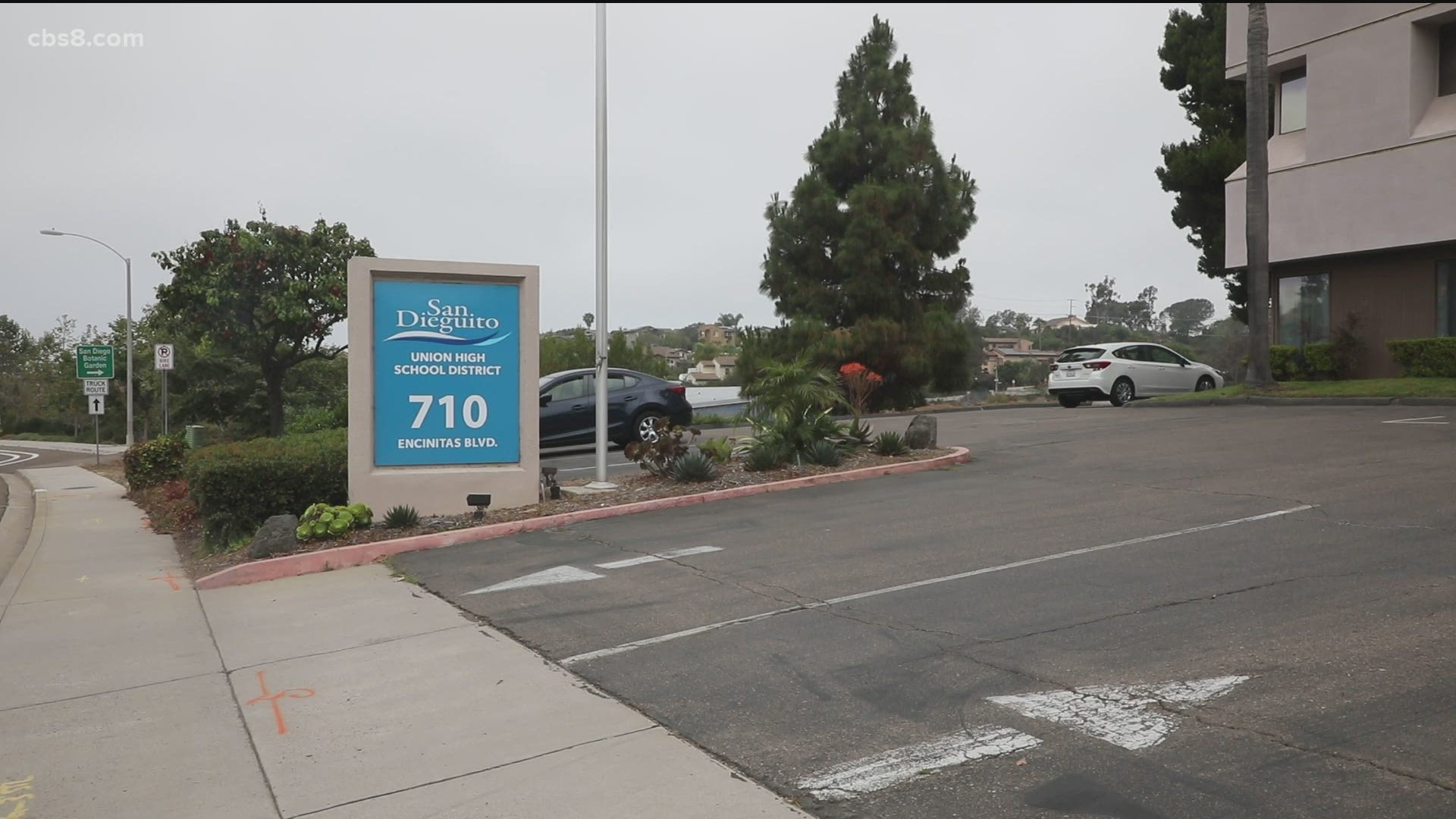 San Dieguito trustees were sold. They deliberated for less than 10 minutes before unanimously selecting Humes from a seven-candidate pool, citing his passion and prior experience with schools. One trustee labeled him a “visionary” who could bring people together at the turbulent district.

But Humes carries a checkered professional history. An inewsource investigation found his companies were out of compliance and his time at the Del Mar Schools Education Foundation — a position he touted to get on the school board — is shrouded in controversy.

A 2017 fundraiser that Humes organized for the foundation left unpaid invoices and no clear record of what happened to the donated money. The nonprofit never saw any proceeds from the event despite Humes selling tickets for as much as $70 apiece.

Nearly four years later, two of the event’s vendors confirm they are still owed a total of more than $25,000.

inewsource also found the biotech company Humes claims to partly own, Sercagen Inc., was not in good standing for about eight months in Delaware, where it was incorporated in 2018. It has no filings with the California secretary of state, and though Humes reports the company is based in Carmel Valley, the city of San Diego has no business tax records under that name.

Another biotech company tied to Sercagen, that Humes claims to work for, also is out of compliance.

About 4,000 students from kindergarten to sixth grade attend the district. Its elementary schools feed the San Dieguito Union High School District. It’s governed by a five-person Board of Trustees.

After less than two months on the San Dieguito board, Humes lost his seat. His appointment was rescinded following a successful recall effort led in part by the San Dieguito Faculty Association. The union had taken issue with Humes’ appointment process, saying trustees didn’t give enough time to involve the public.

He’s now trying to win the seat back in a November special election. The first Black board member of the mostly white San Dieguito district, he has denounced the union’s actions as racist.

Humes provided a new state filing after inewsource inquired about his company’s status. He said the 2017 fundraiser was unsuccessful but stopped short of taking responsibility for the unpaid bills, instead blaming an individual sponsor who he says skipped out on payments.

The fundraiser that raised no funds

Most of its donations come from the foundation’s “annual appeal,” when it encourages families in the affluent district to donate $800. Last year, it wrote the district a $1.1 million check.

But in 2017, the foundation was handed a unique opportunity. The city of Del Mar was hosting the Breeders’ Cup, and organizers were offering up an oceanfront 7,000-square-foot tent to hold a fundraiser ahead of the prestigious horse-racing event.

It is a great day for the Celebrate Del Mar event to benefit DMSEF at Barn at the Beach! pic.twitter.com/djFCG0LP6l

Susan Polizzotto, then the foundation’s board president, billed the fundraiser as a sort of honor. “Thanks to Ty,” she said in an email promoting the event, the foundation was picked from more than 60 nonprofits to be part of the weeklong celebration known as Barn at the Beach.

By then, Humes had already stepped down from the foundation board. He told inewsource the fundraiser was first discussed while he was still president and that he continued to organize the event after his departure. Tickets were available online ranging from $30 to $70.

But the event was a “financial disaster,” Humes conceded. He said poor ticket sales meant there were no proceeds to hand over to the foundation.

Polizzotto and Del Mar Superintendent Holly McClurg were informed of the unpaid bills within a couple months after the event, emails show. inewsource obtained the messages from an outside source with knowledge of the event. (Del Mar school officials objected to part of a public records request that sought communications tied to Humes, saying in their response that it was unduly burdensome. inewsource is contesting the denial.)

VOX Productions, which provided sound and lighting services for the event, told inewsource it’s still owed $5,000, and Whisknladle Hospitality says it hasn’t been paid for a more than $23,000 catering bill. Both sought payment for months.

“We would under no circumstances do business with Mr. Humes moving forward,” a Whisknladle spokesperson said in an emailed statement.

Emails show Humes and the foundation agreed: He was acting in a personal capacity and was responsible for the unpaid bills. In one message, Polizzotto said Humes told the foundation it had been selected as a beneficiary of the event.

“(The foundation) did not organize the event, did not authorize any expenses in connection with the event, AND also has not received any proceeds from it,” Polizzotto wrote in a May 2018 email.

The foundation is separate from the Del Mar district but raises funds to support STEAM+, the schools’ specialized curriculum. It’s run by a volunteer board. Humes served as the foundation’s board president.

But records submitted to the city of Del Mar lists the foundation as the insured party for the event. And a check written by one of the fundraiser’s sponsors was made out to the foundation, not Humes or any other entity.

The nonprofit wouldn’t provide any further details, with current President Phoebe Gardiner Katsell saying the board no longer includes any members who served in 2017. Past foundation officials did not respond to multiple inquiries.

Superintendent McClurg said she was made aware of payment issues “well after” the event. She told inewsource that school officials didn’t provide any oversight because as a separate entity, “that was not the District’s role.”

Humes said an individual sponsor was supposed to cover the vendor expenses but stopped communicating when payment was due. That sponsor isn’t listed on a flyer promoting the fundraiser, and Humes told inewsource he doesn’t know who the sponsor worked for.

“So, if anything, my fault on actually trusting from that standpoint without having past history with (the sponsor),” Humes said.

He said he doesn’t believe he’s responsible for the outstanding invoices, and that he tried to chase down the money.

“I did not, obviously, walk away from it,” Humes said. “I helped build that foundation to the level it was. That’s not my personality or how I operate.”

San Dieguito officials didn’t show any documentation that they had attempted to verify Humes’ claims before appointing him to help oversee the district’s $174 million budget. A district spokesperson said that because candidate applications were posted online, they were subjected “to what amounts to a public vetting process.”

Even seemingly minor details — Humes misspelled the name of his company in his board application — went unchecked.

But other scrutinized claims are more substantial, including his purported contributions to Del Mar schools and the professional experience he touted.

Humes attributed discrepancies dealing with his companies to “misinformation” and “misclarification” in government filings. But he stood by some of his claims in spite of public records reporting otherwise.

Humes told San Dieguito officials — and continues to claim on his campaign website — that he served as board president at the Del Mar schools foundation for six years, but tax forms report him holding the position for about half that time.

Records list Andrew Isaacman as foundation president during the first years Humes claims to have held the office. Humes, who maintains he served in the position for close to six years, said he succeeded Isaacman.

Humes’ assertion that he was an architect of the Del Mar district’s STEAM+ program also is overstated. The foundation isn’t involved in curriculum and only plays a role by promoting it in its fundraising efforts.

Humes clarified his role in the creation of the STEAM+ program, saying he was closely involved in meetings with district officials as it was being developed.

“Of course we don't decide the curriculum,” Humes said, “but we were integral in knowing what was needed so that we could raise money and take that message out.”

While Humes has been described as an accomplished entrepreneur, his company fell out of good standing because of a routine requirement: It must have a registered agent to accept legal documents on behalf of the corporation. The state of Delaware listed the company’s status as forfeited after Sercagen’s agent resigned in October.

Humes claims Sercagen is co-owned by San Diego-based Theragene Pharmaceuticals. But inewsource found Theragene remains suspended by the state’s Franchise Tax Board for failing to pay at least $3,200 in penalties stemming from the 2018 tax year.

Its business tax certificate with the city of San Diego also expired in 2018. That same year, a Superior Court judge issued a $240,000 judgment against the company in a salary dispute involving one of its vice presidents.

Humes isn’t listed as an officer in state filings for Sercagen or Theragene. The companies have no office at their purported address.

Jon Berglin, listed in state records as the CEO of both companies, did not respond to inewsource.

Humes later provided a letter, dated the same day as his interview with inewsource, that reported Sercagen to be in good standing. He said Theragene also was working to update filings.

Questions also have been raised about Humes’ legal residency. He says that he lives in a guest home in the district’s Area 5, which he previously represented.

But earlier this month, the Times of San Diego obtained text messages in which Humes purported to live part of the time at another address in a separate trustee area. In an interview with inewsource, Humes said the other house is used as an occasional “weekend getaway” while his children stay with him.

The Registrar of Voters used its typical process to verify Humes’ residence: It ensures that the address he lists — under penalty of perjury — in candidate paperwork is the same residence where he’s registered to vote.

The San Dieguito Union High School District is one of the highest-rated in the county, serving more than 13,000 seventh to 12th grade students in the North County communities of Rancho Santa Fe, Cardiff, Solana Beach and others.

But it’s been embroiled in turmoil. In addition to a nearly $14 million budget deficit, the district also saw separate lawsuits from the teachers union and parents over COVID-19 reopening decisions.

The controversy has permeated on the board. Humes took over the seat vacated by the resignation of Trustee Kristin Gibson, who was facing threats of a recall. Superintendent Robert Haley resigned at Humes’ first board meeting.

The teachers union has led several recall efforts, including an ongoing pursuit against Trustee Michael Allman for what it characterized as disparaging behavior at board meetings and on social media.

More than 13,000 middle and high schoolers attend San Dieguito schools. Humes was appointed to a vacant seat on the five-person board and served for nearly two months before he was removed from office.

It also hired a private investigator to follow board President Maureen “Mo” Muir over suspicions that she lives outside her trustee area. The investigation did not confirm the suspicions.

Duncan Brown, head of the union, said its teachers have not taken issue with Humes, but the “expedited” process that the board took to appoint him. The association decided early on that it would oppose the appointment because the public was given just five days to vet the candidates before the board took a vote, he said.

Humes’ removal leaves an entire trustee area  — the district’s most diverse, he said — unrepresented during crucial upcoming decisions. As the district takes on the hire of a new superintendent and a new teacher contract, Humes’ former seat sits vacant until the special election.

He told inewsource that voters should consider his full resume, including more than a decade as an active parent in local schools.

His only opponent so far is Julie Bronstein, executive director of development and community fundraising at UC San Diego. The special all-mail ballot election could cost San Dieguito taxpayers as much as $500,000, according to early estimates.