About one in six city employees missed work because they had COVID-19 or had to quarantine, causing problems for services like trash pickup and streetlight repairs. 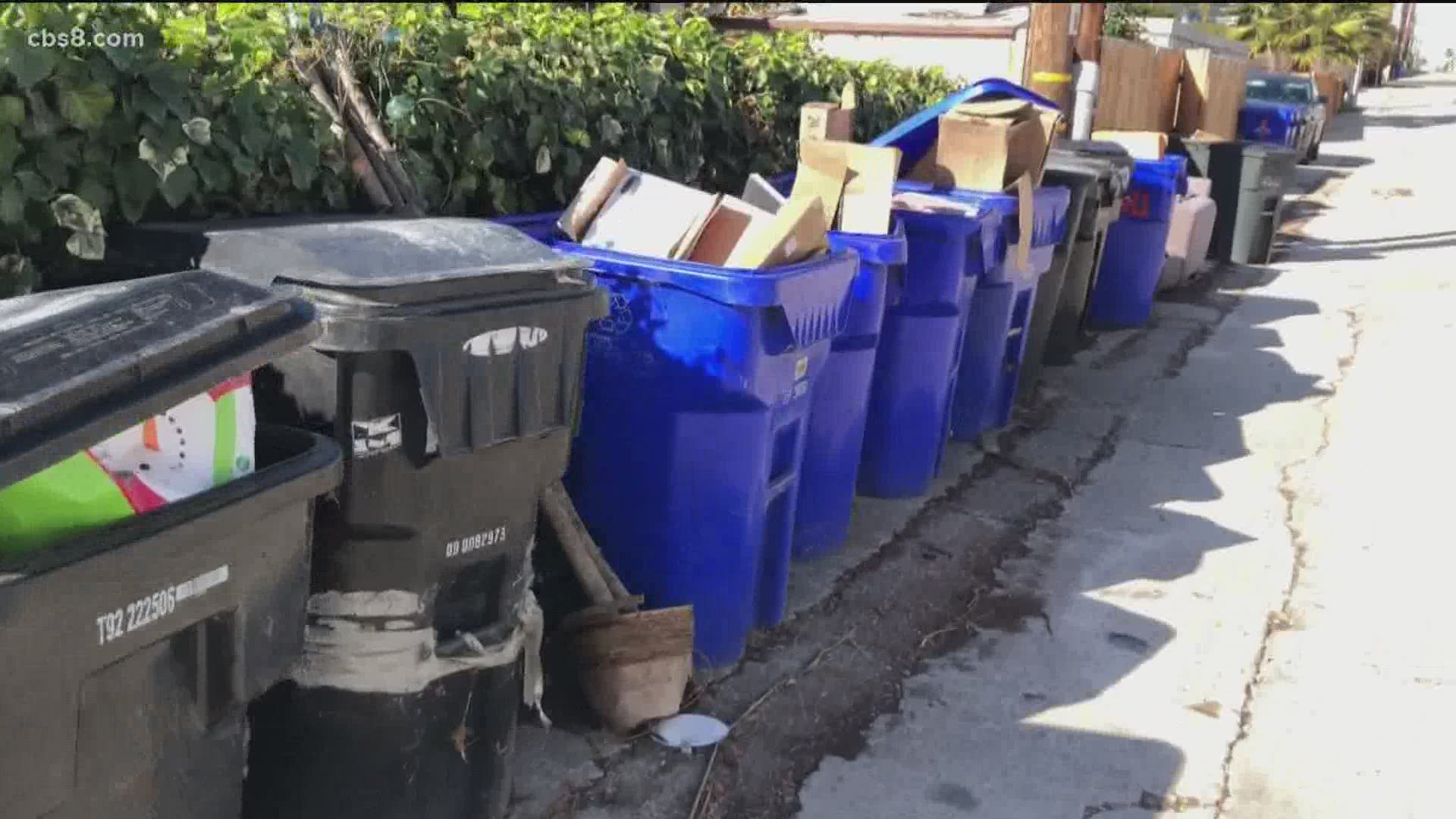 These are problems thousands of San Diegans have grappled with in recent months as city officials faced significant staffing challenges during the pandemic. About one in six city employees has had to miss work because they had COVID-19 or had to quarantine – leaving many departments that handle city services short staffed. Others missed work to care for their children during school closures.

For resident Alexis Lowery, this has meant trouble getting her garbage picked up.

“I had to go a whole week with a bunch of trash,” said Lowery, who rented a house in City Heights in April.

She reported the problem to the city but said her trash still didn’t get collected until her next normally scheduled pickup. The 25-year-old said she has experienced one-day pickup delays about once a month.

Lowery is not alone. An inewsource analysis of recent complaints to San Diego’s Get It Done app found trash and recycling pickup problems are the top gripe. Trash and recycling issues were up 89% in January compared to the same month the year before. Since the pandemic began in March, they’re up about 45% overall.

Streetlight outages, graffiti cleanup and potholes all fell within the top 10 complaint categories. It’s currently more than a four-month wait for streetlight fixes.

With San Diego facing a $154 million budget gap, city officials know there are challenges to dealing with upkeep and basic services.

“Without question, over the past 11 months the pandemic has had far-reaching impacts on every sector of our society,” city spokesperson Nicole Darling said in an email.

Darling acknowledged complaints are up but said that may be due to promotion of the city’s Get It Done app. Another city official said residents also may be noticing and reporting problems more now that they’re stuck at home.

inewsource’s analysis shows the app has also gained users over time, and that could be a factor in the increases.

Volume of trash, recycling and green waste is up

With people restricted from normal daily life because of the pandemic, it means more takeout food containers, more tending to gardens and lawns, and more cooking at home and food waste. Put simply: more trash.

City data shows trash, recycling and green waste volume is up 10.5% from March to October compared to the year before the pandemic.

Complicating the situation are staffing shortages in the Environmental Services Department, including with trash truck drivers. In January, 12 employees had COVID-19. Nearly two dozen more were symptomatic or exposed.

The department also has nine open driver positions due to retirements, promotions and resignations, a spokesperson said.

When fully staffed, the department employs 160 drivers. Drivers have to split up the remaining work and take on extra shifts when people are off due to COVID-19.

Laurie Simmons of Lemon Grove retired from driving trash trucks in December after 36 years with the city.

“There was overtime every day, and especially when the pandemic hit it got even worse,” said Simmons, 59.

Her routes included Point Loma and Logan Heights. She said she collected roughly 850 cans a day during her shift. But as COVID-19 took hold, the routes took more and more time to complete.

Typically trucks make three to four runs daily to the landfill, but with volume up they have to make more, Simmons said. Often drivers aren’t able to make it to the landfill before it closes, she said. That creates delays the next day because workers have to start their shifts emptying trash from the day before.

“The pandemic just changed everything for everybody,” Simmons said. Some of her co-workers got sick from the virus, she said, and others were single parents juggling childcare responsibilities with schools closed.

Roxanna Faust, 74, has lived in the Middletown neighborhood near Mission Hills for 50 years. In the past couple of months, she’s noticed the trash and recycling service has become less reliable.

The last week of January, her normal Wednesday recycling pickup was missed. Faust said she reported it to the city and it was picked up over the weekend. The trucks are also arriving later in the day, when they used to come in the morning, she said.

In North Park, Christopher Dye, 57, has had two green waste pickups missed in the last month or so. He reported both of them. The first time, the waste was collected later the same day, he said, but the second pickup had a hiccup.

“The regular refuse truck came and emptied it into the trash instead of the greens,” Dye said. “Then a few hours later, there was the greens recycling people outside.”

He said he went out and explained that a different truck had already come by.

“In that case, their time was kind of wasted,” he said.

inewsource compiled all available data from San Diego’s Get It Done program, an app residents can use to report problems with city services.

We isolated complaints about trash, recycling and green waste collections, and analyzed the data by month and by neighborhood. We then compared that data with the number of reports in other categories, including streetlight and graffiti complaints.

We also compared the average number of collection complaints submitted before and after the pandemic began. The “before” period stretched from March 2019 to January 2020. The “after” period covered March 2020 through January 2021.

Lastly, we compared the average month-over-month growth in complaints before and after the pandemic.

Darling said that the city strives to be open and responsive to residents’ problems and concerns.

“Our goal has been to communicate any potential service delays directly to our residents and visitors,” Darling said in an email.

Environmental Services, for example, now posts on the city’s website by 3 p.m. daily any planned pickup delays so residents can see if their neighborhood is affected.

As of last week, there had been 45 days of scheduled recycling delays since July 1. The city has not had any planned delays of trash pickups, a department spokesperson said.

COVID-19 has contributed to nearly 1,800 of the city’s 11,200 employees missing work — either because they tested positive, had symptoms or were exposed and needed to quarantine. The days add up: As of last week, 12,128 work days have been missed since March, according to the city.

The Police Department has had the most positive cases with 249 as of Feb. 4. The Fire-Rescue Department is next with 156, followed by Parks and Recreation with 80.

The numbers balloon when you include city workers who have been exposed to the coronavirus or are showing symptoms.

Electricians who fix the city’s streetlights have had about a 20% reduction in staffing due to COVID-19, said spokesperson Anthony Santacroce. There are other vacancies on top of that, which the city is trying to fill, he said.

It’s become “more difficult to mobilize teams to address larger streetlight issues” and keep up with resident complaints, he said in an email.

The department also faces major budget challenges and rising streetlight replacement costs. An infrastructure planning report published this month noted that the city would need to up its streetlight spending to $52.7 million a year to meet service needs. It currently spends $864,000.

Staff are having trouble keeping up in other areas, too. While traffic signal problems are listed on the city’s website as being fixed the same day, graffiti removal from private homes or apartment buildings takes an estimated 75 days. With the exception of palm trees, trees in the public right of way that need trimming have to wait much longer for attention: seven years.

To help deal with San Diego’s response to COVID-19, the city hired two employees in August. One of their responsibilities is to help lessen the pandemic’s toll on the city’s workforce.

“The city is doing a lot to ensure that the employees are safe,” said Nick Wright, labor relations manager at the San Diego Municipal Employees Association. The union represents about 5,000 employees.

“But at the end of the day, COVID is still there,” Wright said. “And so what unfortunately has happened is it's impacted a large number of employees throughout the city, but that does cause delays in service.”

RELATED: A side effect of the COVID-19 pandemic | More trash at landfill