The private shipyards in San Diego responsible for protecting Navy warships have not been following security protocols meant to protect those billion-dollar assets, and the Navy was alerted to the ... 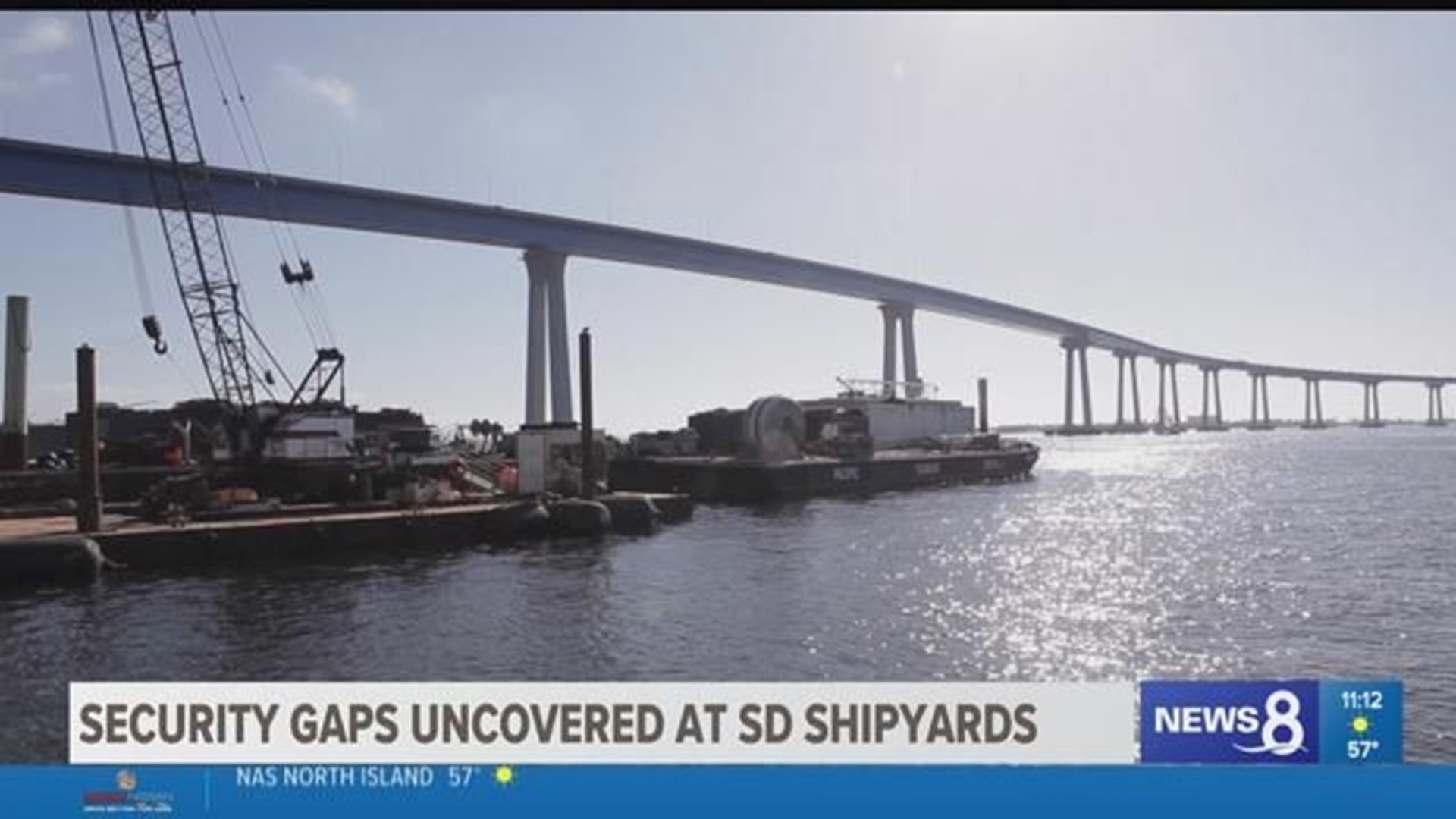 The private shipyards in San Diego responsible for protecting Navy warships have not been following security protocols meant to protect those billion-dollar assets, and the Navy was alerted to the lapses more than two years ago, an inewsource investigation has found.

The Navy knows the reality of waterborne threats, especially since the deadly terrorist bombing of the USS Cole in Yemen in 2000. That’s why it ensures its contracts with BAE Systems San Diego Ship Repair, HII San Diego Shipyard and General Dynamics NASSCO include money for protection – patrol boats, strong barriers and signage.

The HII San Diego Shipyard was repairing and upgrading the USS Chosin (left) and USS Comstock on Sept. 6, 2018. Neither ship had a waterborne security vessel guarding the asset, despite Navy regulations requiring it. (Brad Racino/inewsource)

It’s all spelled out in a list of requirements the Navy demands of private shipyards that work on its vessels. It reads, in part, “A dedicated waterborne security boat shall patrol within 200 yards of the protected vessel.”

Yet Joseph Allen, a former Navy lieutenant commander, told a group of security professionals at a San Diego conference in October, “the vulnerabilities of the bay scare me.”

Asked afterward to elaborate, Allen told inewsource, “I’ve spent a lot of time on the bay and see security gaps that could put billion-dollar warships at risk. If someone decided to actively case this bay, they could see those gaps.”

Allen is the CEO of Six Maritime, which provides security services, including on San Diego Bay. He declined to disclose details about his company’s work.

But to his point about safety issues, multiple trips inewsource made to observe security procedures on the bay found BAE and HII San Diego were either not providing the required number of patrol boats within 200 yards of ships – or weren’t providing any at all. NASSCO also appeared to be in violation but later offered an explanation.

Documents obtained by inewsource show the shipyards’ lapses are not a recent development – the Navy was alerted to them at least two years ago.

“I can't think of why they wouldn't have boats out there,” Democratic Rep. Scott Peters, a member of the House Committee on Veterans’ Affairs, said after learning about the security problems from inewsource.

The Navy wouldn’t tell inewsource or Peters how much it pays the shipyards for security, and neither would the shipyards. Susan Lawson, a Navy spokeswoman, said the amount is “business/competition sensitive” and “its release would impact the Navy’s ability to secure required services at the best possible price.”

inewsource has pressed the Navy for more than a year for records detailing how much taxpayers are paying the shipyards for protection they are not always providing. The Navy will not provide the contracts but did email the following information:

Additionally, Lawson told inewsource in a November email that the Navy conducts regular reviews at the three shipyards in San Diego and has found “no significant concerns with security at those facilities.”

An hour after receiving that email, an inewsource reporter drove to San Diego’s downtown waterfront, got on a boat, took photos and videos of the lack of patrol boats at the yards, and offered to send them to Lawson.

A month later, on Dec. 7, a different Navy spokeswoman responded to inewsource, saying “there are no known issues of non-compliance by the private shipyards.”

inewsource also asked for the dates and findings from the Navy’s last three reviews of security at the shipyards.

Instead of providing that information, the Navy wrote, “The private shipyards in San Diego have maintained compliance with Navy security requirements.”

The BAE, HII San Diego and NASSCO shipyards lie between Naval Base San Diego to the south and the Port of San Diego’s 10th Avenue Marine Terminal to the north. The Navy paid the yards more than $2 billion since 2017 to build, repair and maintain its warships, according to data from Propel San Diego.

The guided-missile cruiser USS Chosin laid up at the HII San Diego yard during three days in September, October and November. inewsource observed no security boats guarding the billion-dollar asset – a federal requirement that came with the Navy’s $37.8 million contract for updating and improving the ship. Nor was there a boat guarding the USS Comstock, a dock landing ship that sat on the other HII San Diego pier in September.

HII San Diego, formerly known as Continental Maritime, is a division of the publicly traded Huntington Ingalls Industries, the largest military shipbuilding company in the U.S. Last year, Huntington Ingalls agreed to pay $9.2 million to settle allegations that it violated federal law by knowingly overbilling the government for labor on Navy and Coast Guard vessels at its Mississippi shipyards.

A spokeswoman for Huntington Ingalls, Beci Brenton, told inewsource, “As a matter of policy we do not discuss the security measures we have in place, but they are adequate and do comply with the security requirements dictated by the Navy for the ships we have under repair at our facility. The Navy audits us weekly.”

inewsource then sent Brenton a follow-up inquiry, accompanied by photos, showing those measures were not in place.

“I have nothing further to add,” she replied.

A few hundred yards south of HII San Diego, six warships – worth billions collectively – sat at BAE Systems on Sept. 6. BAE’s contract with the Navy requires two patrol boats – one for every three warships – but during multiple passes on that day and on two follow-up visits, inewsource spotted only one.

BAE is a publicly traded multinational defense, security and aerospace company headquartered in London that employs more than 83,000 people. It pleaded guilty to conspiracy to defraud the U.S. government in 2010 and was sentenced to pay one of the largest criminal fines in the history of the Department of Justice’s effort to combat overseas corruption – $400 million.

A BAE spokesman provided a statement to inewsource that said, “The security of all our facilities is of paramount importance to BAE Systems. We work closely with the U.S. Navy to ensure all appropriate security protocols are in place. We do not publicly discuss specific security details.”

How To Reach Reporter
If you have a question or feedback for inewsource investigative reporter Brad Racino, email him at bradracino@inewsource.org.

Since inewsource began asking questions of the Navy, BAE has put a second boat in the water.

General Dynamics NASSCO is the southernmost of the shipyards. It is the largest full service shipyard on the West Coast and is part of one of America’s largest defense contractors – General Dynamics. inewsource observed four Navy ships in the yards on Oct. 24, accompanied by one patrol boat: Three ships laid along piers and one was in a dry dock.

NASSCO said the one boat fell under an earlier version of Navy rules that didn’t require patrol boats guard ships in dry dock.

inewsource asked for the proof behind that statement – a contract, for example – but NASSCO did not provide any.

Between renting an apartment in San Diego and crashing Flight 77 into the Pentagon on Sept. 11, 2001, Saudi-born terrorist Khalid al-Mihdhar also helped plan the deadliest terror attack against a sophisticated U.S. Navy vessel in history.

On Oct. 12, 2000, two terrorists approached the USS Cole in Yemen during a refueling operation. They stood, saluted, then detonated more than 500 pounds of explosives – ripping a 45-foot hole in the ship and killing 17 sailors.

The damaged USS Cole is shown with a 45-foot hole in its side following an Oct. 12, 2000, terrorist bombing in Yemen that killed 17 sailors. (FBI)

A government report released the next year found “waterborne terrorist threats proved to be the Achilles’ heel of the Navy’s counterterrorism program.”

Those threats “must receive more attention,” the report recommended.

Fifteen years later, security lapses at the San Diego shipyards caught the attention of Michael Owen, who served in the Marines and trained soldiers in Afghanistan.

Owen and his friend Brent Olds, who also served in the Marines, told inewsource in October that they couldn’t turn off their “combat mindset” while fishing near the San Diego-Coronado Bridge.

With a master’s degree in homeland security and trained in anti-terrorism force protection, Owen said he realized, “If we had a wetsuit and a tank, some bad stuff could happen, because we have the capability – and a lot of people have capability. It's malicious intent.”

“It wouldn’t have taken much,” Olds added.

“Not at all,” said Owen, who wrote about his concerns to Congressman Peters in 2016.

“There is an identified security risk to the ships in these private yards as there is not currently adequate security for them on the water side; they should have waterborne security patrols in front of them,” he wrote.

Michael Owen (left) and Brent Olds, who both served in the Marines, are shown on Oct. 12, 2018. They run VETality Corp., a nonprofit dedicated to employing veterans, and noticed security lapses at the shipyards while fishing on San Diego Bay in 2016. (Megan Wood/inewsource)

Owen, who runs VETality Corp. – a nonprofit focused on employing veterans – saw the gaps as an opportunity. He told Peters that dozens of veterans could be put to work if the Navy required the shipyards to comply with proper security protocols.

Peters’ office sent the letter to the Navy for a response.

A month later, Vice Adm. Thomas Moore responded that Navy departments were working together “to ensure that the commercial shipyards are in compliance with all applicable security requirements.”

A contract leading to a “full and open competition for waterborne security” will come out – in the next year or so, Moore wrote.

But if security is still a concern more than two years after Moore’s letter was written, Peters said that raises a question about whether the Navy “looked at it hard enough.”

“We generally trust the military,” Peters told inewsource last month. “I don't presume to tell the military how to do its job.”

The evidence inewsource presented “justifies taking the next step,” Peters said. His office has reached out to two subcommittees of the House Armed Services Committee to get the maritime security issues addressed.

“And I suspect that the people who are leading the Armed Services Committee – both Republicans and Democrats – would want to get the answer to this, as well,” he said.