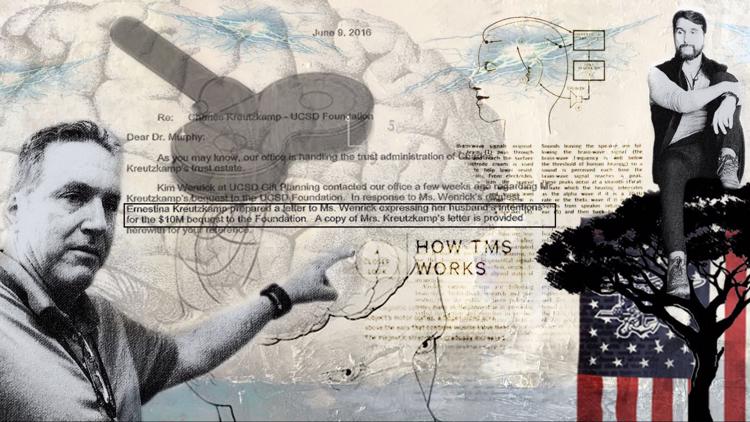 The Navy SEAL and his doctor: An experimental brain treatment blows up two lives

SAN DIEGO — When Johnathan Surmont checked himself into the San Diego VA psych ward in the summer of 2017, the tall, clean-cut veteran removed his sandals and absolved the medical staff of all sin.

He was God’s second son, he announced, and he couldn’t wait for karaoke night.

Surmont’s psychotic episode continued after his release from the VA, and it took the 45-year-old former Navy SEAL on a weeks-long breaking, entering and vandalizing tour from San Diego to Los Angeles. During that trip, he went far off the grid: ditching his phone, forgetting his own name and believing he was part of a covert military operation where all things in his path — coins, car maneuvers, airplanes, even arresting officers — cued him toward his next steps.

As a Navy SEAL, he was a highly trained military weapon capable of harming a large number of people, so family and friends breathed easier when the father of three resurfaced weeks later as an inmate at an L.A. County jail, calling himself John Francis Kennedy.

Surmont struggled with post-traumatic stress after tours in the Middle East and Asia. A car accident in 2013 worsened and compounded that condition by adding to it a traumatic brain injury. But more than 100 medical checkups and psychological evaluations showed he had no history of psychosis, mania, bipolar disorder, schizophrenia or hallucinations leading up to the onset of his symptoms in early 2017.

VA doctors were stumped when his psychosis fizzled following his incarceration, never to reappear. They noted in Surmont’s medical record that determining the cause was unimportant — an “academic exercise.” But the doctors had a hunch. So did Surmont. So did his family and friends. So did his psychologist and his psychotherapist girlfriend.

It involved Dr. Kevin Murphy, an oncologist and vice chairman in the school of medicine at the University of California San Diego. Medical records show Murphy supervised at least 234 treatments of an unproven type of electromagnetic therapy to Surmont’s brain in the years leading up to the psychotic break.

Transcranial magnetic stimulation is a relatively new medical treatment that uses electromagnetism to change the brain’s neural networks. The U.S. Food and Drug Administration has approved TMS machines to treat major depressive disorder, migraines and obsessive-compulsive disorder, and the therapy is rigorously studied — with published scientific research proving its safety and effectiveness.

Though Murphy’s career has focused on cancer care for more than a decade, after six years of working with TMS, he now considers himself a pioneer in that field. The doctor states proudly and often that his version of “personalizing” TMS surpasses all others, yet there is no clinical trial or published research supporting that claim.

“I would stand on a stage right now in front of the entire academic community and say, ‘What we're doing is better,’" Murphy told inewsource in a November interview.

Murphy calls his secret formula PrTMS, which stands for personalized repetitive transcranial magnetic stimulation. Over the past six years, he said, he has used it to treat around 5,000 patients suffering from autism, cerebral palsy, concussion, depression, anxiety, ADHD, PTSD, sleep disorders and a bad golf swing — all to great results.

inewsource spent more than 13 hours interviewing Murphy over several days to understand his history with Surmont and the basis behind his sweeping statements regarding PrTMS. In the end much of what he said crumbled when confronted by facts.

Dr. Kevin Murphy, an oncologist and founder of Mindset and PeakLogic, sits for a photo at the UCSD Center for Neuromodulation on Dec. 6, 2019.
Brad Racino/inewsource

It turns out PrTMS’s great results are based on Murphy’s opinion and inaccurate scientific benchmarks, not on the outcome of professional research.

Also, his repeated claims to veterans, nonprofit groups and the public about performing research on PrTMS are not true. The doctor told inewsource he has never conducted trials on PrTMS and chalked up his previous claims to being too liberal with the word “research.”

“It’s clearly the same mistake I made over and over again,” he said.

Yet there is no doubt people believe in PrTMS. The former vice admiral and surgeon general of the U.S. Navy, Harold Koenig, provided the doctor with a testimonial, and patients throughout 10 states pay thousands of dollars for it in clinics that license with Murphy’s company.

Even Surmont, who filed a complaint with the California Medical Board against Murphy in early 2019, believes the doctor’s personalized treatment is a “Nobel Peace Prize therapy” if done right.

Surmont, who refers to himself as Murphy’s “patient zero,” spent the past six months speaking with inewsource, hoping to clear his name. Reporters followed him to court appearances, family outings and dog parks, and accompanied the veteran to L.A. to retrace his steps from his psychotic break two years ago. Surmont also gave reporters access to his medical history, arrest reports, court records, friends, family and colleagues.

He isn’t seeking money or retribution. He said he wants the doctor to admit what he has done, learn from it and move on.

Murphy disagrees, and warned inewsource against trusting his patient.

“Just know that you’re picking a psychotic for your information,” Murphy said, adding that he wasn’t responsible for the Navy SEAL’s breakdown because he hadn’t seen or treated the veteran in six months leading up to it. Plus, he said, Surmont had a history of mania.

When confronted with Surmont’s medical records, which reveal Murphy had in fact treated the veteran 65 times during those six months and that Surmont had no history of mania, Murphy said it was possible PrTMS could be responsible, but not likely.

“The John Surmont story is one out of 5,000 people, right?” Murphy said. “I actually looked it up: It's more likely to be hit by lightning — one in 3,000 lifetime chance — than it is to have a psychotic episode from our treatment.”

Murphy is fed up and not only with the Navy SEAL.

A whistleblower complaint in June 2018 prompted the University of California Office of the President to investigate the doctor’s alleged misuse of a $10 million research donation. A gift that size meant UC President Janet Napolitano had to formally accept it.

Then UCSD suspended Murphy’s PrTMS research due to conflict of interest concerns and not one patient has been treated in his public lab. Yet Murphy has still managed to spend more than half of the $10 million gift. The university isn’t answering Murphy’s questions and his boss won’t speak to him, he said.

Outside academia, two lawsuits against Murphy claiming fraud, deceit and slander have cost the doctor time, money and clients.

Murphy even made enemies with San Diego native David Wells, one of Major League Baseball’s greatest left-handed pitchers. Wells donated $100,000 in 2018 to a veteran-focused nonprofit Murphy established but told inewsource he’d never give the doctor another penny after Murphy then repeatedly blew off Wells’ invitations to speak at his events.

“I’m being attacked on so many levels here,” Murphy said.

inewsource contacted more than 40 people affected by the doctor’s and veteran’s actions. Reporters read thousands of pages of university and medical records, lawsuits, arrest reports, research proposals, emails and leaked documents to put together a comprehensive picture of a nearly unbelievable story. They also interviewed TMS experts around the world to better understand the emerging therapy and get their take on physicians such as Murphy who are marketing it as the newest panacea in medicine.

The result is a narrative about two remarkably similar men: Both are veterans and fathers who discovered TMS out of desperation, formed a mutually beneficial alliance, suffered when their names were sullied, then turned against each other and the rest of the world as they fought to clear their names.

This is a story about a new therapy that could help millions of the most afflicted and vulnerable people around the world, if tested rigorously and honestly. Along with a companion piece here, it is also the first published account of an ongoing University of California investigation into how one of the largest-ever research donations for one of its employees was wasted.

It is a tale about what can happen when the line between hard science and anecdotal success becomes blurred, when big egos clash with big money and when doctors alter the brainwaves of some of the most dangerous men on the planet.

To see the complete Rewired investigation from inewsource click here.