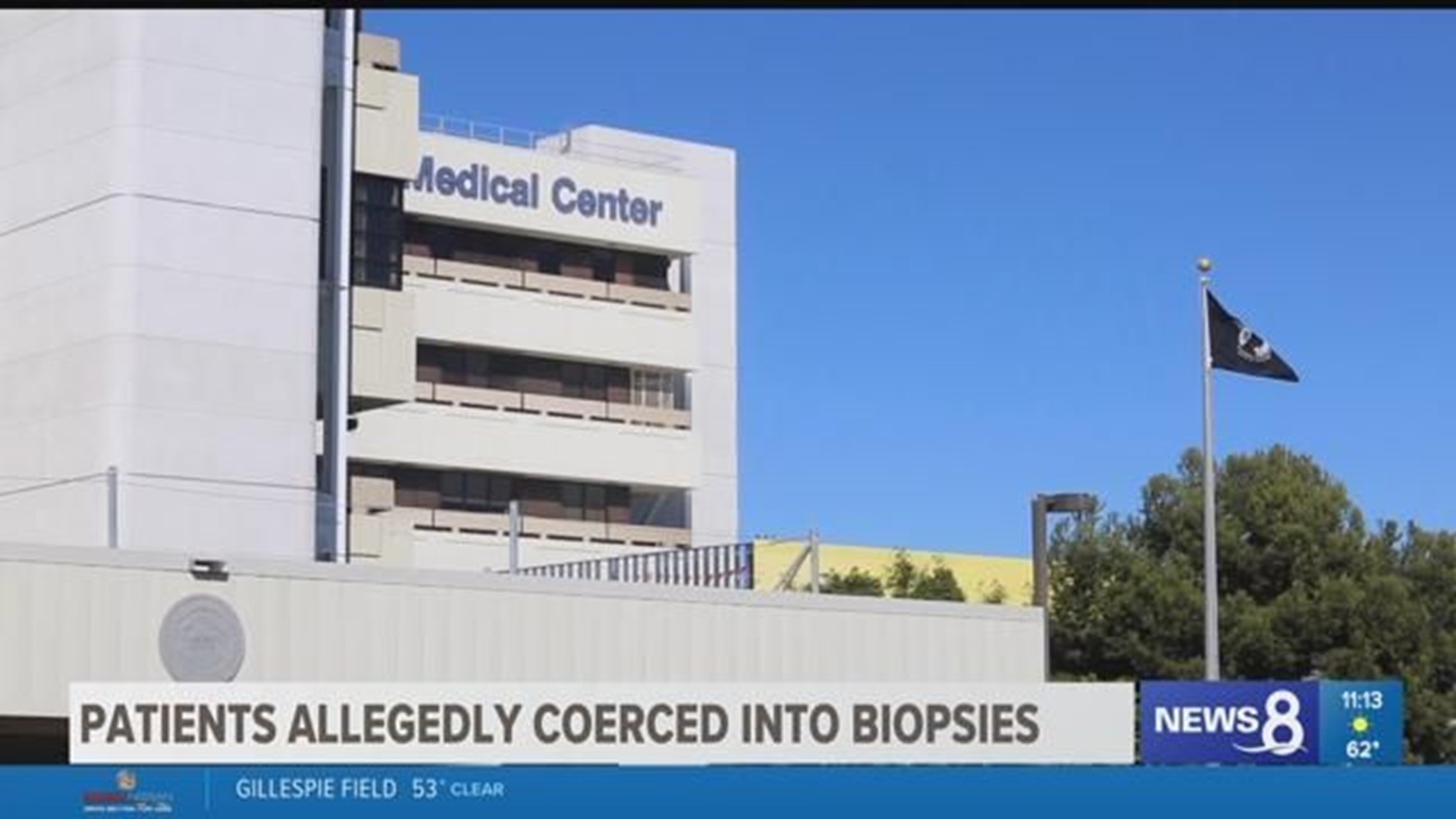 Two whistleblowers say dangerous medical research was performed on veterans suffering from alcoholism and liver disease at the VA San Diego Healthcare System, which serves the nearly quarter-million veterans in San Diego and Imperial counties, and has one of the largest research programs in the national VA network.

Federal investigators looking into the whistleblowers' allegations sent a strongly worded letter this month to President Donald Trump and members of the veterans affairs committees of Congress urging a "truly critical look" into the San Diego VA. 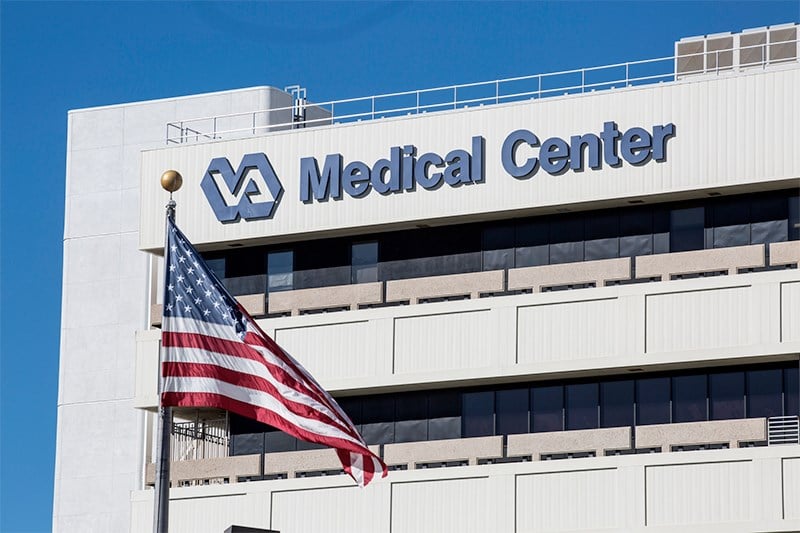 The outside of the San Diego VA Medical Center is shown on Nov. 2, 2018. (Megan Wood/inewsource)

Rep. Scott Peters, D-San Diego, serves on the House Committee on Veterans' Affairs and said he'd ask for hearings on Capitol Hill after learning about the report from inewsource.

"It looks like the VA may have known about this for awhile while it was happening and didn't act fast enough to stop it," Peters told inewsource.

The allegations involve Dr. Samuel Ho, a former division chief at the San Diego VA and professor of medicine at the University of California San Diego. Ho resigned from both positions in July to take a job in Dubai at the Mohammed Bin Rashid University of Medicine and Health Sciences.

Ho told inewsource in a Nov. 11 email that he would respond to our questions soon, but he hasn't. Nor did he respond to a follow-up email. 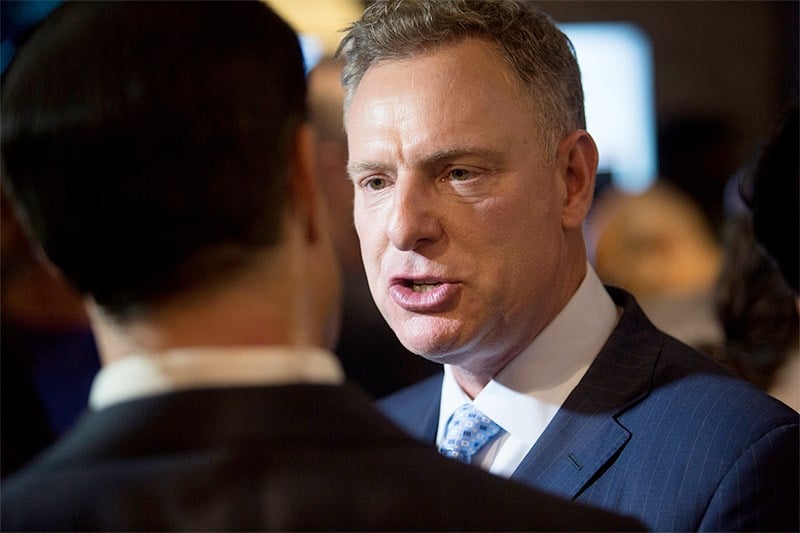 Ho used the San Diego VA's facilities, staff and physicians from at least 2014 to 2016 to conduct research on alcoholic veterans suffering from liver disease as part of a federally funded study. His original research proposal included pregnant women, but it was denied on the grounds that it would endanger fetuses. It was allowed to continue with modifications.

The whistleblowers - Martina Buck and Mario Chojkier - alleged to government investigators that Ho coerced patients to undergo a liver biopsy through a catheter in the neck so he could obtain grant money and publish scientific articles. They said the biopsies were medically unnecessary and potentially dangerous for this type of patient - one already seriously ill, at risk of excessive bleeding due to liver problems and unable to benefit from the long-term study.

"The optimal way to practice medicine is to do everything that is needed, but nothing that is not needed," said Chojkier, director of the liver and transplantation clinics at the VA and professor of medicine at UCSD.

"What is the risk benefit?" he said. 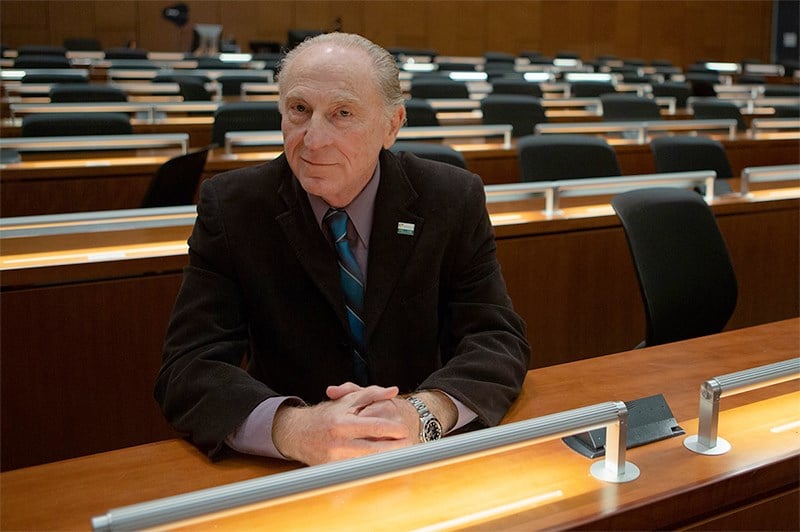 Dr. Mario Chojkier, shown on Nov. 16, 2018, is one of two whistleblowers who has made allegations against Dr. Samuel Ho, a former San Diego VA division chief and professor of medicine at UCSD. (Megan Wood/inewsource)

Chojkier is married to Buck, a research scientist with an expertise in liver disease.The two said they've suffered heavy retaliation for whistleblowing - a well-documented problem within VA systems across the country. Chojkier told the special counsel's office he suffered constant harassment after alerting VA and UCSD leadership to his concerns, and Buck was terminated at both institutions this year.

"I started volunteering at the VA in the late '80s, and I've been there ever since in some capacity," Buck told inewsource.

"I have seen a lot of unethical things, but they've never reached this level," she said. 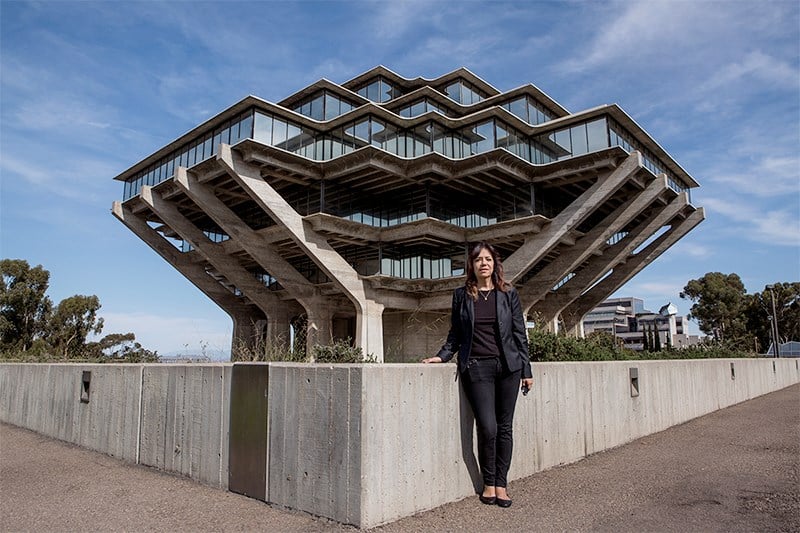 The San Diego VA did not document findings from an investigation into Buck and Chojkier's concerns after first hearing about them. Nor did local leadership refer the allegations about the human research to the VA's internal ethics and research committees. This forced the two to lodge complaints with a federal agency in Washington, which began a two-year investigation.

They also alleged to investigators insurance fraud, whistleblower retaliation and other medical and ethical issues.

The San Diego VA would not grant an interview for this story. Director Robert Smith relayed a statement to inewsource that read in part, "While the bulk of these allegations were not substantiated, where problems have been identified they have been addressed or are being addressed."

The Office of Special Counsel, an independent investigative body, was responsible for taking Buck and Chojkier's allegations in 2016 and delegating them to the VA for investigation. As a result, members of the VA Office of Medical Inspector visited the La Jolla facility for four days in April 2017 to investigate the complaints.

They toured the research lab, reviewed policies and procedures, and interviewed more than 30 doctors, nurses and specialists. The group substantiated some concerns but concluded "no substantial danger to public health" occurred at the San Diego institution. 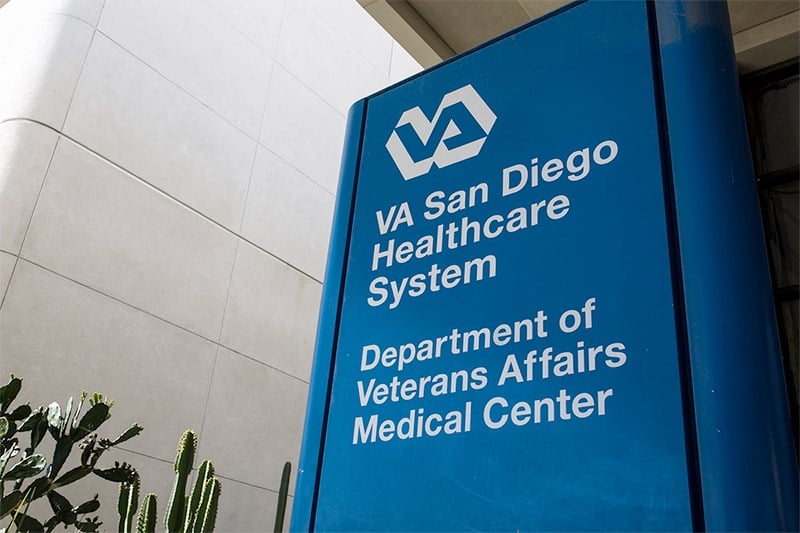 A sign at the San Diego VA Medical Center is shown on Nov. 2, 2018. (Megan Wood/inewsource)

The Special Counsel's Office called the VA's reports "unreasonable" because they failed to comprehensively address the "basic foundations of the whistleblowers' allegations," along with several other inconsistencies.

It was the eighth time in the past two years that the Special Counsel's Office has found the Department of Veterans Affairs' internal investigations were "unreasonable."

"It's up to Congress if they want to move it forward in any fashion," said Catherine McMullen, manager of the office's whistleblower disclosure program.

"This approach has prevented the VA from acknowledging the severity of systemic problems and from taking the necessary steps to provide quality care to veterans," Lerner wrote to President Barack Obama following the national VA wait-time scandal in 2014.

"As a result, veterans' health and safety has been unnecessarily put at risk," Lerner said.

inewsource is unaware of any documented physical harm in the San Diego human research cases.

But Henry Kerner, the special counsel in this latest case, said in the conclusion of his report to Congress and the president that he remained "deeply concerned about the quality of care" provided to veterans at the San Diego VA, "especially those participating in the research protocol."

The Standard of Care

Kerner's six-page letter focused largely on Ho's research, a component of a nearly $6 million, federally funded study led by the chief of hepatology at the University of Pittsburgh Medical Center. It aims to improve the diagnosis of liver inflammation caused by alcoholism.

The San Diego VA was one of 11 collaborators on the project, including U.S., Canadian and British universities along with hospitals in Mexico and Spain.

According to Chojkier and Buck, Ho needed 10 liver biopsies from VA patients to receive $150,000 as part of the research grant, and to possibly publish in medical journals.

He ended up with 28 biopsies and co-authored three published papers.

The VA's research safety panel, chaired at the time by Buck, denied Ho's initial project proposal for several reasons in February 2013. Chief among them, according to Buck, was Ho's plan to include pregnant veterans in a study that used X-rays. That's a known risk for a developing fetus.

"It's absolutely immoral and it is illegal in America to do a procedure like that," Chojkier told inewsource.

"It's absolutely prohibited by rules and regulation to expose a pregnant woman and her fetus to X-rays that are not necessary for the survival of the mother or the fetus.".

The VA did not mention the pregnancy issue in its reports to the Office of Special Counsel.

Ho submitted an amended research proposal that removed pregnant patients from the study and limited the research to "archival" samples of liver tissue, which Buck said means samples already in existence.

Except those samples didn't exist.

To produce the samples, the whistleblowers allege Ho oversaw transjugular liver biopsies on patients over the next few years, saying the procedure was necessary to diagnose an ailment. Then, he saved some of the tissue for the research project. The procedure involves placing a needle and catheter into the neck, guiding it with X-rays down to the liver and removing a piece of the organ.

It's considered" a safe, effective and well-tolerated technique," although not essential in managing patients with alcoholic liver disease who have already been diagnosed, according to Buck and Chojkier.

The whistleblowers allege Ho justified these biopsies as best practice - or "standard of care" - in diagnosing the veterans, even though the San Diego VA had never performed this surgery before on this group, according to the special counsel's report.

"The procurement of these biopsies in this way, to these specific kind of alcoholic patients, even the nonpregnant ones, is not standard of care," Buck said. "And so then it leads to the question of, 'Well, are these samples being obtained for research purposes and not being acknowledged that way?' So then that's another ethical dilemma. That's huge, and the foundation of the protocol begins to crumble at that point."

The VA report substantiated the standard of care claim by citing the opinion of a UC San Diego physician who had trained under Ho and co-authored research papers with him on the biopsies under question.

The special counsel took issue with that opinion and with other findings in the VA's investigation.

"Arguably, this individual has a conflict of interest," the special counsel wrote, "which should have necessitated an additional independent opinion to answer questions of standard of care."

Robert Cranston is the Illinois medical director for the American Academy of Medical Ethics and a clinical associate professor at the Carle Illinois College of Medicine. He read the special counsel's report and told inewsource that if the allegations are true, Ho has "gone beyond" what the VA initially approved for research.

"But the second part that's worrisome," Cranston said, "is that if the whistleblowers' accusations are true, and the VA's responses are as stated, it looks like someone at the VA could be attempting to cover up exactly what went on."

"I think this deserves closer scrutiny," he said.

The whistleblowers shared documentation with the Office of Special Counsel stating Ho, on at least seven occasions, overruled colleagues who didn't recommend this procedure.

The whistleblowers also questioned whether all of the research subjects were capable of consenting to the biopsy. Patient histories they provided to the special counsel's office say at least eight veterans signed a consent form without undergoing a "cognitive assessment by an experienced and unbiased expert."

The VA report did not address these concerns, but it did find violations of privacy laws in Ho's research, along with participation by unqualified staff, miscommunication and poorly maintained or missing research records. It issued recommendations and follow-ups for the San Diego VA but did not address discipline.

In concluding the Office of Special Counsel report, Kerner wrote that he would "strongly urge the VA to revisit its findings in this matter and take a truly critical look at the research being conducted and care provided to liver patients" at the San Diego VA.

Chojkier said his colleagues at UCSD and the VA are "extraordinary, talented individuals with exceptional dedication to patient care." What's happening in this case, he said, is "an extraordinary exception to the rule."

Congressman Peters told inewsource one of the concerns he has about the VA in general is a cultural problem.

"It's about preserving the bureaucracy rather than protecting the vet. And this is all cover your bottom kind of stuff. Like 'Let's just not admit we have a problem, let's not admit we did anything wrong.'

"But to really change the culture at the VA, to make sure that it's first class, that's the first thing you have to do - you have to say, 'Listen, this is what we're not getting right.'"

Peters said the House committee will have many questions for the VA about Ho's research, and he expects the hearings would take place in the first half of 2019.