Local activist Tasha Williamson, who ran for mayor of San Diego in March, said she wants to see action by law enforcement and the public. 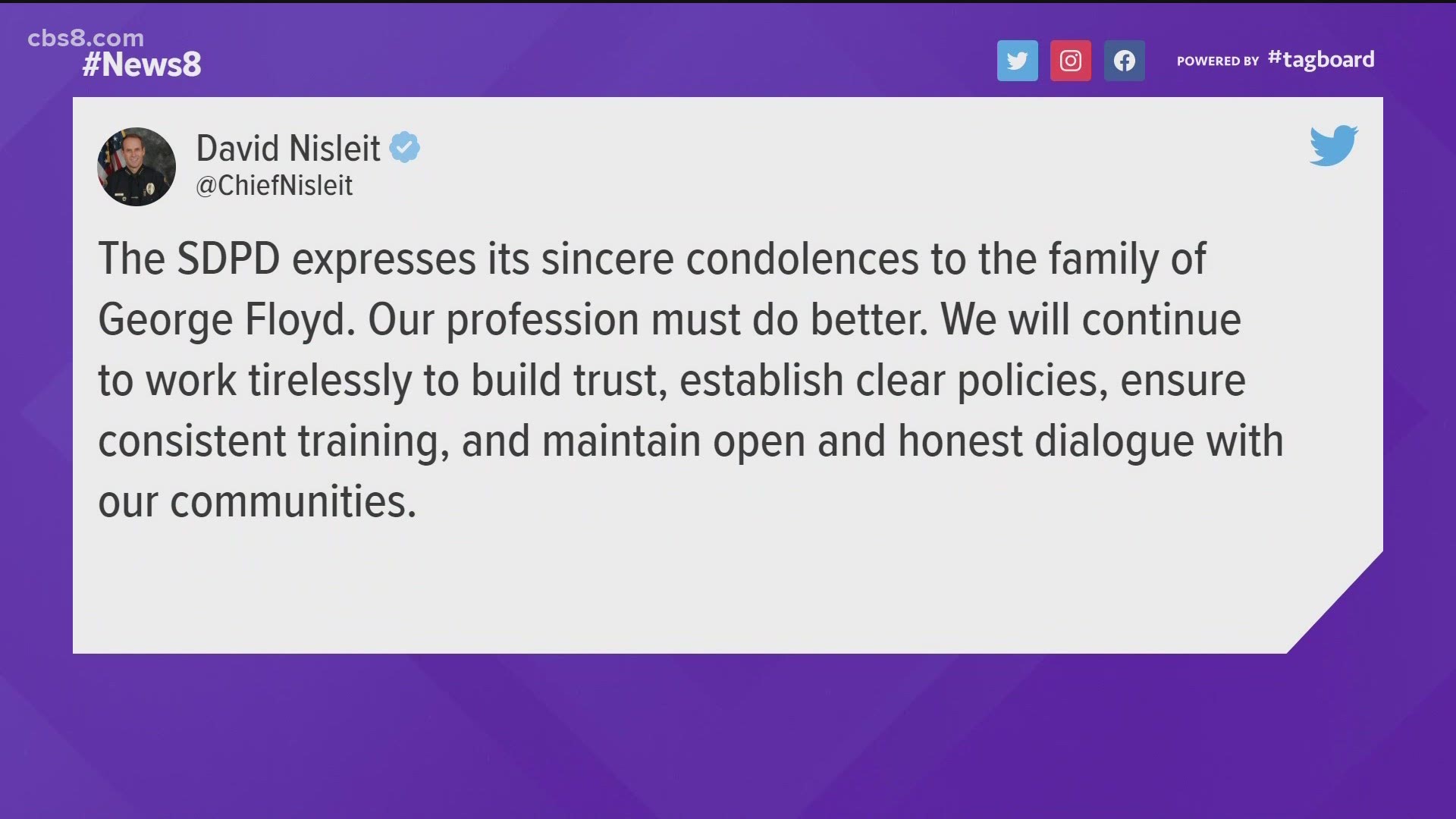 SAN DIEGO COUNTY, Calif. — Taking a stand on an issue that has unleashed new waves of anguish about U.S. race relations, San Diego Police Chief David Nisleit offered his condolences to the family of a black man who died after a white Minneapolis police officer pinned him to the ground by the neck with his knee and held him there until he passed out.

"Our profession must do better. We will continue to work tirelessly to build trust, establish clear policies, ensure consistent training, and maintain open and honest dialogue with our communities.," Nisleit wrote Wednesday of the Memorial Day death of 46-year-old George Floyd, who was handcuffed and repeatedly protested that he could not breathe during the ordeal.

The violent arrest, a witness video of which has gone viral online, led to the firing of Minneapolis police Officer Derek Chauvin and three colleagues who stood by as he held Floyd to the ground for minutes on end.

“Chiefs nationwide have never made a statement in reference to another police departments and things that are occurring with different deaths before,” said Francine Maxwell, President of the NAACP – San Diego.

Maxwell spoke with Nisleit about his comments Wednesday. The NAACP plans to meet with him in a few weeks to continue the discussion.

“People can lay things that have been swept up under the carpet for years. We're going to pull the carpet back and we're going to begin. We need people to remember why they got into law enforcement to be peacemakers, peacekeepers,” said Maxwell.

“What I saw happen to George Floyd has horrified and disturbed me to my core. We as a law enforcement profession must collectively take a hard look inside ourselves. We must do better,” said Zimmerman on Twitter, who is currently an adjunct professor and public safety consultant at National University.

The local chiefs join many nationwide in condemning the actions of the officers. Protesters are pushing for them to be arrested.

Local activist Tasha Williamson, who ran for mayor of San Diego in March, said she wants to see action by law enforcement and the public.

“I don't call these types of officers “officers”. These are rogue officers. Their departments have allowed them multiple times to go without accountability,” said Williamson. “Good police officers -- they need to stand up. They need to speak out and they need to stop their officers in the action of what they do when it is going to cause harm or injustice to another person.”

Floyd’s death has led to protests in several cities nationwide, including Southern California. Protesters blocked a portion of the 101 Freeway Wednesday afternoon in Los Angeles.

“For me, I want white America to be devastated and outraged as much as we are,” said Williamson. “We want people to know that rogue officers are anti-justice. They do not honor the badge. They do not protect and serve. And they are lawless. And those types of officers we should eradicate from police departments all over the world.”

Chula Vista Police Department
Just a friendly reminder from CVPD that during the COVID Pandemic, O... fficers continue to enforce all parking rule and regulations. 72-hour parking rules are enforceable as well. However, officers are exercising discretion when individuals are quarantining inside the vehicle.