A list of parks slated to reopen Tuesday has been posted. Beaches could reopen by the end of the month. 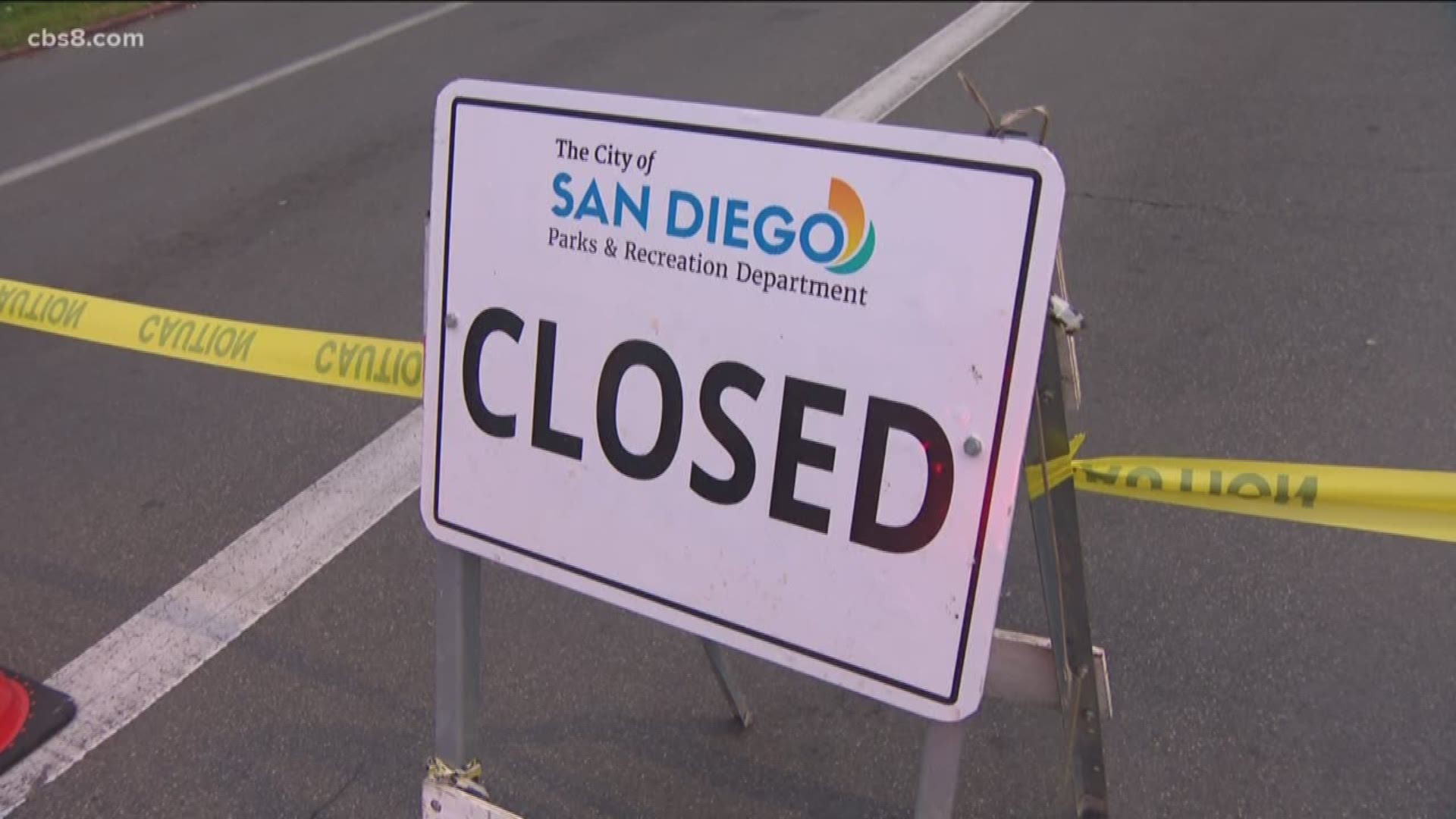 SAN DIEGO — The mayor of the City of San Diego, Kevin Faulconer, on Monday announced the limited reopening of the city's neighborhood parks after being closed nearly five weeks due to the coronavirus pandemic.

Mayor Faulconer said San Diegans have been following the rules and hospitals have been able to meet the demands of patients related to the deadly virus.

Beginning on Tuesday, neighborhood parks will reopen in a limited capacity and will remain open as long as residents follow the rules. If the rules are not followed, Mayor Faulconer warned the parks would once again be closed.

Residents will be able to go to their neighborhood parks but will be limited to individual activities such as walking and/ or jogging. People must have facial coverings.

People will still not be able to gather in groups or participate in any group sports. Parking lots, basketball courts, and playgrounds will continue to be closed.

A full list of parks slated to reopen is now available on city's website at sandiego.gov/coronavirus. Mayor Faulconer said the smaller parts of Balboa Park will be reopened.

"We want to provide, of course, an outlet for people to be physically and mentally active as we grapple with this new normal going forward," Faulconer said.

Mayor Faulconer also mentioned he talked to mayors of cities along the San Diego County coast to discuss the possibility of reopening golf courses, boardwalks, trails, and beaches.

The decision to reopen them by the end of the month will be driven by data, in accordance with county health officials to ensure public safety, not only to the public but to public safety personnel.

Mayor Faulconer warned that depending how well residents conduct themselves with the reopening of neighborhood parks will dictate what else reopens.

WHAT IS ALLOWED STARTING TUESDAY:

WHAT IS NOT ALLOWED:

Here is a list of mayors Mayor Faulconer is working with to reopen the beaches and give residents "water access":

Hundreds of protesters lobbying to ease Gov. Gavin Newsom’s tight stay-at-home orders rallied around the California Capitol as Newsom outlined how he has approved some counties’ gradual relaxing of some restrictions aimed at slowing spread of the coronavirus.

Newsom on Monday said he approved a plan by Ventura County to reopen golf courses and parks. That prompted the top health official in neighboring Los Angeles County to implore residents not to flood those locations as warmer temperatures arrive this week.

Newsom said he'll give more details about a plan to relax rules throughout the state on Wednesday.

News 8 has joined forces with The San Diego Foundation to raise immediate, emergency funds for our most vulnerable neighbors in need. Here is how you can help.

We also have a Frequently Asked Questions page we will continue updating with the latest information and reports.

Currently, there is no vaccine, however, the CDC suggests the following precautions, as with any other respiratory illness:

Know how it spreads:

There is no vaccine

If soap and water aren't available, use hand sanitizer that contains at least 60% alcohol

Put distance between yourselves and others

Stay home when you are sick

Wear a facemask if you are sick

Cover your cough or sneeze with a tissue, then throw the tissue in the trash

If you don't have tissue, cough or sneeze into the inside of your elbow

Immediately wash your hands after coughing and sneezing

You can find information on disinfecting and cleaning on the CDC's How to Protect Yourself page.

The California Department of Public Health has issued guidance on the use of cloth face coverings to protect against the spread of the novel coronavirus COVID-19.

The County of San Diego has made face coverings mandatory for those working with the public including grocery stores, pharmacies, gas stations, convenience stores, and similar businesses.

While officials say these face coverings are not a substitute for practices like social distancing and handwashing, there is evidence to suggest that the use of cloth face coverings by the public during a pandemic could help reduce disease transmission. Officials do not recommend the public use N-95 or surgical masks which are needed by health care workers and first responders.