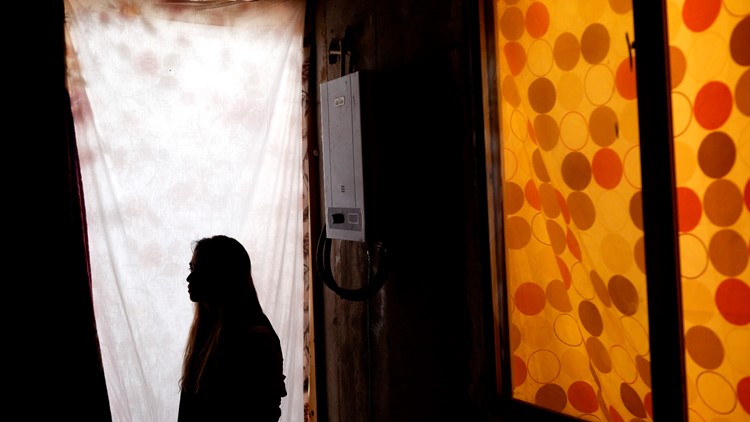 Photo by: AP
In this Tuesday, Nov. 5, 2019, photo, Lizbeth poses for a portrait in a relative's home in Tijuana, Mexico. Lizbeth, a Salvadoran woman seeking asylum in the United States, never thought she would be returned to Mexico to wait for the outcome of her case, after suffering multiple assaults, and being kidnapped into prostitution on her journey through Mexico. Critics of the Trump administration's "Migrant Protection Protocols" policy, say it denies asylum seekers fair and humane treatment, largely by forcing them to wait in a country plagued by large pockets of drug-fueled violence, demonstrated this week by the slaughter near the U.S. border of several children and women. (AP Photo/Gregory Bull)

Migrants live in fear at Mexico-US border as violence flares

SAN DIEGO —  A Salvadoran woman seeking asylum in the United States spends her days holed up in her cousin's cramped slum house just across the border in Mexico — too scared to leave after receiving a savage beating from two men three weeks ago while she was strolling home from a convenience store.

The assault came after she spent four months in captivity in Mexico, kidnapped into prostitution during her journey toward the U.S.

The woman, 31, is among 55,000 migrants who have been returned to Mexico by the Trump administration to wait for their cases to wind through backlogged immigration courts. Her situation offers a glimpse into some of the program's problems.

Critics have said the administration's policy denies asylum seekers like the Salvadoran woman fair and humane treatment, forcing them to wait in a country plagued by drug-fueled violence — illustrated this week by the slaughter near the U.S. border of six children and three women . All were U.S. citizens living in Mexico.

RELATED: ACLU sues DHS on behalf of Guatemalan family turned away at border

RELATED: Border Protest: Clergy among those to stand trial after arrest

The Trump administration insists that the program is a safe alternative in collaboration with the government of Mexico, even as the president vows to wage war on drug cartels that are a dominant presence in the dangerous border cities where migrants are forced to wait.

The Department of Homeland Security added in a report last week that the program is "an indispensable tool in addressing the ongoing crisis at the southern border and restoring integrity to the immigration system."

The woman said in an interview that she fled Santa Ana, El Salvador, on Jan. 31 after days on the run from a police officer who demanded sexual acts.

She never said goodbye to her five children — ages 5 to 12 —fearing the officer would discover where they lived. The Associated Press granted her anonymity because she fears for her safety if her identity is revealed.

She said she was kidnapped after leaving a Mexican government office on its southern border with Guatemala after inquiring about getting asylum in Mexico.

She and others were taken in a minivan to Ciudad Juarez, on Mexico's border with Texas. Captors in a large room argued over who would take possession of the men, women and children gathered there.

One wanted to extort money from her family. A second wanted to force her into prostitution and she ended up with him before her escape this summer to the home of a stranger who paid for her bus ticket to her cousin who lives across the border from San Diego.

She said she shared her story with U.S. authorities after she walked across the border illegally alone on Sept. 18 where the wall ends in Tijuana, Mexico, and waited for an agent to arrest her. They rejected her pleas that it was too dangerous for her to return to Mexico to wait for a date in U.S. immigration court for a judge to hear her case.

Then, on Oct. 14., she said she was punched and whipped with a belt by assailants near her cousin's home in a hillside neighborhood of dirt and concrete roads and empty, half-built homes occupied by drug addicts and squatters.

She still had bruises as her case was heard last week in San Diego, when immigration Judge Lee O'Connor made no secret of his disdain for the policy of keeping asylum seekers waiting in Mexico.

The scene in the courtroom was chaotic, with the infant child of a Honduran woman whimpering and then bellowing as O'Connor entered.

"Silence in the courtroom!" he barked. A guard escorted the child and his mother to the hallway.

The judge questioned the two attorneys representing asylum seekers about how long it took them to visit clients in Mexico, noting infamously long waits to cross the border.

But the judge ruled the Salvadoran woman and the Honduran family were ineligible for the program because, in his view, the law governing asylum seekers only allows it for people who present themselves at official border crossings — not for immigrants like her who entered illegally.

Customs and Border Protection officials then sent the woman back to Mexico with a notice telling her she had another court date set for Dec. 16, even though her case had been terminated.

The woman's lawyer, Siobhan Waldron, accused Customs and Border Protection of making up the Dec. 16 court date to get the woman out of the U.S. and back to Mexico. Waldron said she does not know what will come next for her client.

Customs and Border Protection did not provide answers to emailed questions about the woman's case. But Kathryn Mattingly, a spokeswoman for the Justice Department's Executive Office for Immigration Review, confirmed Wednesday that the Salvadoran woman has no future court dates set.

For now, the Salvadoran woman sleeps on a foam mattress in a sparsely furnished one-bedroom home of concrete slabs and plywood walls — still scared to leave.

She claimed that U.S. authorities told her while she was in custody that efforts to remain in the U.S. were futile.

"There's nothing you can do," she said she was told by one official. "This is not your country."