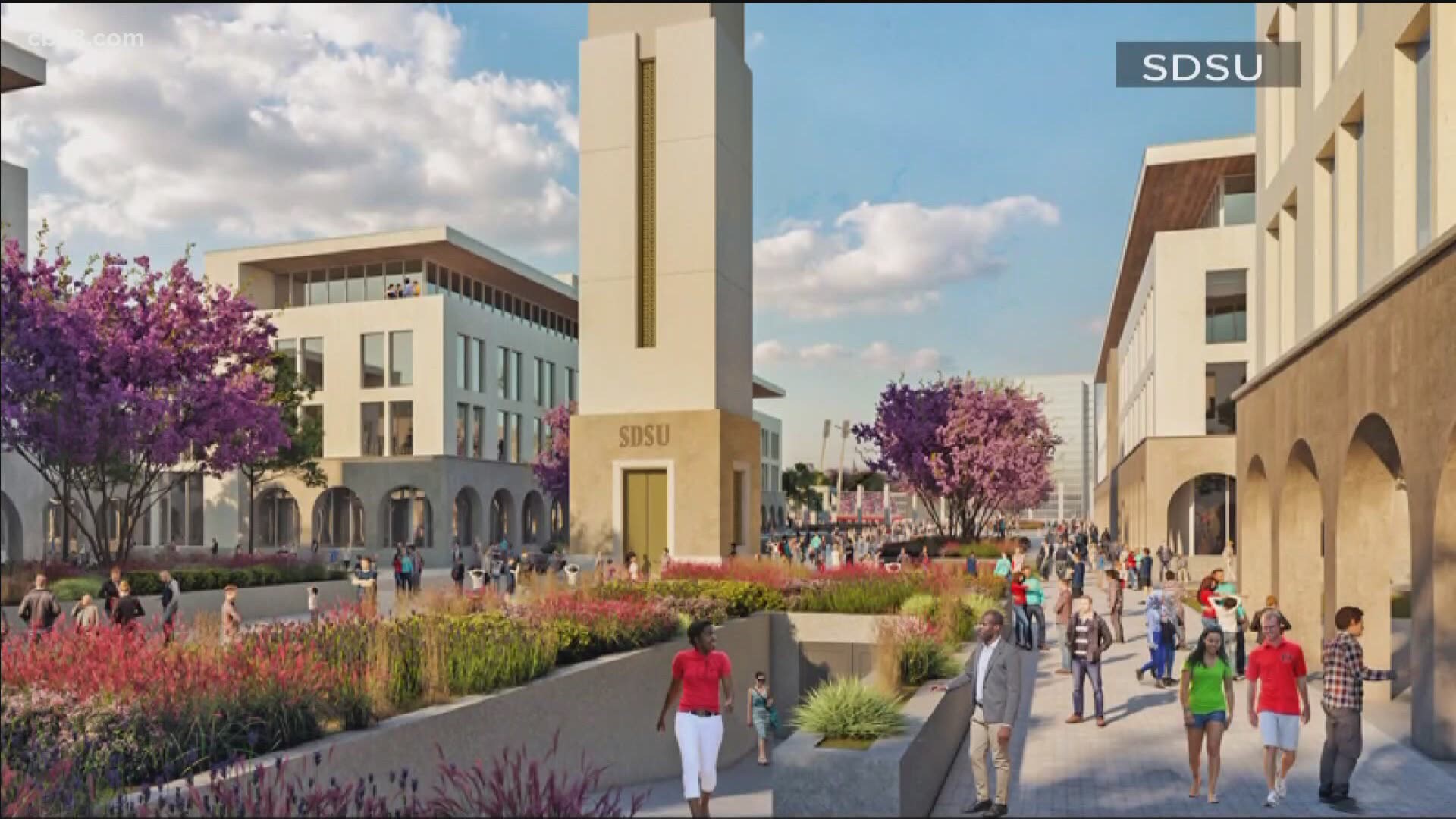 All sides met before the City Council meeting and planned to move forward the proposal during a special meeting.

The sale of the site to SDSU was approved by voters with Measure G back in 2018.

Councilwoman Barbara Bry said she believes the negotiations led to all sides hashing out the particulars of the deal and they will move forward during Friday’s meeting.

“Today a new future for Mission Valley took shape, one with an expansive river park, a new stadium and a world-class campus that will serve our region for generations for come,” Mayor Kevin Faulconer said. “Both parties wanted to get this done right, and the time and thoughtfulness put into this agreement have created a final product San Diegans can be proud of. This agreement is fair and equitable, and I want to thank Council President Gomez, City Attorney Elliott and SDSU for their commitment.”

During negotiations, there were issues raised by City Attorney Mara Elliott over access to water and sewer facilities on the site. Elliott's office released this statement:

"After negotiations that were long and difficult, but absolutely necessary, SDSU has agreed to a number of taxpayer protections that we insisted be included in the Mission Valley stadium sale agreement. These protections will safeguard important City projects, like Pure Water, ensure public access to the River Park, minimize our exposure to liability, and prevent avoidable increases in residents’ water and sewer bills. My team will continue to stand strong to make sure this deal is done right and that SDSU West is a project that benefits everyone.”

The final cost is expected to end up at more than $88 million making it be one of the most expensive as well as most complicated land deals in San Diego’s history.

Faulconer said the project "relieves the city of the financial burden,” that will take time to recover from the pandemic.

Once the sale is completed, SDSU plans to build a 55,000 seat stadium, classrooms, research buildings, housing, and retail shops.

SDSU President Adela de la Torre said, “We have reached a pivotal milestone moment. SDSU Mission Valley will be a true revitalization of public land in all aspects of the plan.” She added, "We are thrilled to take this critical next step toward closing the sale and creating generational opportunities for all San Diegans.”

City Council approval on Friday lays the groundwork for a final Purchase and Sale Agreement, which requires two City Council hearings. Following those actions, a 30-day referendum period is legally required before Mayor Faulconer can sign the agreement, and escrow can be initiated. SDSU expects to take ownership of the property in late July 2020.

“Today, the City Council took a historic step toward transforming part of Mission Valley and partnering with SDSU to expand the university’s educational footprint, add new student and faculty housing, and create a beautiful new River Park. I am ready to work hard to bring forward and take action on a finalized purchase and sale agreement on June 9, fulfilling the will of the voters, and realizing this generational opportunity to improve San Diego.”