When ten-year-old Junior Nunez Vasquez met Bently the poodle there was an immediate connection that his family is overwhelmed with joy. 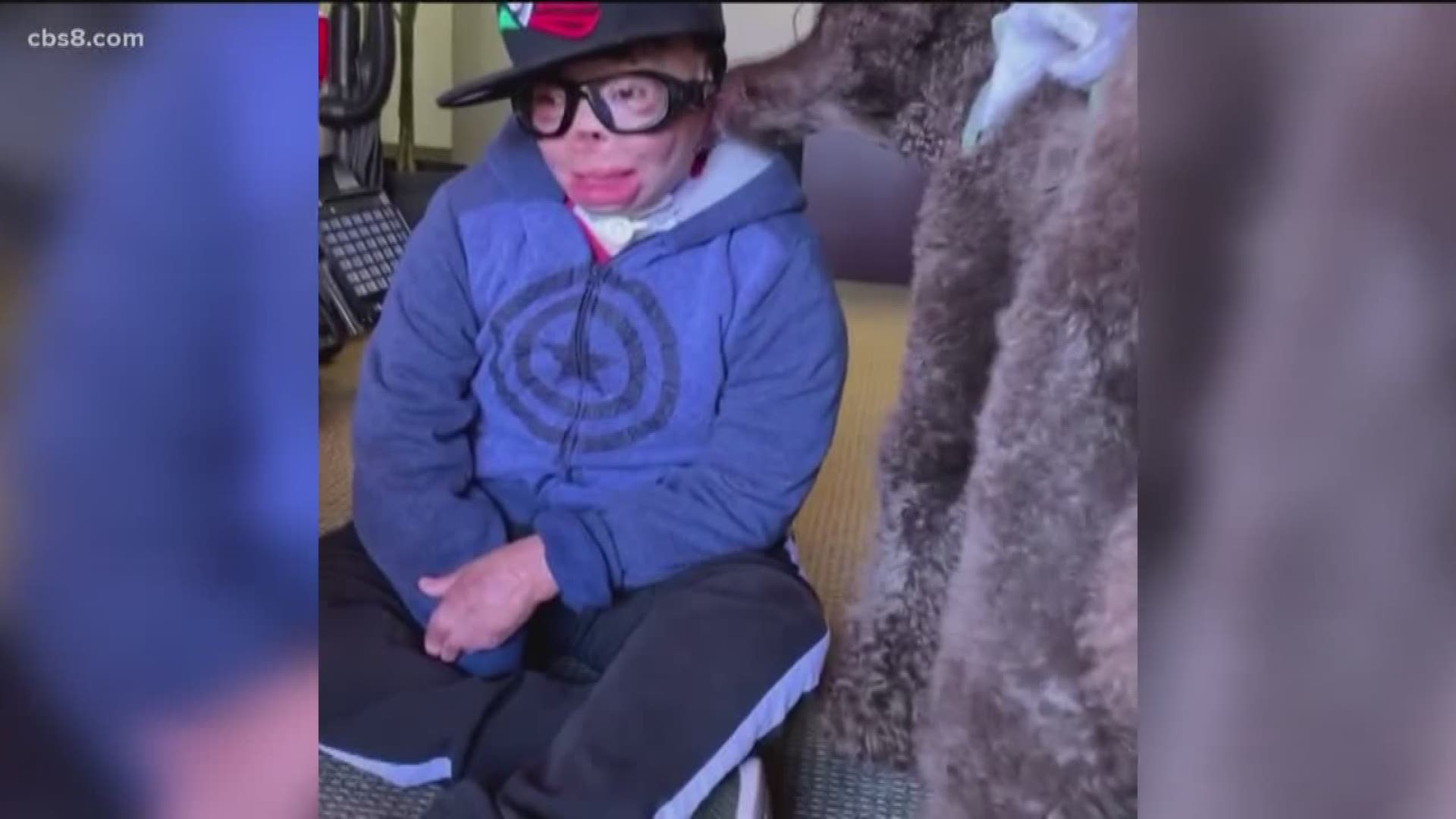 SAN DIEGO — A remarkable moment between a little boy and a dog is going viral.

Ten-year-old Junior Nunez Vasquez was severely burned in a house fire in 2015 where his little sister was also burned and his older brother died.

While receiving a new toy this week, he received a bigger gift from a family dog.

‘We were both in awe to see their connection, he was all smiles,” said Junior's aunt, Maria Isaura Vasquez.

A cellphone video recorded of the 10-year-old boy meeting Bently the Standard Poodle is a precious moment. You can see Junior light up and say, “I love Bently’s color of eyes.”

On November 30th, 2015, Junior’s 12-year-old brother Nano Castro died in a Mt. Hope house fire. Junior suffered over 95 percent burns on his body, his now 7-year-old sister was also burned. Junior has gone through eleven surgeries so fare with more expected. This is his first year back at school full time since the fire.

“I know there is a lot going behind those scars with him,” said Lesia Cartelli, Angel Faces Founder and CEO.

Lesia was burned in a natural gas explosion at age nine, which led her to start  Angel Faces in 2003, a non-profit that helps girls with severe burns.

Lesia's connection with Junior wasn't planned. This week Junior and his family went to visit her office in Encinitas to receive leftover toys from Toys for Tots. When Bently, the Cartelli family dog, and Junior locked eyes, there was an immediate connection.

“Kissing him everywhere, healing kisses is what we call them,” said Isaura Vasquez. 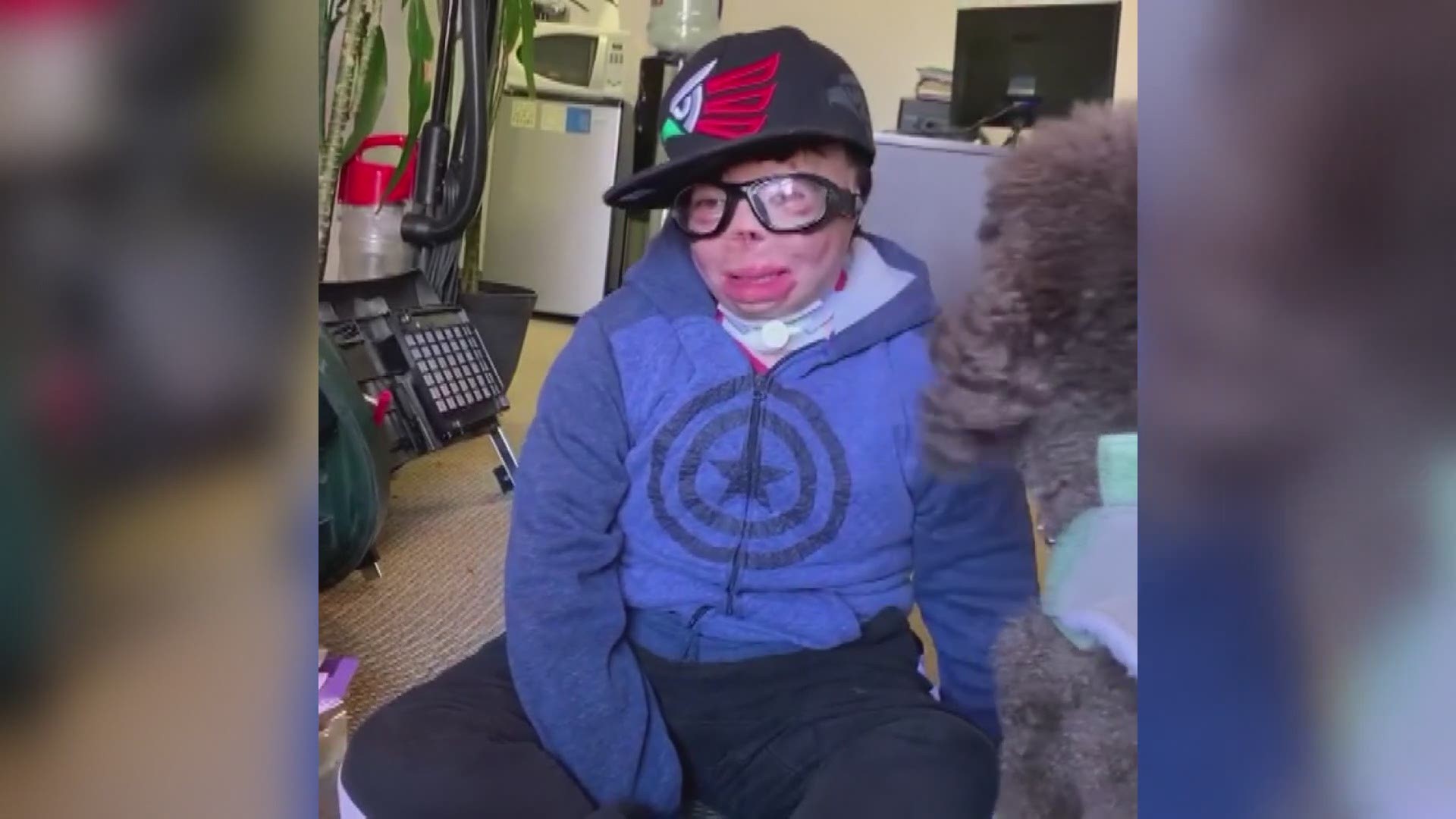 It’s as if this wall where Junior hides behind using his hat and glasses came down when he met Bently.

“Something in that little boy really needed Bentley that day,” said Cartelli.

Another video shows his sister, Esmeralda Nunez Vasquez, 7, giddy to see his brother so happy.

His aunt says this was a special moment for Junior and he smiled all day.

“I took them to McDonald's afterward and he kept saying how beautiful he was and kept smiling about him,” said Isaura Vasquez.

In that moment, Junior didn’t have to think about being different, bullied, or any upcoming surgeries.  All he had to think about was the inspiring healing power between a dog and a little boy.

“Bentley gave him maybe something he has never felt, and that was unconditional love,” said Cartelli.

Angel Faces has helped Junior connect with a plastic surgeon to help him with work on his nose and ears. However, his family says Medi-Cal considers this surgery cosmetic and won’t pay for it. Angel Faces has set up a GoFundMe to help cover the costs.

Post by CBS8AbbieAlford.
Unconditional Love-Jr & Bentley organized by Angelina Vasquez-Marquez
Luis Nunez Jr. survived a house fire in 2015, 95% of his body was burned and disfigured. Since the accident Junior has received numerous functional surgeries but will continue to receive surgeries until he is an adult. Some of the procedures are covered by insurances, but some that are considered cosmetic are not.