Bowling alleys across the nation remain permanently closed but new owners saved Mira Mesa Lanes and it reopened this week. 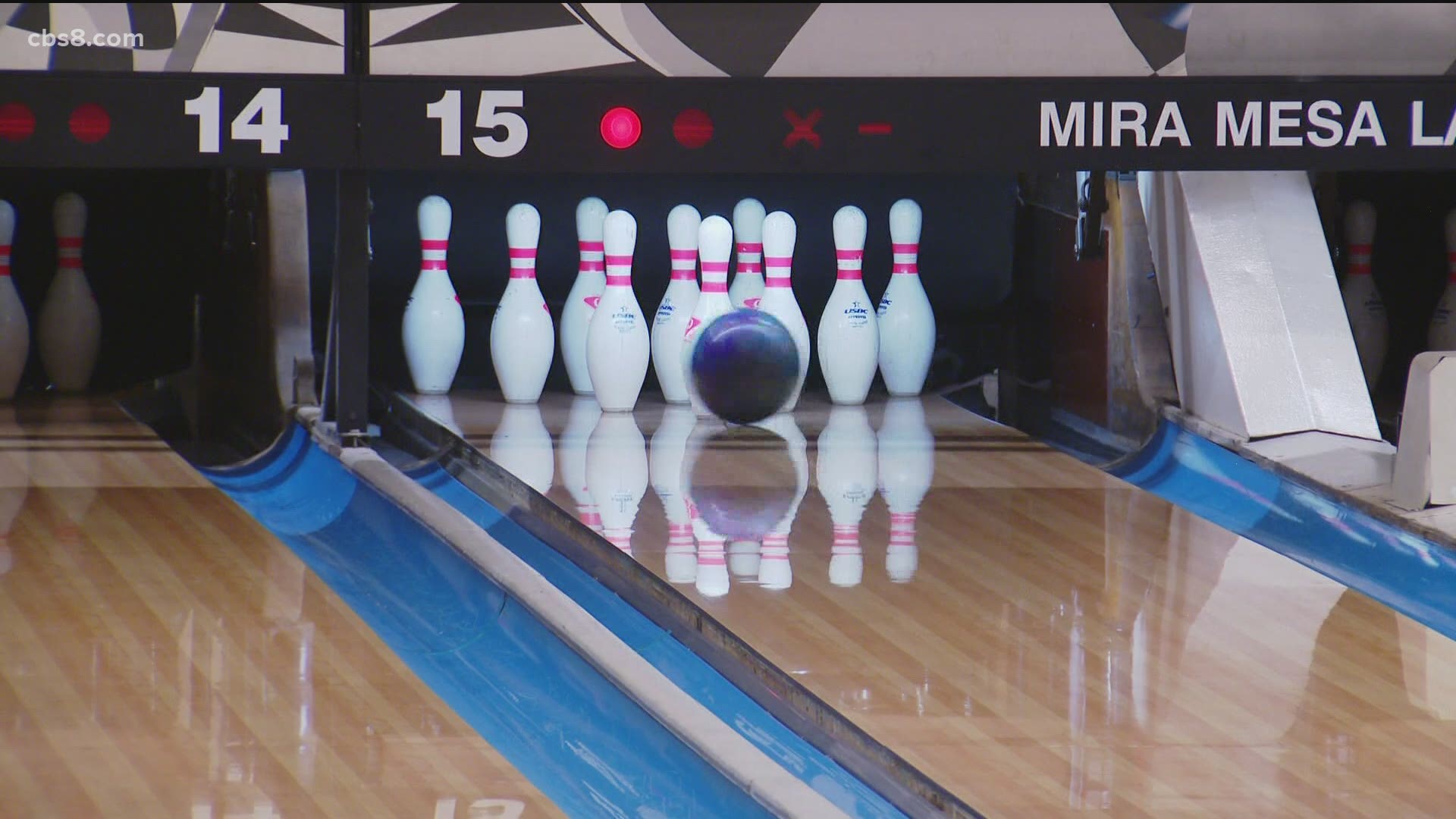 SAN DIEGO — Local bowlers are striking it big and this is the first weekend Mira Mesa Lanes is open since shutting down due to pandemic orders.

It was days away from never re-opening when a professional bowler stepped in to save the family favorite.

“It's like a satisfying sound for us bowlers, to hear the pins fall down,” said Zach Greim, competitive youth bowler.

Mira Mesa Lanes was days away from closing for good when professional bowler Missy Parkin and her husband Drew reached out to the owner.

“We gotta do something in San Diego to save bowling,” said Drew Parkin, Mira Mesa Lanes co-owner.

The Parkin’s and Alex and Elaina Mann bought the beloved bowling alley that’s been around for 50 years.“

To hear the noise, to hear the laughter and see the smiles form everybody behind their masks, it's just awesome,” said Parkin.

The bowling alley is mostly open to just league players and for tournaments but a few hours to the public. Hours will gradually increase for open play.

Under Orange Tier restrictions, bowling alleys are set at 25% capacity which is about 200 people at Mira Mesa Lanes. The Parkin’s say they are keeping it at 22% in case there are walk-ins. No spectators and masks are required, unless eating or drinking.

“The last two nights have been amazing and can't wait to see what the future has,” said Parkin.

For the past year bowling alleys across California have been closed because of the pandemic restrictions.

“The emotional toll it has taken on them, the last year plus has been really hard to watch as a parent,” said Marci Greim, mother of two competitive youth bowlers.

She was behind the GoFundMe to save Mira Mesa Lanes, but two days before it was purchased the $10,000 raised had to be refunded to all donors. The new owners had to pay rent before opening, repair exterior vandalism while closed, paint and adhere to the new health and safety measures.

Greim launched a new GoFundMe to help give back to the owners, so far it's raised $7,700.

“I am hopeful that I can make that as my family's and all youth families and community and all bowlers here in San Diego our contribution to the Parkin's as thank you,” said Greim.

Mira Mesa Lanes has been a second home to the Greim’s, both kids are competitive bowlers. Zach Greim is in the top 10 bowlers under 18 in the country and finished 5th at Junior National Championship.

He will be attending St. Ambrose University in Iowa the fall on a bowling scholarship.

“This is going to be a great opportunity, like a second chance, really to get back out on the lanes and improve my game as much as I can before college,” said Greim.

He also scored a job at Mira Mesa Lanes. The owner says half of the old staff was rehired and the other is from local bowling alleys that permanently closed.

“To be able to hire people back and put money in family's pockets is awesome,” said Parkin.

Mira Mesa Lanes will gradually extend its hours to the public over the next two weeks.

The former owner of Mira Mesa Lanes also owned Kearny Mesa Bowl but the lease was up so the owners did not renew and it will remain closed.

The sound of the ball hitting the pins 🎳 is back at @MiraMesaLanes! It was going to close and was bought at the last minute! Young competitive bowlers are elated! #miramesalanes #bowling pic.twitter.com/jVB78KzoTF

Watch: San Diego businesses on the brink of closing look to GoFundMe as a lifeline